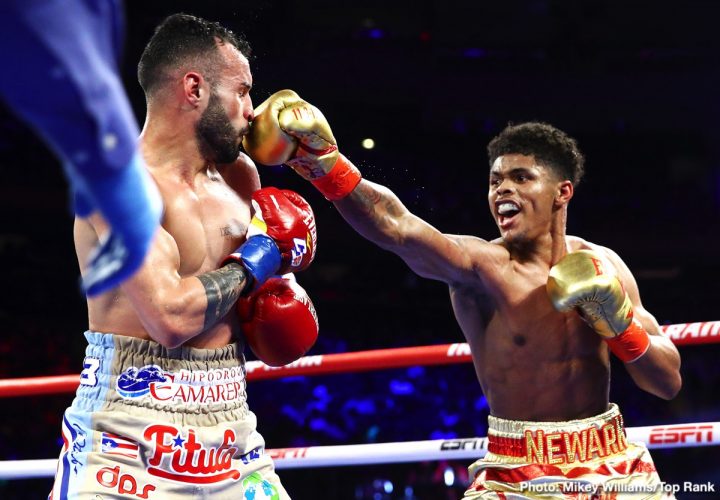 After Stevenson started trash talking him back, Gervonta had to remind him what happened when the two of them were sparring. Stevenson stopped coming back for sparring sessions, according to Gervonta. He didn’t want anymore. It must not have been going well for the light hitting 2016 Olympic silver medalist Stevenson from the sounds of it.

The trash talking between the young Stevenson and Gervonta isn’t going to go anywhere. Top Rank, the promoters for Stevenson, aren’t about to throw him in with a young lion like Tank Davis and watch him get mauled. Shakur needs to develop, because right now he’s too feather-fisted to be in there with the likes of Davis or Miguel Berchelt.

Here’s the conversation between the two from social media:

Tank: “Shakur, you’re good, but stop calling me out, please, and the rest of you babies.”

Shakur: “Chris Diaz was better than Tank’s last three opponents, and I’m just a contender. He’s a WORLD CHAMPION! I appreciate the compliment, though, champ. LOL.”

Tank: “I ain’t calling out a man I’ve been in the ring with several times. Don’t let that go over y’all head. What you saying? You didn’t do s— when we sparred.”

Tank: “MFS stopped coming to spar with me towards the end of camp…Like what we talking about? You know when the little hommies get out of line, you got to tax dat ass. That’s going to be every time you get outta line! Come on wit it.”

Last Saturday, Stevenson (11-0, 6 KOs) beat Christopher “Pitufo” Diaz (24-0, 2 16 KOs) by a 10 round unanimous decision on the undercard of Terence Crawford vs. Amir Khan on a Top Rank Boxing card on ESPN pay-per-view at Madison Square Garden in New York City. The scores for the Stevenson-Diaz fight were 100-90, 99-91 and 98-92. Boxing News 24 scored it 99-91 for Stevenson. He was getting hit with the better shots, but he did a good job of out-boxing the slower, but stronger Diaz. Top Rank is looking to slowly match Stevenson against better opposition. Diaz is a good fighter, but he was recently soundly beaten by Masayuki Ito by a 12 round unanimous decision in a failed attempt to win the vacant World Boxing Organization super featherweight title. The scores were 116-111, 117-110 and 118-109. Ito didn’t beat Diaz as decisively as Stevenson did, but it was close to that.

“I take nothing away from Christopher Diaz. He’s a great fighter, but I came in there to outbox him, and that’s exactly what I did,” Stevenson said.

The hand speed for Stevenson was the difference in the fight. He was quicker than Diaz, and he was able to connect with a lot of shots in out-boxing him.

Stevenson is hoping his promoters at Top Rank will match him against one of the world champions at featherweight. He specifically wants to challenger IBF 126 lb champion Josh Warrington. It remains to be seen if Top Rank will accommodate him or if they can even make a fight like that. Stevenson isn’t ready for the likes of Oscar Valdez, Gary Russell Jr. or Leo Santa Cruz. Those guys have better punching power than Stevenson, and it would likely end badly for him if he were to fight any of them. Russell Jr. is a lot faster than Stevenson.

“Listen, I want all the champions at 126 pounds. Josh Warrington is someone I want to fight. I am ready,” Stevenson said.

GGG: I’m hoping to fight Canelo again title or not »