Eubank Jr. to work with Virgil Hunter for 2 weeks on experimental basis 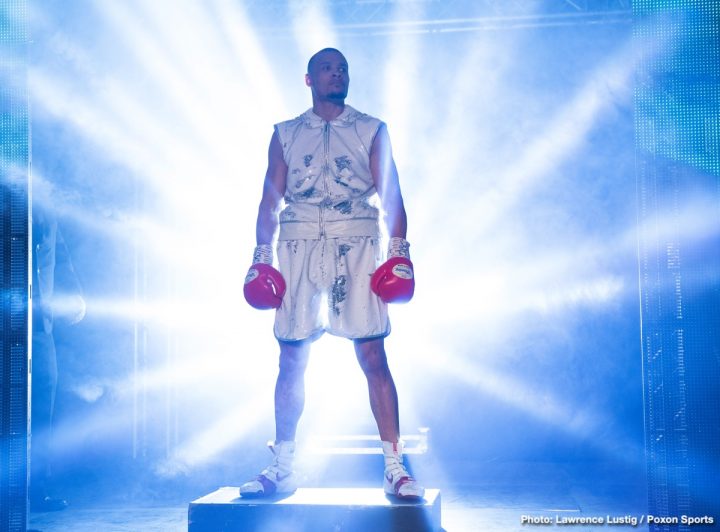 By Trevor McIntyre: Chris Eubank Jr. is in the United States working with trainer Virgil Hunter in the Bay Area in California for the next two weeks to see if he and the American trainer gel. If Eubank Jr. likes what he sees from Hunter, the two could team up for a longer working relationship.

Hunter sees Eubank Jr. as having a similar style as former two division world champion Andre Ward, who Hunter trained his entire career. Hunter believes he can improve Eubank Jr’s game, and to make him a better fighter. Hunter saw some good things from his recent win over James DeGale last February, but he also saw some flaws that he thinks he can fix.

“He has strengths and his infighting style is hard to teach. I can improve that even more because that is how Andre [Ward] boxed,” Hunter said to thesun.co.uk.

Ward had an outstanding amateur background, winning a gold medal in the 2004 Olympics. Eubank Jr. didn’t come from an amateur background like Ward. The two fight nothing like each other. Ward was a much different fighter during the early part of his career. Eubank Jr. is already 29-years-old. When Ward was 29, he’d already been a world champion for six years, and beaten the likes of Carl Froch, Mikkel Kessler, Sakio Bika, Edwin Rodriguez and Arthur Abraham. Eubank Jr. is light years behind Ward’s development at the same age.

Hunter thinks Eubank Jr. looked “flat” against DeGale, and suspects that he was over-trained for the fight. Hunter says Eubank Jr. needs to take some holidays to rest.

As long as Eubank Jr. could listen and follow the instructions from Hunter, it’s a situation that could workout for him. Eubank Jr. has been a guy that has picked up stuff from working out in the gym. He’s never had a great trainer like Hunter. If Eubank Jr. listens and does what Hunter wants him to, then he might be able to make some improvements. The way that Eubank Jr. fought in his loss to George Groves last year in February 2018 in the World Boxing Super Series tournament, Hunter might not be able to improve him enough for him to compete with the lions in the 168 lb division like Callum Smith, David Benavidez, Caleb Plant and Billy Joe Saunders. Eubank Jr. (28-2, 21 KOs) doesn’t need to worry about Groves anymore, because he retired from boxing. But if Groves did come back, he’d likely still have his number.

Eubank Jr. would need to fly over to work with Hunter at his Hayward, California gym each time he wants to train with him. With Hunter training other guys in the Bay Area, he’s not going to fly over to England and exclusively only train Eubank Jr.

Hunter is impressed what Eubank Jr. has accomplished with him not having a dedicated trainer all this time. But when Eubank Jr. has stepped it up against better opposition, he’s come up short in losses to Groves and Billy Joe Saunders.

With Eubank Jr’s win over DeGale last February, he recaptured his old IBO super middleweight title that he lost in his fight with Groves last year.

There needs to be a lot of improvement in Eubank Jr’s game for him to be able to beat the top fighters in the super middleweight division. Hunter is someone that can help Eubank Jr., but he’s not a miracle worker by any means. Some guys have been improved by Hunter, while other fighters like Amir Khan haven’t shown the vast improvement that is needed for him to be a world champion again. Eubank Jr. might need to move back down to middleweight where the fighters don’t hit quite as hard, and aren’t as large as they are at super middleweight. Callum Smith and David Benavidez both look like like heavyweights. Eubank Jr. is going to be out-sized by those two when/if he ever faces them.