Dmitry Bivol to fight in August or September 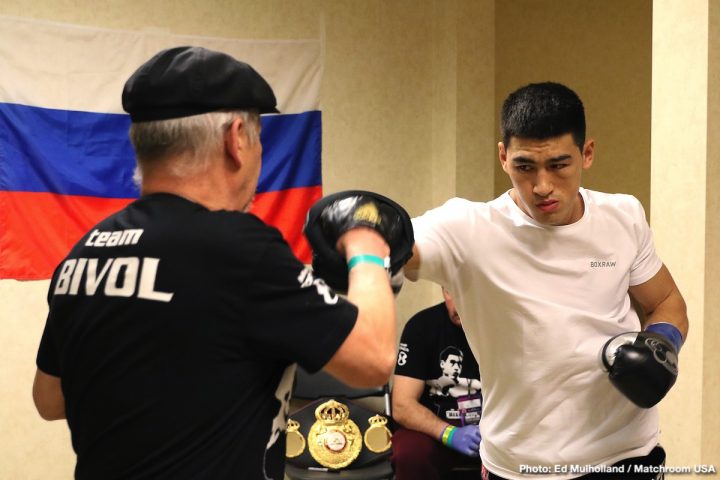 By Sean Jones: WBA light heavyweight champion Dmitry Bivol (16-0, 11 KOs) will be back inside the ring in August or September to make his sixth defense against an opponent still to be determined, according to his manager Vadim Kornilov in speaking to ESPN.

Bivol, 28, isn’t signed with a network platform, so he’s able to drift wherever for important fights. Bivol boxed a masterpiece in his last fight in defeating the powerful Joe Smith Jr. (24-3, 20 KOs) by a one-sided 12 round unanimous decision last month on March 9 on DAZN in Verona, New York. The scores were 119-109, 119-109 and 118-110. However, Bivol was hurt during the fight in the closing seconds of the 10th round when he was nailed with a big right hand shot from Smith that staggered him as the round ended. Smith wasn’t able to capitalize on it though, because the round had ended.

Bivol might be scaring away the other champions with the ease with which he’s been beating hi opposition. Since capturing his World Boxing Association 175 lb title in 2017, he’s easily beaten challengers Trent Broadhurst, Sullivan Barrera, Isaac Chilemba, Jean Pascal and Joe Smith Jr. Barrera and Pascal gave the highly skilled Russian Bivol some problems with their punching power, and with their aggressiveness. In both fights, Bivol built up huge leads, but then saw Barrera and Pascal push hard in the second half of the contest to make it interesting at times.

Bivol has made it clear that he would be interested in moving down to 168 for the sake of getting big fights against the likes of WBA Super World super middleweight champion Callum Smith and Golden Boy Promotions star Saul Canelo Alvarez. However, there’s been little interest on the part of those fighters in taking on Bivol. Canelo does want to fight WBO light heavyweight champion Sergey Kovalev, but he’s not shown the same interest in wanting to face Bivol. It would seem likely that Bivol is looking too good right now for Canelo to want to mix it with him.

With none of the top super middleweights showing the desire to face him, Bivol’s best – and perhaps only – chance of getting a big fight is if one of the other light heavyweight champions choose to face him. We’re talking about IBF champ Artur Beterbiev, interim WBC champ Marcus Browne, WBC belt holder Oleksandr Gvozdyk, and WBO champion Sergey Kovalev.

Here are the options for Bivol’s next fight:

– Sergey Kovalev: As far as Kovalev (33-3-1, 28 KOs) goes, he’s going to be defending his World Boxing Organization title next against his mandatory challenger Anthony Yarde (18-0, 17 KOs) in Russia. The purse bid was canceled on Thursday with the management for the two fighters after they agreed to terms for the fight. The Kovalev-Yarde fight will be taking place in Kovalev’s hometown in Russia. Once Kovalev gets Yarde out of the way, it’s anyone’s guess who he’ll fight next. Canelo Alvarez might be in the picture for Kovalev if he’s serous about wanting to move up to the weight class to face him. It’s hard to imagine Canelo passing up a trilogy fight against Gennady Golovkin in September in order to face Kovalev at 175. It would be a risky fight for the 5’8″ Canelo to take due to the 6’0″ Kovalev’s size, power, mobility and boxing skills. Although Kovalev has lost several profile fights to the likes of Andre Ward [x 2] and Eleider Alvarez in the last three years, he remains a dangerous puncher and a highly talented fighter.

– Artur Beterbiev: The undefeated IBF light heavyweight champion Beterbiev (13-0, 13 KOs) will be putting his perfect record on the line next month against the hard hitting, tough as nails Radivoje Kalajdzic (24-1, 17 KOs) on May 4 in a Top Rank Boxing promoted card on ESPN at the Stockton Arena in beautiful Stockton, California. Beterbiev’s punching power is out of this world. He’s coming off of a fourth round knockout win over KO artist Callum Johnson (18-1, 13 KOs) on October 6 in Chicago, Illinois. That was a war from start to finish. Beterbiev was hurt in the third round by a big right hand from Johnson. Beterbiev came back in the fourth to stop Johnson with a series of hard shots. Top Rank might be open to the idea of matching Beterbiev against Bivol if it’s worth their while.

– Oleksander Gvozdyk: Undefeated Gvozdyk (17-0, 14 KOs) recently took an easy voluntary defense against fringe contender Doudou Ngumbu (38-9, 14 KOs) in stopping him in the fifth round last month on March 30 on a Top Rank card on ESPN in Philadelphia, Penn. Gvozdyk had a grueling fight against former WBC champion Adonis Stevenson that ended in tragedy after the fight was halted in the 11th round. Stevenson collapsed after the fight was halted, and he was taken to the hospital, and ended up in a coma. He survived, but his career is over. Gvozdyk took a lot of hard shots from Stevenson in that fight, and was losing at the time the fight was halted in the 11th. Gvozdyk is another Top Rank fighter. As long as the promotional company is on board with letting Gvozdyk mix it up with Bivl in a unification fight, this match-up could happen. However, Top Rank promoter Bob Arum is genuinely careful with who he matches his top fighters with. In other words, if Arum believes there’s a chance that Gvozdyk will lose to Bivol, he’ll likely not make that fight. As such, probably won’t ever see a unification match between Gvozdyk and Bivol. If Bivol starts looking vulnerable, then there’s always a chance that Arum will put him in with him.

– Marcus Browne: The unbeaten Browne (23-0, 16 KOs) recently defeated Badou Jack by a 12 round unanimous decision on January 19 to capture the interim WBA 175 lb champion and the World Boxing Council Silver light heavyweight title. Browne, 28, is with PBC, and it would be up to them whether they want to have him fight Bivol. They could make that fight or look to face WBC champion Gvozdyk. Of the two, Gvozdyk looks like the more vulnerable guy. He’s been hurt in fights against Stevenson, Tommy Karpency and Mehdi Amar.

– Callum Smith: WBA Super World super middleweight champion Smith (25-0, 18 KOs) has been out of the ring since stopping WBA champion George Groves in the seventh round in the World Boxing Super Series 168 lb tournament last September in Jeddah, Saudi Arabia. Smith will be fighting against an opponent still to be determined on the undercard of heavyweight champion Anthony Joshua’s next fight on June 1 on DAZN at Madison Square Garden n New York. Smith has expressed interest in facing WBO super middleweight champion Gilberto Ramirez if he comes back down to 168. If not, then we could see a fight between him and IBO champion Chris Eubank Jr. in the future. Callum and his promoter Eddie Hearn haven’t been talking of wanting to fight Bivol, which is a good indication that they might not like that fight.

– Saul Canelo Alvarez: As mentioned earlier, Canelo has spoken of wanting to take on WBO 175 lb champion Sergey Kovalev. That could just be bluster on Canelo’s part and not true interest. If Canelo really does want to fight Kovalev, it suggests that he sees weakness there due to the advanced age of the Russian fighter.

– Gilberto “Zurdo” Ramirez: Although Ramirez (40-0, 26 KOs) recently moved up to light heavyweight last Friday night in stopping former world title challenger Tommy Karpency by a fourth round knockout, he’s more dialed into wanting a title shot against the vulnerable WBO 175 lb champion Sergey Kovalev. Ramirez has said nothing of wanting to take on Bivol, and it’s doubtful that even if he wanted to make that fight, Top Rank wouldn’t give him the green light. If Ramirez can beat Kovalev, he would be able to sit on the WBO belt and milk it against the weak contenders the World Boxing Organization have ranked in their top 15.

Boxing » News » Dmitry Bivol to fight in August or September