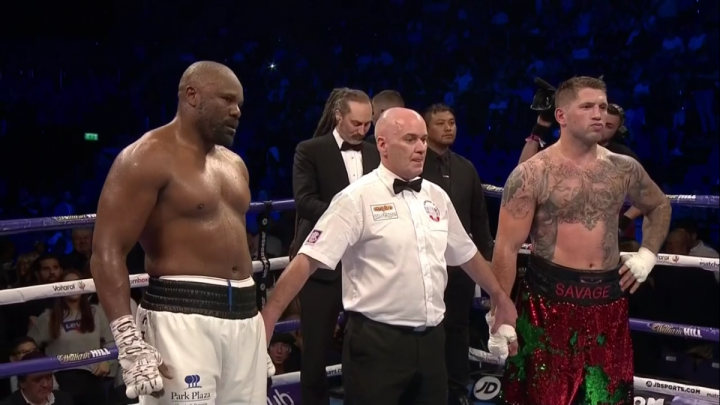 By Charles Brun: In a disappointing performance, former heavyweight world title challenger Derek Chisora (30-9, 21 KOs) defeated an over-matched Senad Gashi (17-3, 17 KOs) by a lopsided 10 round unanimous decision on Saturday night on Sky sports and DAZN at the O2 Arena in London, England.

The fight looked more like a sparring session than a true pro contest, as Gashi, 29, spent the entire 10 round bout circling the ring and spoiling. It looked like Gashi just wanted to survive to go the full 10 round decision, which he accomplished. There weren’t competitive rounds where you could argue that the Spanish Gashi did enough to win it.

The judges scored it 100-90, 100-91, and 99-91. Boxing News 24 scored it 100-90. In hindsight, it was a REALLY bad idea for Matchroom Boxing promoter Eddie Hearn to match Chisora, a slow, ponderous heavyweight with a lot of miles on him, against a young heavyweight with quick feet and not much punching power. Gashi just wanted to elude the 259 pound Chisora, and he did a good job of that. Chisora wasn’t in the best of shape tonight, and that obviously contributed to him being unable to land his badly telegraphed looping right hands all night. In Chisora’s previous fight against Dillian Whyte last December, he weight 247 lbs and was in good shape. Tonight, Chisora was almost 260 lbs, slow, and not nearly quick enough on his feet to cut off the ring to land his shots.

In rounds four through nine, Gashi looked content to circle the ring, and make Chisora look bad by avoiding his easy to see slow right hands. When Chisora would come in close to land, Gashi would quickly tie him up in a clinch. Chisora would try and break free, and occasionally put a forearm across the face of Gashi to dissuaded him continuing to hold, but it was no use. Gashi wasn’t going to try and make a fight of it. He was focused on just surviving.

Gashi threw a few shots in the 10th round, but it was mostly Chisora pushing forward, throwing wild right hands and missing by a mile. Gashi moved around the ring, easily avoiding Chisora’s attempts at forcing him to exchange. Chisora looked exhausted, and frustrated at his inability to catch up to the quick-footed Gashi. If Chisora was younger, and in goo shape, he might have been able to land something. His timing wasn’t there. The hand speed was nowhere to be found for Chisora. During the round, Gashi was hurt from a low blow. it looked like he wanted to quit after that.

This was a terrible fight to watch. Matchroom promoter Eddie Hearn should have known better than to use Gashi as an opponent for Chisora after his recent knockout loss to Carlos Takam. Chisora is getting older now, and he can’t be put in with younger fighters that can move around the ring. We saw that in Chisora’s loss to Agit Kabayel in 2017. Chisora was beat on speed and movement. If Gashi had let his hands go tonight, he would given Chisora problems.

Chisora could be facing former WBO heavyweight champion Joseph Parker next. Off of this performance tonight, one would have to favor Parker to win that one easily.