David Lemieux: ‘Ryder will be a statement fight for me’ 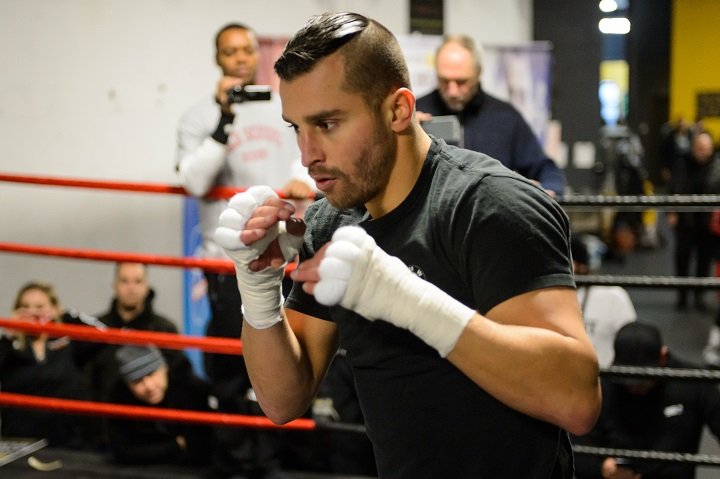 By Mike Smith: David Lemieux says he’s going to use his opponent John Ryder to make a statement on May 4 next month when the two face each other for the interim World Boxing Association World super middleweight title on the undercard of Saul Canelo Alvarez vs. Daniel Jacobs on DAZN at the T-Mobile Arena in Las Vegas, Nevada. The fight will also be shown on Sky Sports.

Former IBF middleweight champion Lemieux, 30, will be moving up to 168 to take on #1 WBA ranked Ryder to lock himself in as the mandatory challenger to WBA ‘regular’ super middleweight champion Canelo Alvarez. #5 WBA Lemieux (40-4, 34 KOs), who is co-promoted by the same company as Canelo in Golden Boy Promotions, doesn’t need to be the mandatory for him to get that fight, but it obviously helps.

“I’ve seen [John] Ryder fight,” said Lemieux to Sky Sports. “He’s a credible rival, but I’m going to make a statement out of what I’m going to do with him. At 168, I’m going to be the strongest that I’ve ever been.”

Lemieux has won his last two fights in beating Gary “Spike” O’Sullivan and Karim Achour since losing to former World Boxing Organization middleweight champion Billy Joe Saunders by a one-sided 12 round unanimous decision in December 2017. That loss to Saunders can partially be attributed to Lemieux struggling to make the 160 pound weigh-in limit for the fight.

Lemieux looked completely drained in making the weight. Afterwards, Lemieux rehydrated and appeared to be overhydrated on the night of the fight. Lemieux looked sluggish and bloated from water intake. He clearly didn’t have his weight right for that fight. Now that Lemieux has moved up to 168, it’ll be interesting to see if he’ll be better off in this weight class. Having an extra eight pounds to play with in going up to 168 should help Lemieux, you never know. Lemieux looks like a fighter that rehydrates into the 180s. Even 168 won’t be an easy weight or him to make.

If Lemieux is strong for this fight like he was in his last contest against Gary O’Sullivan, it could end badly for Ryder (27-4, 15 KOs). Lemieux looked devastatingly powerful in knocking out O’Sullivan in the first round. O’Sullivan lacked the experience needed for him to hold up under the onslaught from the big punching Canadian fighter.

Ryder is already the WBA mandatory for Canelo, but now he’ll be taking this risky, high profile fight against Lemieux for the interim WBA middleweight title on the 4th of May. It’s worthwhile for Ryder, as if he beats Lemieux in an impressive fashion, he’ll make it worthwhile for Canelo to give him a title fight. As of now, Canelo likely won’t bother fighting an unknown like Ryder. Although the British fighter is known back home in the UK, he’s not a household name in the United States.

To get Canelo to pay attention to him, Ryder likely needs to not only beat Lemieux, but do it in which a manner that it gets the U.S boxing fans excited about him. The good news is Ryder has knocked out his last three opponents he’s faced in Andrey Sirotkin, Jamie Cox and Patrick Nielsen. However, none of those fighters are in the same league as Lemieux. Knocking out those guys doesn’t translate into Ryder being able to do the same thing against Lemieux.

On paper, this is a bad match-up for Ryder, as he’s a come forward type of fighter with moderate power, who likes to exchange with his opponents. Ryder has been mostly been able to get away with fighting like that because he’s been fighting a lot of domestic level fighters during his nine-year pro career.

Ryder has tried to step it up a level four times, and been beaten each time in losses to Billy Joe Saunders, Rocky Fielding, Jack Arnfield and Nick Blackwell. Has Ryder improved since his last defeat to Fielding in April 2017? It’s hard to say. The level of opposition Ryder has faced has been lacking to tell whether he’s learned from his previous losses. The punching power hasn’t changed for Ryder, so that suggests that he’ll be in the same bot when he gets in there with Lemieux that he’s been in when he’s faced good opposition in the past.

Ryder earned the WBA mandatory spot last October in beating Andrey Sirotkin by a seventh round knockout. Ryder looked good in stopping the 34-year-old Russian former kickboxer. However, that wasn’t a highly talented fighter. Sirotkin is a former MMA guy, and not an Olympian level fighters with a high pedigree.

“I’m fully focused on the fight with David Lemieux but obviously there’s a massive pot of gold for the winner,” said Ryder. “I’m expecting to win and to win well. I’m there to keep my mandatory position.”

There’s a lot riding on this fight for both guys. Ryder has his guaranteed title shot against the WBA super middleweight champion that he’s risking. Ryder could fight WBA Super World champion Callum Smith or potentially Canelo.

This will be Lemieux’s first official fight at super middleweight against a fighter from that weight class. It probably won’t matter much. Lemieux has faced some good fighters like Gennady Golovkin, Saunders, Marco Antonio Rubio, Hassan N’Dam N’Jikam and Gabriel Rosado in the past. GGG and Saunders are both guys that would likely do a number on Ryder. Lemieux has mixed it at a higher level consistently than Ryder in the past. That doesn’t mean that Lemieux is going to win. It does mean that Ryder is facing a guy that has been there before, and who won’t be in shock when he gets inside the ring on May 4. It’ll be more a case of Ryder needing to adjust to a puncher that he’s never seen before. The biggest slugger that Ryder has been in with as a pro is Fielding, and he doesn’t have the same kind of power that Lemieux possesses. If Rynder gets caught early with one of Lemieux’s big left hooks, could be a quick ending.

Ryder says he’s going to box at times, and slug at other times in this fight. It would be a good idea for Ryder to box early on when Lemieux is at his strongest, and then look to slug later if/when he gets tired.