Crawford/Khan – ‘The Matchmaking Blunder of the Decade’ 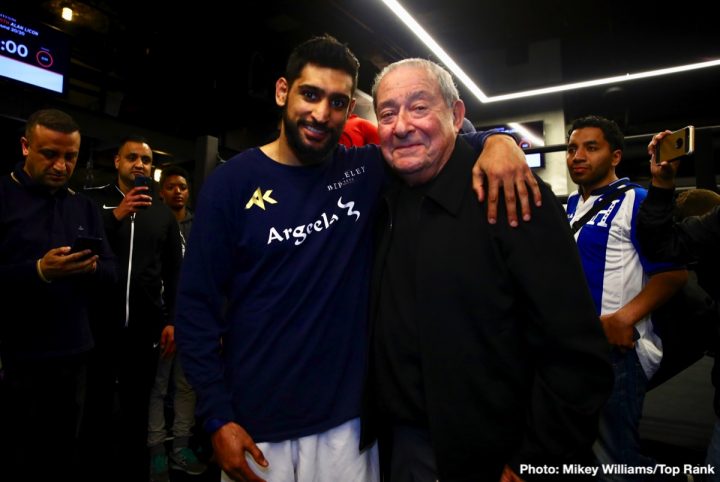 By Darren Paradise: Bob Arum could well be alongside Don King the greatest promoter in the history of this glorious sport. But is the matchmaking for this fight a huge mistake? Does Mr. Arum believe Amir Khan is an easy night’s work for his prize possession? Has he picked Khan for a highlight reel knockout to add to the Terence Crawford portfolio? Whatever the reason this is a lose/lose for Crawford. Just ask Floyd Mayweather.

Khan is the kind of fighter that every challenger would love to fight. Hell with ‘that chin’ they all know that they are just one ‘Hail Mary’ away from a sensational victory and all the opportunities and riches that come with it….But to a reigning champion with the vision of creating his own legacy Khan could be your worst nightmare. Why do you think Floyd never fought Amir Khan? The reason is simply because Floyd is smart. What did Amir ever bring to the table? He was certainly not a deserved candidate for a shot at the GOAT. He had been badly knocked out three times so fighting him was a hiding to nothing in fact it probably only received negative press as a potential mismatch. However, a more in depth look at the fighting style of Khan reveal that stylistically for a non-puncher he is all wrong. He has lightning hand speed, a tremendous work rate and a wealth of experience, in fact he has never actually been losing a fight until he has been stopped? A points victory over Khan is no easy feat for any fighter, including Floyd and he knew it.

Unfortunately we are in an age when once that all important 0 disappears a fighter’s pulling power disappears with it, so you have to ask yourself what exactly does Crawford achieve with this match-up? A win to the casual boxing fan is no more than a ‘given.’ The loss on the other hand is catastrophic. Goodbye to the unification clash with Errol Spence, adios to a megabucks showdown with Manny Pacquiao and sayonara to being the chosen one for any return of Floyd Mayweather.

I like ‘Bud’ Crawford. But Pound for pound number one? Should you not have to beat at least a handful of ‘elite’ fighters to own that moniker? Sure, he is an active fighter that has yet to put a foot wrong, he has solid skills, good speed and power with excellent precision, but on the other hand has the chin, mettle and survival skills ever really been tested?

It maybe that Amir Khan has only had three fights in the last three years and is coming off a poor performance last time out but is he ‘shot’? I don’t think so, and if I am right and Khan can stay out of harm’s way there will be questions asked of Crawford that have never been asked before.

There are plenty of ‘ifs’ in this one, especially where Amir Khan is concerned and Terence rightly is the firm favorite, but hey, I love a little wager and with a line of +1000, I have a feeling there will be a ‘live dog’ in New York City come Saturday night.

Boxing » Amir Khan » Crawford/Khan – ‘The Matchmaking Blunder of the Decade’