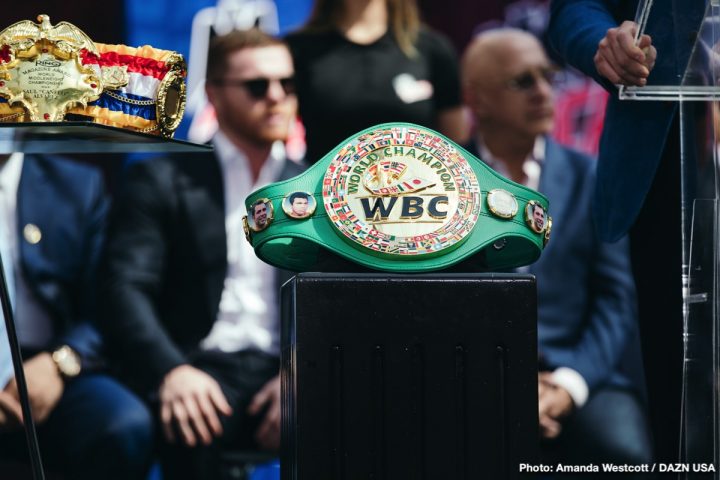 By Aragon Garcia: Saul Canelo Alvarez is looking in fine form in wrapping up his last few days of training before his unification fight against IBF middleweight champion Daniel Jacobs this Saturday night at the beautiful T-Mobile Arena in Las Vegas, Nevada. This fight is not only pay-per-view, which will make a lot of boxing fans happy. The fight will be shown on DAZN.

Canelo, 28, is looking quick on his feet, and he looks faster than before. The head movement that Canelo is showing is a sign that he’s been working on his defense to make sure he stays out of the way of Jacobs’ big punches. Jacobs has power when he’s going after his opponents.

Jacobs sometimes looks less than confident, and he doesn’t seem to realize that he’s capable of ending his fights at any given moment with his power. Jacobs’ punch resistance isn’t what it should be for a fighter at the elite level, and that’s why he fights passively much of the time. Ever since Jacobs’ fifth round knockout loss to Dmitry Pirog in 2010, he’s been fighting in a cautious manner.

If Jacobs fights like that against Canelo, he’ll lose. The judges won’t give Jacobs rounds if he’s looking timid, and he’s not likely going to knockout the steel-chinned Canelo, who has never been stopped before during his career. Jacobs’ best chance of winning is by out-boxing Canelo, and he won’t be able to do that if he’s fighting defensively all night. Canelo being the aggressor will make it easy for the judges to score the rounds.

WBA/WBC champion Canelo (51-1-2, 35 KOs) has been training hard for this fight. It means a lot to him. If he beats Jacobs (35-2, 29 KOs), he’ll have 3 of the 4 middleweight titles in his possession. The only belt that will be out of Canelo’s grasp is the WBO title held by Demetrius Andrade. Putting a fight together with him will be a cinch for Canelo.

Canelo is still wearing a knee brace on his left knee, but his mobility looks fine. He’s not showing problems with that leg in moving around. Jacobs, 32, thinks that Canelo has mobility problems due to his left knee, but that hasn’t been in the case in his recent fights against Rocky Fielding and Gennady Golovkin. Jacobs, 5’11 1/2″, says he’s going to use movement against Canelo to keep him from being able to land his shots. Jacobs is underestimating how well Canelo cuts off the ring in his fights. Jacobs can move a little bit, but he’s not that elusive. Golovkin, Sergiy Derevyanchenko and Maciej Sulecki were all able to cut off the ring with ease to force Jacobs to exchange with them. Canelo will likely be no different.

Jacobs would do better if he conserves his energy and just stands and fights Canelo. That way Jacobs won’t be so ragged, weak and tired looking like he was in his fights against GGG and Derevyanchenko. Jacobs can punch, but he loses his power when he tires himself out by moving a lot. Jacobs looked exhausted against Golovkin and Derevyanchenko during most of the fights due to all the movement that he using. Jacobs was slapping a lot with his shots. Against Sulecki, Jacobs was more stationary, and he was able to sit down on his shots a lot better.