Brook: “Khan will want to fight me now” 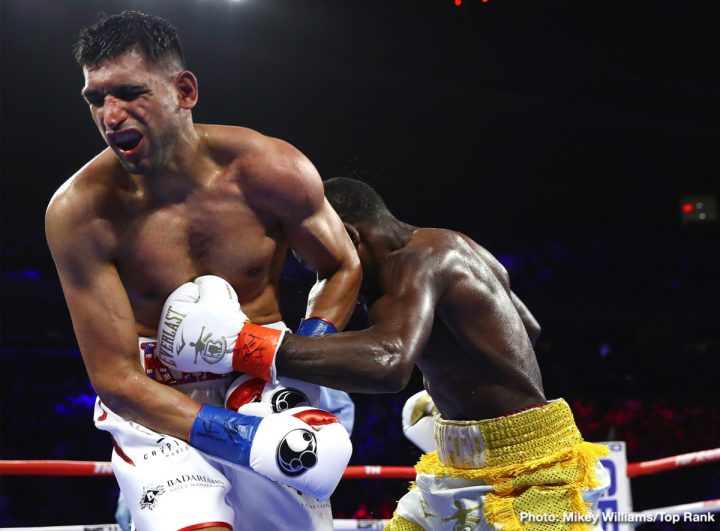 What’s sad is, Brook (38-2, 26 KOs) came to the fight to call out Crawford afterwards, but instead of doing that, he seemed to have a change of mind by saying that he wants to fight Khan, who he feels has no other choice but to fight him now. Brook was sounding REALLY desperate and NEEDY in explaining his theory on what Khan’s next move will be.

Why Brook didn’t take advantage of the situation to go after Crawford is anyone’s guess. It looked like Brook lost his nerve after seeing how impressive Crawford was in dominating Khan.

Khan was hurt from an accidental shot that strayed from Crawford in the sixth. The fight was stopped moments later in a decision made by Khan’s trainer Virgil Hunter. However, Brook has a different spin to make on the ending of the fight. He thinks Khan decided to quit, so the fight because of that reaon.

“I thought he quit. He had five minutes. He just looked for a way out, he were getting beat in every department. He will want to fight me now, he’s got nowhere to go,” said Brook to AB Boxing News.

It’s possible that Brook could be right about Khan having no other options now. If Brook is correct in analyzing Khan’s career options that are available to him, then perhaps he will look to finally make a fight with him. It’s not likely to happen. Brook has hurt his own career badly with his inactivity, and his mismatches against lower level opposition in his last two fights. Khan vs. Brook likely wouldn’t sell in the UK even if they did make it.

What was clear after the fight tonight was that Crawford doesn’t seem at all interested in fighting Brook. Crawford had to know that Brook was there scouting him at ringside at Madison Square Garden, and yet didn’t mention Brook at all. Crawford didn’t bring up Brook’s name inside the ring or at the post fight news conference when asked. The ONLY name Crawford, 31, mentioned wanting to fight next is IBF welterweight champion Errol Spence Jr., and that’s someone that he’s got no chance of fighting, because he’s with Premier Boxing Champions and fights on a different network. Spence was asked tonight on social media if he’ll be fighting Spence in a unification fight next, and he said, “I am [in] my next fight.” Spence’s next fight will be against WBC welterweight champion Shawn Porter. After that, it’ll be against another one of the welterweight champions signed with PBC.

Brook looked completely invisible and unwanted by Crawford after the fight. In the video from AB Boxing News, it looked like Brook was heading out the back door of Madison Square Garden rather than towards the ring or Crawford’s dressing room to call him out. If Brook came all the way to New York with the intent of getting in Crawford’s face to call him out after the fight like he said he was going to do, then he failed miserably. It looks to some fans like Brook changed his mind when he saw how good Crawford looked inside the ring. Brook can’t afford another loss right now with his career, as it would be disastrous. So instead of calling out Crawford, Brook changed his target to Khan, saying that he thinks that he’ll want to see up a fight against him now. Wrong! If anything, Khan will have even loss interest in wanting to fight Brook after he sees how he was ignored by Crawford. Why would Khan want to fight a guy that was passed over by Crawford?

Khan would be better off going after someone like Danny Garcia, Pacquiao, Thurman or Porter rther than Brook. It’s too late for Khan to fight Brook now, because Kell stalled out his career with his losses to Gennady Golovkin and Spence, as well as his mismatches against Sergey Rabchenko and Michael Zerafa.