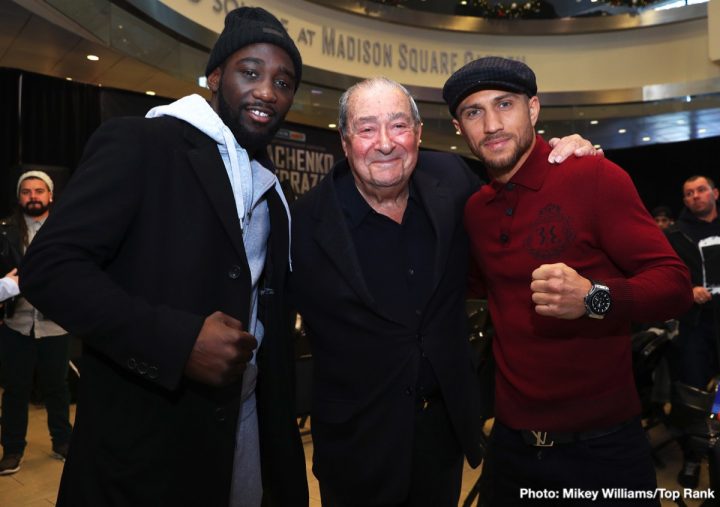 By Chris Williams: Bob Arum is telling the media this week that he plans on calling IBF welterweight champion Errol Spence’s adviser Al Haymon to make the unification fight with WBO champion Terence Crawford after he defeats Amir Khan on April 20 on ESPN PPV at Madison Square Garden in New York. Arum notes that both Crawford and Spence wants the fight, and there’s no reason why it can’t happen.

Arum, who has been comparing Crawford (34-0, 25 KOs) to a young Sugar Ray Leonard, is already talking about having Crawford and Spence fight three times to make a lot of bucks. Arum says he doesn’t mind that the Spence vs. Crawford would be shared between two networks, ESPN and Fox. As long as it’s pay-per-view, the fight will make money like the Floyd Mayweather Jr. vs. Manny Pacquiao fight that took place in 2015, and was televised on HBO and Showtime PPV.

Spence (25-0, 21 KOs) recently defeated superstar Mikey Garcia by a 12 round unanimous decision on March 16 on Fox Sports PPV at AT&T Stadium in Arlington, Texas. The fight is rumored to have pulled in over 400,000 buys on Fox Sports pay-per-view.

“I didn’t think anything of Spence’s performance,” Arum said to Fighthub about Spence’s recent win over Mikey Garcia. “I always knew Spence is an elite welterweight. He’s a very, very good fighter, and I don’t think the same of [Shawn] Porter, and I don’t think the same of Danny Garcia, and I don’t think the same thing about the present [Keith] Thurman. I don’t think they’re elite fighters. Spence is an elite fighter, and that’s why his promoter owes it to the fans to make the fight with Crawford, because I know from having conversations with Spence and Crawford, both young men want to fight each other. And for the promoters to prevent that fight from happening, they aught to be ashamed of themselves. It’s stupid. Let them fight. Let it be a great fight, and look to do a trilogy. That’s the way to really make money,” an excited Arum said in talking rapidly about wanting to do the Spence vs. Crawford fight.

Gee, welterweight champions “Showtime” Shawn Porter and Keith “One Time” Thurman won’t be too pleased at hearing Arum say they’re not elite fighters. Thurman (29-0, 22 KOs) is unbeaten, and up until recently, he was considered the best in the 147 lb weight class. Perceptions change rapidly in boxing, don’t they?

Arum shouldn’t get too ahead of himself in talking up a fight between Crawford and Spence right now. Crawford, 31, still needs to take care of business next week with his fight against former light welterweight champion Khan. That’s a fight that Crawford could lose. Looking at how Arum has matched Crawford all these years, Khan could could run the table with everyone that Arum has matched the Nebraska native against his his entire career. There’s nobody on his resume that Khan wouldn’t have an excellent chance of beating if he were to fight them right now. If Crawford loses to Khan, Arum is going to be stuck talking trilogy fights between those two guys rather than Spence-Crawford.

With Arum, it’s hard to know if he’s serious about wanting to do the Spence-Crawford fight or if he’s merely talking up the fight in order to attract some badly needed interest in the Crawford vs. Khan fight on April 20 on ESPN PPV. By Arum talking up the Spence-Crawford fight right now, he can help get boxing fans excited enough to purchase the Crawford vs. Khan fight on ESPN PPV.

“So hopefully Crawford is successful with [Amir] Khan, and if he is, I promise you in the following week, I will call Al Haymon,” Arum said. “I have his number, and I’ll offer to sit down with him and make that fight. That fight should be easy to make. We have no problem with Fox being the co-distributor with ESPN. It’ll be good to have these two networks plugging the fight. It’ll do massive business, and that’s what should happen. But hey, you can’t dance by yourself, particularly when I know the fighters want to test each other by fighting the other guy,” Arum said.

Spence, 29, has other options for big fights against Shawn Porter, Keith Thurman, Danny Garcia, Yordenis Ugas, Manny Pacquiao and Khan. It’s very likely that Spence’s adviser Al Haymon will look to match him against some or possibly all of those fighters before he turns his attention to matching him against Crawford, if he’s still relevant by that point.

With Crawford now about to turn 32, and still not a star, it’s important that Arum do something drastic at this point to try and get him a fan base. Crawford is popular in Nebraska, but that popularity hasn’t transformed over to the rest of the United States. The reason for that is the match-making, or lack there of, that’s been for for Crawford. When you’re getting matched up with fighters like Dierry Jean, Raymundo Beltran, Felix Diaz, Julius Indongo, Jose Benavidez Jr., John Molina Jr., Viktor Postol, Hank Lundy and Jeff Horn, you’re not going to progress to the next level to become a star.

Arum needs to make a serious push to increase Crawford’s popularity before he gets a little older, and starts getting beaten. Crawford didn’t look at all impressive in his last fight in between Top Rank fighter Jose Benavidez Jr. last October. Crawford looked very, very beatable in that bout against a guy with a bad knee. Crawford was a good light welterweight, but he’s not the same guy at 147. Even at 140, Crawford never fought the lions in the division like Regis Prograis and Ivan Baranchyk. Crawford moved up to light welterweight before they converged on him to take his titles.

We just saw Spence do a Crawford imitation, fighting conservatively, boxing from the outside in his win against Mikey Garcia last March. The southpaw Spence can fight the same way Crawford can, and be “clever,” as Arum says. Spence can fight exactly like Crawford, but he doesn’t like to do it because it’s boring to watch. It’s not exciting to see a fighter stand on the outside, throwing jabs, sticking his tongue out at his opponent, and running around the ring. Spence can do everything Crawford can do, but he chooses not to because it’s not interesting for boxing fans to watch stale style of fighting.

The way Spence looked in his last fight against Garcia, he easily beats Crawford, who looks weak at 147. Spence is too big, too strong and too talented for a fighter like Crawford. The only thing Arum could hope for in a Spence-Crawford fight is for it to be competitive enough for Crawford’s popularity to increase to the level where he wins boxing fans even in losing the fight. If Crawford loses like Mikey or Lamont Peterson did against Spence, it’ll hurt his popularity, such as it is.