Allen vs Browne; Cordina vs Townend at The O2 in London on April 20 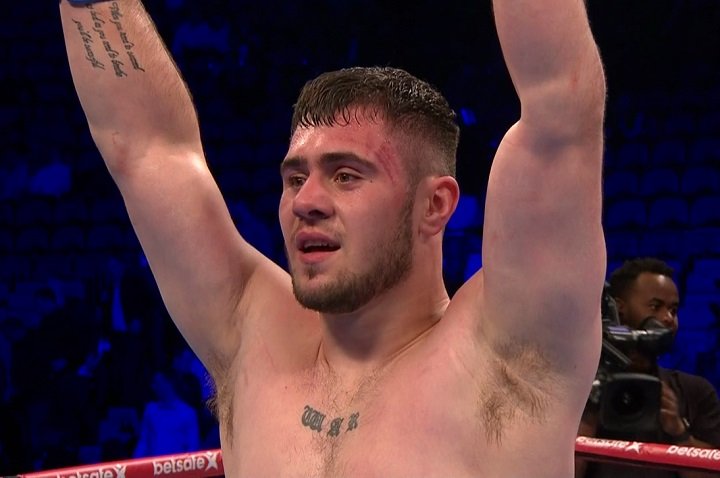 Dave Allen has confirmed that he is looking to pursue a career in professional wrestling once he has hung up his gloves for good.

The hugely-popular Doncaster favourite turned pro in 2012 and has become a cult hero amongst boxing fans with brave performances against the likes of Dillian Whyte, Luis Ortiz and Tony Yoka.

‘White Rhino’ is enjoying the form of his life after claiming successive stoppage wins over Nick Webb, Sami Nebo and most recently Ariel Esteban Bracamonte at the Manchester Arena.

He faces the biggest night of his career on April 20 when he squares off with former WBA Heavyweight World Champion Lucas Browne at The O2 in London, live on Sky Sports and DAZN.

With his record standing at 16-4-2 (13 KO’s), Allen has admitted that he may only have 3 or 4 fights left in him in the paid code, and wants to go out on a high, starting with a big KO over Australia’s Browne.

Allen was left feeling inspired after a recent meeting with legendary professional wrestler Mick Foley, and he has expressed his desire to follow in ‘The Hardcore Legend’s’ famous footsteps.

“Everyone knows my real passion is wrestling – You only have to look at my social media which shows it’s a big part of my life,” said Allen.

“I’ve got a big fight to win on April 20 but the discussions are on-going for me to enter the professional wrestling world for 2020 with various organisations.

“I’m in great shape at the minute and want to box three or four times this year and give it my all. But then I’m up for making the switch and be a crossover star in both sports.

“I met Mick Foley a few weeks ago and that’s only fuelled my fire to follow in his footsteps, it’s not over the line yet but the talks are promising.”

Andy Townend says he is expecting Joe Cordina to “run” when they meet for the British and Commonwealth Lightweight titles at The O2 in London this Saturday (April 20), live on Sky Sports in the UK and DAZN in the US.

Townend (22-4, 14 KOs) is undefeated in six fights since a loss to Cordina’s gym mate Martin J Ward in a failed bid for the British Super-Featherweight title in 2016, and Barnsley’s ‘KO Kid’ is convinced he will be crowned a British Champion at the second time of asking.

Team GB standout Cordina is unbeaten in eight fights since turning over in 2017, picking up the Commonwealth title against Sean Dodd last time out at the Ice Arena Wales in Cardiff. The ‘Welsh Wizard’ is being tipped to reach the top by many but Townend doesn’t buy into the hype.

“Joe has a good pedigree having been part of the Team GB squad for a number of years. It’s a different kettle of fish now he’s in the pro game. There’s longer rounds and tougher opponents. I’ve got more experience than him in the pro ranks but it’s all down to Saturday night. Let’s see what he’s got.

“It’s great to be back on TV involved in such a big show at The O2. To win the British title would be massive for me. Everyone in the gym is doing it now. Robbie Barrett had it and so did Josh Wale, so it would be nice to bring it back home to the gym.”

Joe Cordina wants to come through his vacant British Lightweight title clash with Andy Townend at The O2 in London on April 20 with “flying colours” as he looks to continue his march towards a dream World title shot.

Cardiff’s ‘Welsh Wizard’ is aiming to add a third belt to his collection when he collides with Barnsley’s ‘KO Kid’, live on Sky Sports in the UK and DAZN in the US, and the Cardiff man knows landing the Lord Lonsdale Challenge Belt would be another major step on his way to World glory.

“It’s no secret, I didn’t get into this sport just to win a British title,” said Cordina. “Some people only have ambitions of winning a British title, and that’s fine, but I want so much more than that. To get where I want to be in boxing I need to win this title so it pushes me towards bigger and better things.

“First of all, I need to win this fight on April 20 and I need to come through it with flying colours. I’m in no way overlooking the challenge I’ve got on my hands. Andy is known as a big puncher, he likes to come out fast and wing them away. I was meant to fight him in my fifth fight, so we know what he’s all about.

“We’ve prepared for the best Andy Townend that there could possibly be. If he wants to stand in the middle of the ring and trade, then I’ll meet him head on. If he wants to come after me then I can box him. If he wants to go back then I’ll take it to him. I’ve absolutely smashed this camp out of the water and I’m ready to go now.”

Cordina hasn’t fought since he claimed the Commonwealth Lightweight crown against Sean Dodd at the Cardiff Ice Arena last August, but the 27-year-old former Olympian insists he won’t have any rust after eight months out of the ring.

“I was meant to fight Scotty Cardle on the Usyk vs. Bellew undercard in November but a hand injury late into my training camp forced me out of the fight,” he added. “Having seen what Ricky Burns did to Cardle, I think I would have done the same, maybe not as quick as Ricky but I had every confidence in myself to do a number on him.

“I don’t think my time out of the ring is going to affect me at all. I did a full camp, all I missed out on is a few rounds on November 10. I was ticking by while I was injured, doing my running because I had a cast on my hand. As soon as my cast came off I started shadow boxing, then we started hitting bags lightly, then pads and sparring.

“I’m going to box just how I need to box to get the win. I’m going to try and win in style but if it comes down to it and I have to grind out a result then I’ll grind it out. All I’m going to do is win and put a performance on. For me it’s all about getting that British title under my belt.”

Nikita Ababiy will make his UK debut at The O2 in London on April 20 on the undercard of Dave Allen’s showdown with former WBA Heavyweight World Champion Lucas Browne and Derek Chisora’s clash with Senad Gashi, shown live on Sky Sports in the UK and DAZN in the US.

The 20-year-old Brooklyn talent known as ‘White Chocolate’ has made a perfect start to life in the paid ranks, winning his first three fights by first round knockout. A former Team USA star, Ababiy doesn’t want to waste any time on his quest to become a World Champion and is aiming for another big knockout in the Capital.

“I’m excited to fight in front of the British fans on April 20,” said Ababiy. “I want to become a global star and a Middleweight World Champion over the next few years. I’d like to thank my manager Keith Connolly, Eddie Hearn and Matchroom Boxing for the massive opportunity. I’m looking for a sensational knockout to show the fans in England that I’m a future superstar.”

“Nikita has been electric since he turned pro with 3 devastating first round knockouts in his opening 3 fights,” said Eddie Hearn. “I believe we have by far the most exciting young talent Worldwide and it’s important they get the experience and profile of boxing in key markets around the World. It’s also great for UK fight fans that they get to see fighters like Nikita up close as they begin their journey. I expect him to light up The O2 on April 20.”

Ababiy makes his UK debut on a huge night of boxing in the Capital.

Boxing » Press News » Allen vs Browne; Cordina vs Townend at The O2 in London on April 20