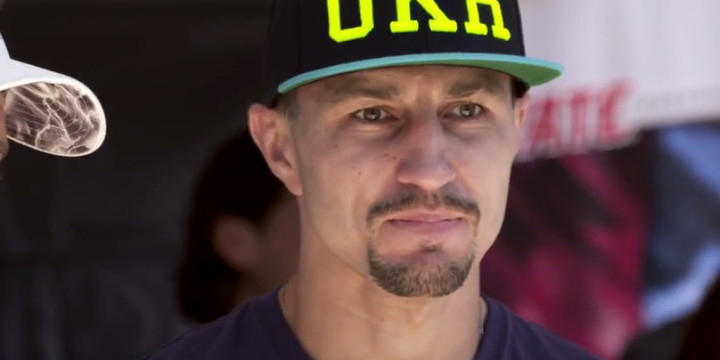 Postol, 5’11”, vs. Mimoune, 5’10”, will be a battle of tall, lanky light welterweights with little punching power. Postol recently lost a close 12 round decision to Josh Taylor last June at The SSE Hydro, in Glasgow, Scotland in a fight that was much closer than the scores handed in by the three judges. The judges had Taylor, who comes from Scotland, the winner by the scores 117-110, 118-110 and 119-108. Taylor looked like he won the fight by two points in the view of a lot of boxing fans.

The WBC has made a mess of things with all the contenders that are already waiting for their title shot against WBC light welterweight champion Jose Ramirez. Regis Prograis (23-0, 19 KOs) captured the interim WBC 140 lb title last year in March in stopping former IBF/WBA light welterweight champion Julius Indongo by a 2nd round knockout. Prograis, 29, was supposed to be getting a title shot against Ramirez, but Top Rank Boxing wanted to let the fight marinate, Prograis wasn’t interested in stalling his career out with that lengthy process, so he entered the World Boxing Super Series light welterweight tournament, which he’s still taking part in. Last June, Josh Taylor defeated Postol by a 12 round decision to become the WBC mandatory challenger to Ramirez. As such, Prograis and Taylor are in line to get cracks at Ramirez. The winner of the Postol vs. Mimoune fight will be a SECOND mandatory for Jose Ramirez. That would mean three fighters are waiting for Ramirez once the smoke clears from the Postol-Mimoune fight. Ultimately, none of them may get a shot against Ramirez, as he’s talking about wanting to move up to welterweight soon to go after the likes of WBO champion Terence Crawford.

Postol fought Taylor to a standstill. The deciding factor in the fight was the 10th round knockdown Taylor scored after nailing the Ukrainian Postol with a left hook to the head. Postol rebounded from the loss to Taylor in defeating Siar Ozgul by a 10 round points decision last November in Scotland. It’s quite possible that Postol and Josh Taylor will meet up in the near future. Taylor, Postol, Regis Prograis and Ramirez all play into the future of the light welterweight division.

France’s Mimoune, 31, has won his last 10 fights since losing to Alexandre Lepelley by an eight round split decision six years ago in 2013. Along the way, Mimoune has beaten the likes of Sam Eggington, Ceferino Rodriguez, Emiliano Dominguez Rodriguez, Jussi Koivula and Franck Petitjean.

Artur Beterbiev set to fight for Top Rank on ESPN »