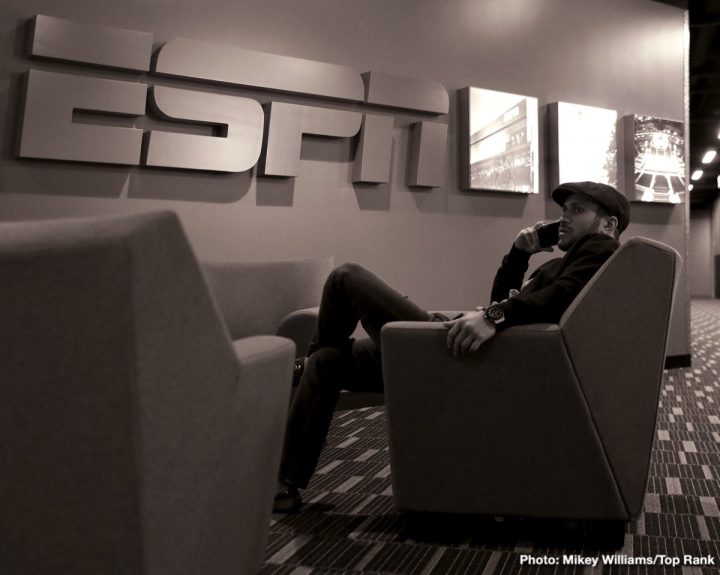 By Chris Williams: Vasyl Lomachenko (12-1, 9 KOs) isn’t facing the fighter that he wanted to in IBF lightweight champion Richard Commey on April 12, so instead he’ll be defending his WBA/WBO 135 lb titles against his WBA mandatory challenger Anthony ‘Million Dollar’ Crolla (34-6-3, 13 KOs) on that date on ESPN+ at the Staples Center in Los Angeles, California. The start time for the Lomachenko vs. Crolla fight card is at 11:00 p.m. ET / 8:00 p.m. PT.

Not fighting in front of his home British boxing fans in the UK is obviously a disappointment for Crolla, who will be fighting on foreign soil for the first time in his 13-year pro career. Crolla’s fans will have to travel in order to see him take part in this HUGE fight in the United States. That’s a long flight, a big expensive, and a lot of hassles for Crolla’s fans. On the positive side, Crolla won’t be seen live losing to badly to Lomachenko by a lot of the fans. If the fight had taken place in the UK, there would be a lot of unhappy Crolla fans if he ended up quitting or being pulled put by his trainer when the fight gets a little too out of hand.

“Staples Center is the perfect venue to showcase one of boxing’s great fighters, Vasiliy Lomachenko, who will test himself against a top contender in Anthony Crolla of Great Britain,” Top Rank promoter Bob Arum said.

This is a move by Arum to try and turn Lomachenko into a star in Southern California. It’s been almost two years since Lomachenko fought for the first and only time in Los Angeles when he fought fringe contender Miguel Marriaga in August 2017. Lomachenko outclassed Marriaga until the fight was stopped in the seventh. Marriaga was so badly over-matched in the fight that it wasn’t particularly entertaining to watch. If Lomachenko wants to become a star in the Southern California area, he needs to slug more and box less. He’s too technical at times in throwing pitty pat shots, and he doesn’t load up enough the way that boxing fans in Southern California like to see from their fighters. Gennady Golovkin was able to win over a lot of boxing fans in Los Angeles by him putting himself in harm’s way to slug with his opponents to try and produce knockouts. Lomachenko needs to fight like this if he wants to become a big star in that part of California.

It’s not a great fight, but it’s one that’s available to Lomachenko, and one that he needs to get out of the way, given that Crolla, 32, is his World Boxing Association lightweight mandatory.

“I am genuinely going over to LA to shock the world,” Crolla said. “Preparing for Lomachenko is hard because he’s so unorthodox…He’s that good that when he does something wrong he gets away with it.”

Lomachenko is starting not to get away with the mistakes that he makes in his fights. Jorge Linares knocked him down in the sixth round in their fight last May when he walked straight into a punch with his hands down. In Lomachenko’s last fight against Jose Pedraza, he was eating jabs and power shots the entire fight last December. Vasyl was getting hit too much, and not looking the fighter he’d been in most of his other fights in his six-year pro career.

After being talked about for weeks, Lomachenko vs. Crolla was made official on Monday for April 13 on ESPN+. This is a fight that Crolla, and his promoter Eddie Hearn of Matchroom Boxing want, but it’s not a fight that the general public is intrigued about. Crolla is old news since his back to back losses to Jorge Linares two years ago in 2016 and 2017. Crolla has done a good job of clawing his way back to earn a title shot against Lomachenko, 31, but he didn’t have to fight anyone dangerous to get the mandatory position with the WBA.

Since his Crolla’s two losses to Linares, he only had to beat these guys to get the spot as the mandatory for Lomachenko: Daud Yordan, Edson Ramirez and Ricky Burns. Missing from those names are the talented lightweights in Teofimo Lopez, Luke Campbell, Devin Haney, Jorge Linares, Robert Easter Jr. and Rances Barthelemy. Crolla might have been able to beat some of those guys, although this writer doubts it very much. Crolla isn’t the type you can throw in the ring with a guy like Teofimo Haney, Linares, Easter Jr., Campbell or Barthelemy and expect him to come out with his hand raised. Those guys have too much talent, and Crolla lacks power and is getting up there in age.

Still rated as the #1 pound-for-pound king despite two off performances recently against Jose Pedraza and Linares, the two-time Olympic gold medalist Lomachenko will be looking to start looking impressive again for his title defense against Crolla.

Some boxing fans see this fight as a retirement payday for Crolla, since he’s got so little chance of winner or even being competitive to any great extent. The fans think that after Crolla gets whipped by Lomachenko, he won’t want to get back in line to slowly work his way to another title shot. It took Crolla two years to earn this title shot against Loma after losing to former WBA World lightweight champion Jorge Linares in March 2017. If Crolla is able to keep fighting at a high level, he could work his way back to another world title shot by the time he turns 34 in two years. It won’t be easy, but it’ll be doable for Crolla, as long as he wants it, and his promoter Eddie Hearn helps out by putting pressure on the sanctioning bodies to put him in another world title eliminator. If Crolla is going to retire, it won’t be off of a loss to Lomachenko. Crolla will go back to the UK, and then look to fight likes of Luke Campbell or former IBF featherweight champion Lee Selby in front of his fans in Manchester, England. Crolla will want to bow out in front of his own fans in Manchester rather than letting his contest against Lomachenko in the U.S being his final fight of his career.

The fans want to see Lomachenko focus on fighting talented guys like Teofimo Lopez rather than wasting time making useless title defenses against former champions that are over-the-hill. The fans don’t care much about seeing Crolla fight guys like Crolla, and Richard Commey. The fans want to see Lomachenko take the fight with Lopez, and then either move up to face someone like Regis Prograis or move back down to super featherweight to fight Gervonta ‘Tank’ Davis and Miguel Berchelt.

NEWS:   Lomachenko vs. Lopez peaked at around 3 million viewers on ESPN

On the undercard of Lomachenko-Crolla, WBO super middleweight champion Gilberto ‘Zurdo’ Ramirez will be stepping up in weight to light heavyweight to fight against someone that will be named later in a 10 round fight. Ramirez might move up on to 175 on a permanent basis if he looks good in this fight. Ramirez has got to look good in this fight, which prove to be difficult unless he’s put in with a stationary fighter that lacks hand speed and punching power. Ramirez does well against fighters that stand in one place, and have little in the way of size and hand speed. Top Rank Boxing promotions has done an incredible job of matching Ramirez against guys that he can shine against in having him defend his World Boxing Organization 168 lb title against these fighters in the last three years: Roamer Alexis Angulo, Jesse Hart, Max Bursak and Habib Ahmed.