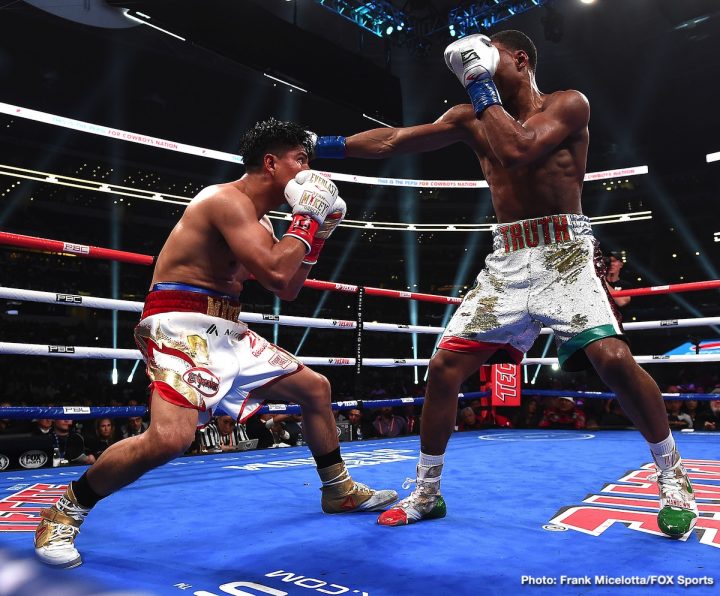 By Dan Ambrose: Errol Spence’s trainer Derrick James said he asked Mikey Garcia’s corner to stop the fight at the start of the 11th round to save their fighter from taking any additional punishment in the Spence-Garcia fight on March 16 at AT&T Stadium in Arlington, Texas.

Mikey looked fat, slow and out of shape for the fight, and totally unlike what normal welterweights look like in terms of their physiques. All the training that Mikey did at the SNAC facility to bulk up with muscles was a waste of time, because it didn’t increase his speed or power, and he put on a lot of fat instead of muscle weight.

“He didn’t have a chance to win the fight,” Derrick James said to Fighthype about Mikey Garcia in talking about how one-sided the fight had become by the 11th round. “He wasn’t going to catch him with a shot at that point. He was still fighting, but he wasn’t showing much offense. It wasn’t the size. It was the skill set. It was the 11th round. How do you let a guy take so much punishment?” James said in talking about how he told Mikey Garcia’s to stop the fight to save their fighter from taking punishment.

It was surprising that Mikey’s trainer Robert Garcia didn’t stop the fight in the ninth round when he started getting whipped by Spence. In the first eight rounds, it was understandable why Robert Garcia wouldn’t want to stop the contest at that time. Spence was mostly jabbing, and putting on a masterclass performance. However, from the 9th round on, Spence took the fight to Mikey, hammering him with power shots, and making him look like a guy that didn’t belong inside the ring with him.

Robert not stopping the fight in the ninth round is what seemed strange to a lot of people. Things got worse for Mikey from the ninth round on, as he was taking withering fire from Spence, and not coming back with anything significant. Mikey only landed 75 punches in the entire fight. Given that Spence was throwing close 100 punches per round, it kind of puts things in perspective. It was total rout. Robert had pulled the plug on Mikey’s fight with Orlando Salido in 2013, and he took way less punishment against him than he did against Spence.

The general belief by the boxing fans is Mikey was just trying to survive to see the final bell in the 12th round instead of trying to actively get the victory.

Mikey has been giving a lot of interviews since his loss to Spence. Perhaps Mikey will come out later after he feels more comfortable to talk about his loss.