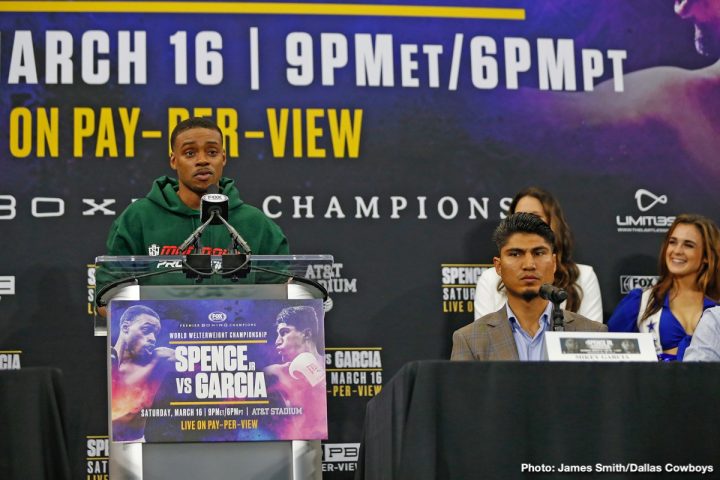 By Jim Dower: Errol Spence sees himself destroying Mikey Garcia in a “one-sided massacre” come Saturday night at the AT&T Stadium in Arlington, Texas. A testy sounding Spence (24-0, 21 KOs) showed flashes of anger/annoyance at Garcia (39-0, 31 KOs) at their final press conference on Wednesday, letting him and the boxing media know that this is not going to be a competitive fight, and there won’t be an upset.

Spence, 29, isn’t going to have a big advantage in the weight department over Garcia come Saturday night. If Spence is going to win, it’s going to be due to his natural strength, and height advantage. Spence says he’ll be coming into the fight around 160 pounds after he rehydrates. Mikey is expected to be anywhere from 152 to 155 lbs. If he comes into the fight at 155, there would be only five lbs separating the two fighters.

Close to 35,000 tickets have been sold for the Spence-Garcia fight for AT&T Stadium in Arlington, Texas. There will be a lot of tickets sold on the night of the fight. It won’t be surprising if 50,000 boxing fans pack the stadium on Saturday. Since the stadium seats 100,000, there’s no worries about the tickets selling out.

“On Saturday night, he’s going to find out why I chose to fight him and why I picked this fight,” said Mikey in trying to explain why he volunteered to fight Spence. “Like all my other opponents, they don’t see anything flashy. They don’t see anything special. But when they get inside that ring, they realize I am special in a different way.”

Spence didn’t go for that comment by Mikey, especially the part where he referred to him as one of his opponents.

Here’s what Spence had to say in response:

Mikey then came back with this reply:

“You will be another opponent on Saturday night.”

Mikey believes that he’s gotten into Spence’s head with his trash talking, and with his ability to answer back each time Errol has made a negative comment about him. Mikey views it as a minor victory that Spence is no longer seeing himself scoring a fast knockout, as he thinks he’s gotten into his mind now. Spence will likely still be looking to knockout Mikey as early as possible on Saturday. The trash talking isn’t going to change that. Spence out that he could have a friendly conversation with Mikey, and still want to rip his head off moments later when they step inside the ring. Spence compartmentalizes things, and doesn’t let past conversations float around inside his head while he’s inside the ring fighting. In other words, Spence treats boxing as a sport, and not as psychological arena. If Mikey is going to beat Spence on Saturday, he’s going to have to do it by fighting rather than talking his way to a victory.

“Maybe the exchange of words might’ve changed his attitude to say it was going to be a quick knockout,” Mikey said. “A lot of things might be going around his head. I know I’m ready to do whatever it takes for me to win this fight.”

Mikey might be better off forgetting about trying to get an edge by trash talking Spence. That’s probably not going to work. It’s been seven years since Spence last lost a fight in the 2012 Olympics in losing a close 16-11 score to Andrey Zamkovoy. That was in the amateurs, and Spence was wearing down his opponent in a big way as the fight was ending. It’s pretty clear from watching the fight that Zamkovoy would lose to Spence by early knockout if the two fought each in the pro ranks. Zamkovoy used a lot of movement to evade Spence in the first two rounds to build up a lead on him. Spence was cutting off the ring and wearing Zamkovoy down with his pressure as the fight ended. Mikey is going to have to use movement against Spence if he doesn’t want to get taken out like Spence’s other opponents. It’s not going to work for Mikey to try and talk his way to a victory. That works against lesser opponents, but not against a world class fighter like Spence.