Robert Garcia: ‘Mikey Garcia will be stronger, Errol Spence is not on weight’ 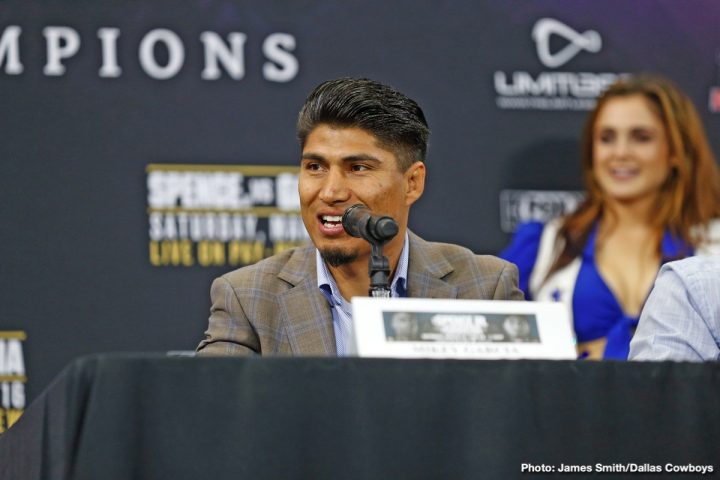 By Dan Ambrose: According to Mikey Garcia’s trainer Robert Garcia, Errol Spence Jr. isn’t on weight for Friday’s weigh-in tomorrow, and he still has 10 pounds to go before he’s down to the 147 lb limit.

The effort that Spence is going to be making to lose the last 10 lbs is going to potentially deplete him, resulting in Mikey being the stronger fighter inside the ring on Saturday, is the idea Robert is coming forward with. It sounds like Robert is getting desperate now that fight is almost here.

Spence always has to cut a lot of weight to make the 147 lb weigh-in limit for his fights, and it has never impacted his performances up until now. After Spence rehydrates, he’s as powerful as always. Why this fight would be any different for Spence is open for debate.

It could be the Robert is playing mind games to try and upset Spence so that Mikey can get an edge over him. We’ve seen that before from Robert with him making a big production about inspecting the gloves of Mikey’s opponents. Robert is pretty crafty. He might want to either weaken Spence by having him dehydrate too much or plant a seed of doubt in his mind about him not being powerful as he normally is due to weight.

It’ll be interesting to see if what Robert says about Mikey being the stronger fighter of the two turns out to be correct. If Spence is the weaker fighter, Mikey is going to be able to have his way. Of course, even if Spence is weaker, it won’t be by much, and he could give Mikey all kinds of problems if he targets his body with his shots.

Robert says Spence (24-0, 21 KOs) is going to be weak by the time he does make weight – if he does – for Saturday’ fight on Fox Sports pay-per-view at the AT&T Stadium in Arlington, Texas.

“Nobody’s on weight right now. (Errol) says he’s on weight, definitely not on weight,” Mikey’s trainer Robert Garcia said to Fighthub. “He’s [Spence] got at least 10 lbs to go. That’s what everybody cuts, 10 to 12 lbs the night before the weigh-in. Mikey doesn’t have to do that. He does that at lightweight. Now at 147, Mikey’s walking around two or three pounds [above 147 lbs], no more than that, so he’ll be the stronger man because he’s not going to lose any weight. Errol Spence has to cut weight, Mikey doesn’t have to cut weight,” Robert said.

Robert talking about Mikey being the stronger fighter sounds like he’s dreaming.

Ideally, Mikey shouldn’t be taking what Robert says about him being the stronger fighter than Spence as the 100 percent truth on Saturday, because it could end badly for Mikey if he really does believe he’s the stronger puncher than Spence. If Mikey plows forward looking to go toe-to-toe with Spence, he might not last more than one or two rounds taking that approach to the fight.

Mikey could end up like Chris Algieri 2.0. Spence mowed Algieri down in five rounds when he attempted to slug with him in their fight in April 2016. As long as Robert Garcia has pulled Mikey aside to let him know that he’s just trying to mess with Spence’s head by saying that he’ll be the weaker fighter on Saturday, then it won’t be so bad. But if Mikey actually does believe that he’s going to be stronger than Spence, he’s going to wind up getting torn apart.

Mikey has to know that the punishment he’s going to take in this fight is going to at a level he’s never experienced before. The punishment that Mikey absorbed against Sergey Lipinets last year will be nothing in comparison to what he’ll likely be experiencing against Spence, and that’s just reality of it. Lipinets isn’t a big puncher compared to some of the other fighters like Regis Prograis, Kiryl Relikh and Josh Taylor at light welterweight, and yet he had Mikey looking like he’d been stomped on.

NEWS:   Amir Khan: 'I can fight Errol Spence if I want'

Mikey’s face was swollen badly, and bloody. He looked like the loser of the fight. In contrast, Lipinets was unmarked, and just looked like he’d gone for a light run. If a light puncher like Lipinets could do that to Mikey, then what’ll Spence do to him? Even if Robert is correct with Spence not being as powerful as he normally is, he’s still going to be a MUCH bigger puncher than anyone that Mikey has ever fought before during his career, and likely ever will fight.

Robert needs to be ready to pull Mikey out of the fight when he starts getting beaten like he did in pulling him out of his fight with Orlando Salido in 2013 when things started coming apart at the seams for him. Robert has said anything about having a backup plan for Mikey is things going well for him. Hopefully, Robert has a alternate plan that he can have Mikey use to keep him from getting pounded into oblivion by Spence. Clinching nonstop would be an option for Mikey, as would moving a lot.

It’s unclear whether either of those strategies would work against a fighter as powerful as Spence. He’s so much bigger than Mikey. If Mikey tries to hold Spence, he’s not going to be able to pin both of his arms down to keep him from punching in the clinch. When fighters clinch Spence, he hits them with his free hand in the midsection as hard as he can repeatedly until they let go of him. If Mikey tries to clinch excessively as a survival tool, Spence is going to light him up with body shots, and he might drop for the 10 count at that point. Robert is going to need several plans he can have Mikey try.

Spence has been saying that he’ll be around 160 lbs on fight night. He could be even heavier at 170 lbs. It’s obviously not easy for him to make weight for the welterweight division, but it’s highly unlikely that he’ll come in over the limit and/or be weakened from draining down in weight. Spence is so much bigger. When he’s on the outside throwing his jab, he’s dominating. If Spence is weak for the fight, it won’t stop him from jabbing Mikey to pieces from the outside and still scoring a knockout. However, nothing will likely change from this fight. Spence is a thin fighter, and those type of guys are able to make weight without being weakened. The fight will be more entertaining if Spence is weight drained, because it would give Mikey a handicap, which he badly needs for him to have a shot at winning on Saturday night. but just because Robert Garcia is saying that Mikey will be the stronger fighter doesn’t make it so. It sounds like Robert is trying his best to play mind games, feeling that it’s necessary for his brother Mikey to have a chance in the fight. If Mikey doesn’t have the talent to win this fight, then there’s nothing Robert can do about it. There’s nothing that Robert can say that will give Mikey the talent to win if it’s not there already.