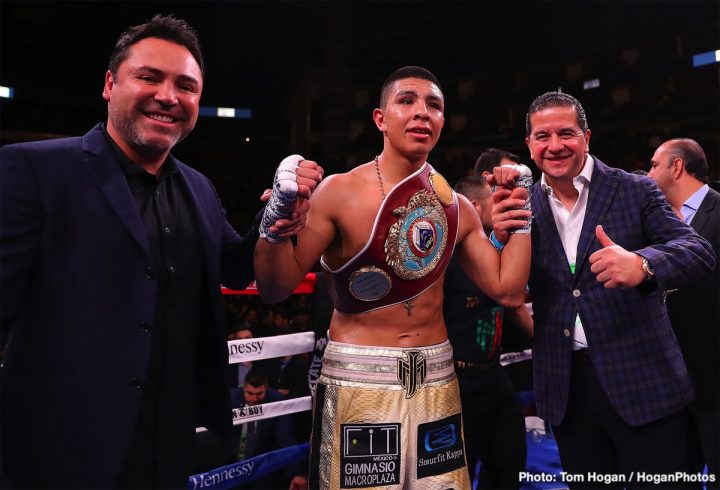 By Sean Jones: Jaime Munguia says he’s ready to face former middleweight champion Gennady Golovkin, and he sees it as a doable fight now that the two power punchers are both with DAZN. The hard hitting Munguia, 22, says he’d like to make the fight with GGG for his boxing fans, and he feels he’s now even more ready to fight the Kazakh than he was last year.

Munguia (32-0, 26 KOs) will be defending his WBO junior middleweight title against his mandatory challenger Dennis Hogan (28-1-1, 7 KOs) on April 13 on DAZN at the Arena Monterrey in Monterrey, Nuevo Leon, Mexico. It’s not a great fight, but the 154 lb division is one that has only a small limited number of talented fighters at this time. Once the the young 22-year-old Munguia moves up to 160, he’ll have access to a lot better fighters than the ones that permeate the 154 lb weight class.

“Yes, we would be interested in that fight with GGG now that he is on DAZN,” Munguia said about the Golovkin fight. “It would be a good fight for us and for the people. One year ago it couldn’t happen, but now obviously it’s a possibility, and if a year ago I felt ready, now I feel even more ready. So with pleasure we would accept the fight,” Munguia said.

Munguia will soon be moving up to middleweight to start fighting in that weight class. There’s more money for Munguia in fighting in the 160 lb weight class than a 154, but there’s more risk for him. It’s unclear whether Munguia has the talent, experience or enough boxing ability to mix it with the best middleweights in the division. The good news is that Munguia is young enough to hang around long enough for fighters like Golovkin, Saul Canelo Alvarez and Jermall Charlo to age and leave the game in the future. Unfortunately by the time that happens, there will likely be other young middleweight talents that emerge and will be ready to step into their place. Munguia is going to have to show that he has the talent to compete with the best at middleweight if he’s going to amount to anything once he moves up to 160 in the near future. Munguia is currently the WBO 154 lb champion. He a flawed champion in Sadam Ali by a fourth round knockout to win the World Boxing Organization junior middleweight title last year on May 12. It’s questionable whether Munguia could have beaten a more talented junior middleweight champion like Jarrett Hurd, Jermell Charlo or Erislandy Lara. Some boxing fans see Munguia as a ‘paper champion’ due to the guy that he beat [Sadam Ali] to become the WBO 154 lb belt holder, as well as the challengers [Brandon Cook, Takeshi Inoue and Liam Smith] that he’s defended his title against since winning the strap last year.

A year ago, Munguia was being considered as an opponent for IBF/WBA/WBC middleweight champion Golovkin’s title defense on May 5 on HBO PPV at the StubHub Center in Carson, California. However, the State Athletic Commission failed to sanction the Golovkin-Munguia fight due to Munguia never having fought at middleweight before, and lacking the experience to take on GGG. Vanes Martirosyan took the fight instead, and was knocked out by Golovkin in the second round. Golovkin was originally supposed to be facing Saul Canelo Alvarez in a rematch on the May 5 date, but the Mexican star tested positive for the performance enhancing substance clenbuterol, and he was subsequently given a suspension by the Nevada State Athletic Commission. Most boxing fans believe that Munguia would have been beaten by Golovkin, and possibly knocked out last year if the fight had been made between them.

“I have the mentality of going forward and always feeling that I will get my hand raised in victory, so I feel I would have won, but nobody really knows what would have happened,” Munguia said when asked if he thinks he would have beaten Golovkin last year if the two had fought. “Right now I’m focused on the fight that I have on April 13th, but after that with pleasure we would take this fight [with GGG].”

Golovkin likely won’t be the one that Munguia is matched up against when he moves up to middleweight. Munguia is co-promoted by Golden Boy Promotions, and they’re interested in matching him against Canelo Alvarez. Of course, it makes sense for Golden Boy to put Munguia in with the highly popular Golovkin as well, but only after he’s faced Canelo one or two times. It wouldn’t be surprising if Golden Boy waits until GGG gets a little older before matching Munguia against him. Right now, Golovkin, who is about to turn 37 next month on April 8, is still fighting at too high of a level for Golden Boy to put the inexperienced Munguia in with him. But things might change in a couple of more years when Golovkin is 39, and Munguia is in or near his prime at 24. GGG recently signed a six-fight, three-year deal with DAZN, which could take him to the end of his boxing career. You’d have to figure that if Golden Boy Promotions is going to match Munguia up against Golovkin in the future, it won’t happen until later on down the line when he’s at or near 39. It would be a similar to how many boxing fans believe that Golden Boy waited until Golovkin was 35 before letting Canelo fight him for the first time. The Canelo-Golovkin rematch could have taken place in December 2017, but Golden Boy instead had Golovkin wait a year before facing Canelo in the rematch. Some fans believe Golden Boy did this in order to age Golovkin more before letting Canelo fight him again, because most fans believe GGG deserved the win in the first fight against the Mexican star in September 2017. The first Canelo vs. Golovkin fight, which took place at the T-Mobile Arena in Las Vegas, was scored a controversial 12 round draw.

“There are plans. There are plans to have this fight, but first we have to go through this fight,” Munguia’s trainer Robert Alcazar said about a fight between Jaime and GGG. “It will be one of those future fights. Of course you would like to have the biggest fights out there, and if GGG is the next fight, then it’s the next fight. The decision is up to the promoter.”

Besides Golovkin and Canelo, Munguia will have the opportunity to fight other DAZN middleweights, Daniel Jacobs and Demetrius Andrade, once he moves up to the 160 lb weight class. There are at least four excellent fights that’ll be available to Munguia once he moves up in weight to middleweight in the near future.