Mikey Garcia: I’ll do whatever it takes to neutralize Errol Spence 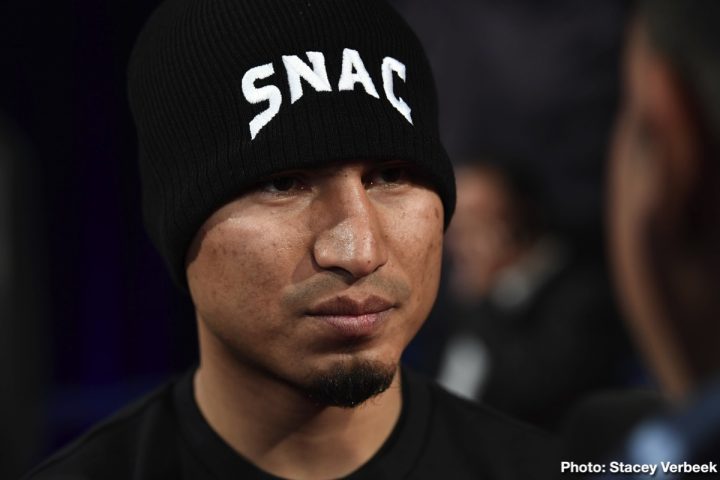 By Aragon Garcia: Multi-division world champion Mikey Garcia says he’s ready to do whatever it takes to neutralize Errol Spence’s offense to beat him this Saturday night on FOX Sports PPV at the AT&T Stadium in Arlington, Texas.

Garcia (39-0, 30 KOs) makes it clear that it takes more than size to win a fight, and his intention is to use his speed, both hand and foot, and his intelligence to get the better of IBF welterweight champion Spence (24-0, 21 KOs). This is the moment of truth for both of these fighters.

The winner moves on to bigger and better things in the division, while the loser will need to figure out what went wrong and will need to try put their career back in order. It’s going to be to be a lot tougher for Spence to come back from this loss than it will be for Mikey, because this is his division at welterweight. If Mikey loses, it’s no big deal since he can always go back down to 135 and resume defending his WBC lightweight title. A loss for Spence means that he wasn’t as good as people thought he was, and he would need to either move up to 154 or go after a guy with less than than him to win another belt.

This will be Mikey’s fifth division world title if he beats the 29-year-old Spence. It’ll also be Mikey’s third division world title that he’s won while fighting in Texas. Mikey beat Juan Manuel Lopez by a fourth round knockout in June 2013 to win the vacant world Boxing Organization featherweight title. Five years later, Mikey defeated IBF light welterweight champion Sergey Lipinets by a 12 round unanimous decision to capture the IBF 140 lb title. Mikey didn’t keep the IBF title for long, as he had other titles to go after in winning the IBF lightweight title last July in defeating IBF 135 lb champion Robert Easter Jr. by a 12 round unanimous decision.

“I’ll do whatever it takes to neutralize [Errol Spence,” Mikey Garcia said to Fighthype. “People see the size, and they see the weight, but there’s a lot more than that needed to win a fight. I got all the tools. I got the speed, and the reflexes, footwork and timing. You name it, I have it. I’m going to do whatever it takes to win,” Mikey said in discussing his fight with Spence.

Mikey didn’t say what he’s going to do to neutralize Spence’s offense, but movement is something he might try. Spence doesn’t move well at all. If Mikey can get Spence reaching, he can counter him like he did against Orlando Salido all night long in their fight in 2013. Spence has long arms, but he still won’t be able to get to Mikey if he uses movement, and a fast in and out style of fighting.

“I’m ready to go 12 rounds. I’m ready to put pressure. I’m ready to box,” Mikey said about his fight with Errol. “I’m ready to counter punch. I’m ready to do whatever it takes to win. I’ve already won two world titles here. I’m looking to win a third. My last opponent [Robert Easter Jr.] was taller, and had the reach, and I was able to win. I have all the skills needed to win this fight,” Mikey said.

The real challenge for Mikey, 31, is to see whether he can stop the body attack from Errol, because that’s his bread and butter in his offense. Spence is going to go on the attack from the outset, and look to take Mikey out with body shots in the same way he did against Carlos Ocampo, Lamont Peterson, Chris Algieri and Chris Van Heerden.

Mikey wants boxing fans to realize that to be the best in the sport, you don’t have to be bigger than your opponent. You just have to be smarter, and know how to fight. I helps that Mikey is both smart, and knows how to fight better than his opposition. But he also has one of the best trainers in all of boxing in Robert Garcia, who has picked apart Spence’s game, and knows exactly what Mikey needs to do for him to win the fight on Saturday. Robert says it easy for him to get Mikey ready for this fight because Spence’s fighting style is so “basic.” Spence doesn’t do anything flashy. He’s not fast, he doesn’t move a lot, stands right in front of you, and he doesn’t change stances. Robert Garcia says he had an easy time finding sparring partners that fight in the same simple manner as Spence. Robert isn’t trying to insult Spence by saying he’s basic. Robert says the same thing about Mikey with him being basic. Fighters that have a massive amount of power like George Foreman, Julian Jackson, Spence and Mikey were/are basic. There’s nothing wrong with being that way when you have the equalizer in terms of power.

“It’s not going to be an easy fight. It’s going to be a tough fight, but training-wise, it hasn’t been one of the toughest fights,” Robert Garcia said about the Spence vs. Mikey fight. “It wasn’t hard to find sparring partners that were basic [like Spence]. Errol Spence is basic. He’s very smart, very strong, very talented, but he’s not a flashy fighter. He’s not super fast. He doesn’t switch [stances]. He doesn’t move back and forth or side to side. He’s in front of you. Like Mikey said, Errol Spence is like him. They’re very basic. It wasn’t one of the hardest fights [to prepared Mikey for],” Robert Garcia said.

There you have it. Robert says Spence was super easy to get Mikey prepared for. Robert isn’t trying to insult Spence by saying he’s basic. He’s just telling it like it is. Spence isn’t someone that is going to outbox Mikey. If Spence wins, he’ll do it with his size and strength, which are the main things that he has going for him in this fight. Spence is good at crushing his smaller opponents, and he’s been doing that since he turned pro seven years ago. Spence hasn’t fought anyone that had the brains or the boxing knowledge that could negate his size and power advantage. As such, Spence has never had to use a Plan-B for him to win one of his fights. On Saturday night, Spence is going to need to have a Plan-B if he wants to beat Mikey. If he can’t come up with an alternative plan, then it could be over for Spence as the IBF 147 lb champion.