Mikey Garcia Begs to Differ; Many think the Oxnard native has bit off more than he can chew. He politely disagrees. 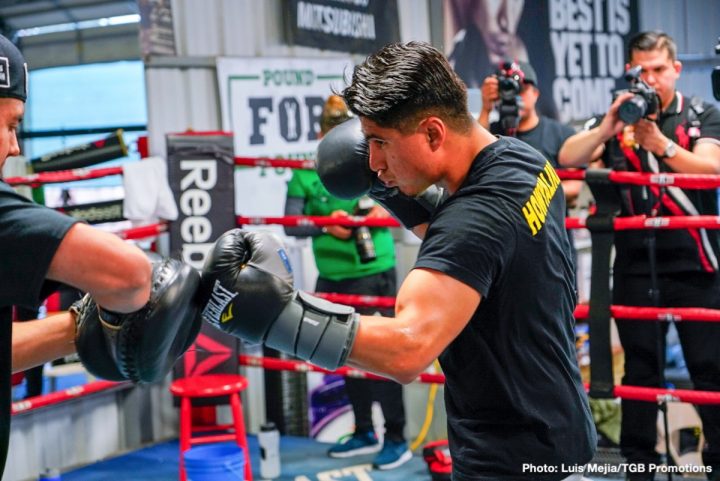 By Jason Hirthler: Sitting across from Mikey Garcia, it is easy to be impressed with how put-together he is. He shows up to his media appearances on-time, impeccably dressed, talking points rehearsed, and a magnanimous smile on his face. His is a picture of courtesy and accommodation. He patiently answers the same questions again and again, rarely betraying a hint of irritation. Given the gentlemanly charm of the man, one sometimes wonders if he is in the right sport. Aren’t boxers supposed to be brash, arrogant, and self-aggrandizing? Don’t they think of themselves in inflated terms that are typically at odds with reality? Often that is true. But Garcia is another kind of fighter. He understands the game outside the ropes as well as the game between them. And so, talking to Garcia before his 2018 bout with Robert Easter, Jr., you are a little surprised when he interrupts you mid-question as you ask, “If you win the fight on Saturday…” Before you can finish your sentence, the four-weight class champion breaks in and says, “Oh, I’ve already won the fight.” His face is an image of unbothered, unblinking certitude. Looking at him, you realize that, yes, he has already won the fight.

And he did, calmly dismantling Easter, carrying the Ohio native’s belt off into the Los Angeles night to cheers from a throng of Staples Center acolytes. But it is that occasional glimpse into the rock-hard, stone-cold mind of Mikey Garcia that gives pundits pause when they move to predict the highly anticipated March 16th matchup between Garcia (39-0, 30 KOs) vs. Errol Spence fight (24-0, 21 KOs) for Spence’s IBF welterweight title. Catch the bout on FOX PPV live at 9pm ET from AT&T Stadium in Arlington, Texas.

What Should Have Been

It’s a surprise this fight is even happening at all. And it wouldn’t have but for Mikey Garcia’s intense interest in making it. After all, the lightweight division is stacked, and includes Vasiliy Lomachenko, Richard Commey, Mikey himself, and the up-and-coming Teofimo Lopez. Many believe Garcia should be fighting Commey and Lomachenko, consolidating belts and attempting to comprehensively dominate the division like Robert Duran did for the entire decade of the Seventies. Instead, he has moved up 12 pounds to 147 to fight welterweight champ Spence, one of the most destructive punchers in the business. In the process, Garcia is taking on his first welterweight fight at age 31. By comparison, Duran fought Ray Leonard in his first major welterweight bout on the cusp of his 29th birthday in 1980, but only after having fought solid tune-up bouts in the division against Carlos Palomino and Zeferino Gonzalez. Spence is to Garcia what Leonard was to Duran, except that the fighting styles are slightly reversed: Garcia is the superior boxer and tactician while Spence is the power-shot fighter. Yet the Duran precedent exists. And it’s not the only one: then reigning welterweight champ Carmen Basilio moved up to middleweight in 1957 and dethroned Sugar Ray Robinson in a classic split-decision; Shane Mosley moved from lightweight to welterweight and defeated Oscar De La Hoya but, like Duran, prepared with a couple of tune-up fights at that new weight; and Manny Pacquiao, of course, has staged a litany of wins over larger men, including moves up to welterweight and super-welterweight to claim crowns against Miguel Cotto and Antonio Margarito, and his famous demolition of De La Hoya.

For his part, Errol Spence should be fighting WBO Welterweight Champion Terence Crawford, but Crawford is fighting another former lightweight in Amir Khan, last notably seen crumpling beneath the concrete right of Canelo Alvarez. Khan has since deposed Phil Lo Greco and Samuel Vargas, but no one expects him to test the indomitable Crawford. Which leaves Spence to take the Garcia fight, one that promises a great payday, but also a fight with little to no upside for the IBF champ. He is supposed to win. Anything shy of a short, brawling beat-down of the courageous Garcia will diminish his reputation and slightly dim his shooting star.

Spence has won universal acclaim for his stellar arsenal of whipping body blows and determined ring presence. His seminal triumph against Kell Brook, in which he displayed an almost implacable will to win, cemented his status as one of the best young fighters in the division. Brook, who fought well against Golovkin before submitting the GGG’s still-potent power, is a built man. That Spence ventured into his backyard, amidst the boisterous shouts of a rabidly English fanbase in Sheffield, England, and quite literally brought Brook to his knees, was a career-defining accomplishment. Odds are he’ll do the same to Garcia. Spence is a – 450 favorite, with Garcia coming in at +325. Pundits agree. A litany of experts, from fighters to trainers and analysts, have come forward to declare that Garcia has finally set his sights too high. When asked about the fight, Lomachenko shook his head with resignation, and picked Spence. Andre Ward gazed bewilderingly into the distance when asked how Mikey could beat Spence, before replying, “I’m going to defer to Robert Garcia on that one.” Mosley said, “Mikey fighting Spence is fearless but also probably stupidity.”

Garcia has long mastered the triple boxing tests of mind, body, and media. He handles the press with the grace of an elder statesman. He always adapts his ring strategies to the task at hand, borne atop a ballast of supreme confidence. And he consistently comes to fight night physically ready to go the distance, having worked through a full camp under the tutelage of his elder brother Robert. Max Kellerman described Garcia with a phrase he borrowed from the late great Emanuel Steward, saying Mikey is a “killer robot” who programs his plan and then methodically and dispassionately executes it. It’s a fitting tag for this consummate pro.

Yet what remains to be seen for the maestro from Oxnard, California, when he travels to Spence’s own backyard in Texas, is this: can his strength and speed and power translate to 147? Can he move up two weight classes and carry his punching power with him? Will his reflexes, reaction time, and ring spacing be slowed by the extra muscle? Or will he carry it naturally and bring it to bear against Spence? He’s moved divisions before with relative ease. But now he faces a man who many believe typically fights between 160 and 170 after rehydrating post-weigh in. Garcia is said to be planning to fight at 152 following a camp that saw him peak at 160. Still, this has to be a daunting prospect for the 5’6 Garcia, especially considering Spence also has a three-inch height and four-inch reach advantage. The last boxer Spence fought in Arlington didn’t survive the first round. Spence left relative unknown but unbeaten Mexican Carlos Ocampo grimacing on the canvas. Yet last year Mikey overcame a five-inch height and eight-inch reach advantage to floor and then decision Robert Easter, Jr. But that was at 135 against a veritable beanpole with only modest power. And that was in Garcia’s backyard in Los Angeles. Spence is a different animal who will likely use his strength to push Mikey onto the ropes and try to keep him there, while delivering hammer blows to Mikey’s midsection. Garcia will have to counter with quick footwork and strength of his own to avoid that fatal trap.

Of course, Mikey says all the right things. He always has. He is ‘daring to be great’. He believes, “People haven’t seen the best out of me.” At 31, that’s still a plausible claim, if by a slim margin. How many fighters peak in their thirties? But Garcia’s two-year layoff from the ring surely helps. It is not particularly encouraging for clean-boxing supporters that Garcia chose to train at SNAC in San Carlos, California, the training facility spawned by the infamous Victor Conte, the man behind baseball’s greatest steroid scandals. SNAC claims to harness, “clinical science to drive athletic performance.” Although it sponsors many outstanding fighters including Shawn Porter and Daniel Jacobs (and Andre Ward before them), it isn’t helpful that one of its stable, Willie Monroe, Jr., was recently booted from his title match with Jermall Charlo for testing positive for heightened testosterone levels. SNAC offers a variety of nutritional products with names like Xpedite(R) and Vitalyze(™). Maybe Conte is truly trying to play it straight, and Mikey believed his scientific nutrition could help him gain lean muscle efficiently. We shall see. And of course, the rumors have flown so often about Spence that there is a veritable cottage industry of skeptics dogging every step of the IBF welterweight champ’s professional life. To their credit, Garcia and Spence have enrolled in the VADA testing protocols with a fairly wide testing window, a necessity for any testing regime in modern sports.

As ever, Garcia doesn’t lack for brio. As he told Sporting News, that aside from strength, “I think I’m better than him in every other boxing category: timing, speed, footwork, reflexes, defense….It’s going to be historic. I know that’s what it’s going to be because I know what I’m capable of.” But almost all fighters believe their best is still in front of them. They envision bright horizons brimming with classic ring conquests. They have to, since confidence is an indispensable quality in the fight game. Which means they only come to see that their best is behind them when they learn that lesson inside the ropes. In any case, should Spence demolish Mikey, or should Garcia lose a closely contested fight, the current WBC and former IBF lightweight strap-holder will be handed kudos for his bravery and encouraged to climb down to lightweight for Loma and Commey, among others. However, should Garcia win, it would truly be a historic upset, derail one of the great evolving P4P careers in the sport, and put Mikey in the class he clearly craves to join: the pantheon of all-time warriors rather than generational greats. “If I don’t do this, I won’t be remembered,” the four-division champ recently declared. In any event, it will require a step change in the ring performance of the Garcia family’s greatest prodigy. He is a bigger underdog than he has ever been in his storied career. But it’s a position he relishes, even if the oddsmakers don’t.

Jason Hirthler is a writer and veteran of sports marketing. In recent years, he has led digital promotions of numerous boxing and mixed martial arts fights, including the landmark crossover bout between Floyd Mayweather and Conor McGregor. He lives and works in New York City.


« Gamboa vs. Cuellar, Rigondeaux vs. Ceja & Barthelemy vs. Easter Jr. being planned