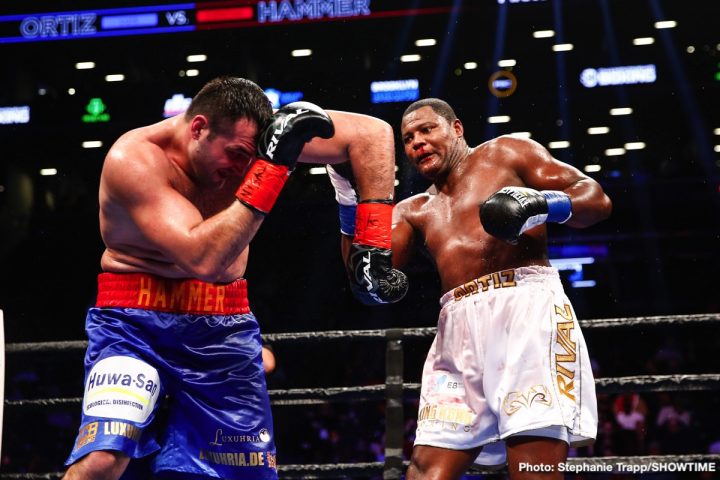 Ortiz (31-1, 26 KOs) freely admitted after the fight that it was a tougher match than he expected it to be against the unyielding 31-year-old Hammer (24-6, 14 KOs). The scores were wide in Ortiz’s favor with the judges scoring it 99-91, 100-90 and 99-91. The was closer than those would have you believe. Ortiz labored hard in every round of the fight in winning in a workman-like fashion against the heavier but not more powerful 257 pound Hammer. It was a game effort by Hammer, but he lacked the talent, power and the conditioning for him to take the fight to Ortiz. Hammer was resting much of the time, playing it safe and letting the older fighter Ortiz do all the work. Hammer didn’t show enough sense of urgency for him to have a chance of winning. With the ranking that Hammer had, he should have fought harder, because he needed a win tonight to stay in the running for a title shot against Joshua.

Ortiz still showed amazing ability tonight in the way that he fought. You don’t see the kind of combination of power and boxing skills that the 39-year-old Ortiz showed in this fight in beating Hammer. Ortiz wanted to knock Hammer out, but he couldn’t do it.

Hammer showed a steel chin with his ability to absorb the best left hand power hots that Ortiz could throw. This wasn’t about age though. Ortiz wouldn’t have knocked Hammer out five years ago either. This guy was simply going to go anywhere, and that’s a product of Hammer’s excellent punch resistance. Former WBA heavyweight champion Alexander Povetkin, one of the better knockout punchers in the division, was unable to hurt Hammer either in beating him by a 12 round decision in 2017.

“Every heavyweight out there should know that I still have it at 40,” the powerful Cuban talent Ortiz said after the fight. “Anthony Joshua, Deontay Wilder, I’m ready. I fought a fight that I hadn’t for years, which is box and work, so I’m not disappointed I didn’t knock him out. I showed some of my boxing skills tonight.”

Wilder (40-0-1, 39 KOs) isn’t going to fight Ortiz again, because he’s expected to take care of his World Boxing Council mandatory Dominic Breazeale next. Joshua (22-0, 21 KO) has a fight on June 1 against Jarrell ‘Big Baby’ Miller. There’s a chance Joshua will face Wilder later this year. That’s a match that Wilder could be open to if he accepts the offer by Joshua’s promoter Eddie Hearn, who wants to give him $15 million for a fight against Breazeale, and then that would lead to two consecutive fights against Joshua.

Ortiz’s win tonight was his third consecutive since his 10th round knockout loss to Wilder last year in March. In Ortiz’s two other fights since then, he’s beaten Razvan Cojanu and Travis Kauffman both by knockout.

There’s no question that Ortiz won the fight. He landed more shots, connected with the harder blows, hurt Hammer several times, and had the better connect percentage. However, Ortiz was always expected to win, and it was assumed by a lot of boxing fans that he would KO Hammer. The fact that Ortiz couldn’t get the job done in stopping Hammer has to be seen as a big negative for Ortiz, who would have gotten a lot of attention from the boxing fans if he’d been able to knock him out But it’s not easy to knockout a guy that is there to survive as Hammer was in fighting with his back against the ropes conserving energy and not want to put himself in harm’s way.

The southpaw Ortiz is one of the hardest punchers in the heavyweight division today, but he couldn’t knockout Hammer, who did a good job of guarding against the heavy shots from the Cuban fighter. Ortiz did n excellent job of going downstairs to land body shots to get Hammer to drop his guard so that he could go upstairs with head shots, but it didn’t work well enough. He wasn’t throwing enough punches to the body to consistently get Hammer to drop his guard. Ortiz did hurt Hammer with a body shot in the second round that almost dropped him. In the sixth, Ortiz hurt Hammer with a big left to the head. However, he failed to go after him to try and finish the job. Ortiz either didn’t realize that he’d hurt Hammer or he was too tired to try and knock him out. Whatever the reason, it was a missed opportunity on Ortiz’s part.

It might not matter that Ortiz didn’t shine the way he wanted/needed to for him to get the fight against Joshua. If Ortiz looked too good in the fight, he might have scared Joshua and his promoter Eddie Hearn away.

The victory for Ortiz ends a two-fight winning streak for Hammer, who came into the fight tonight with recent victories over Tornike Puritchamiashvili and Michael Wallisch since losing to Alexander Povetkin by a 12 round unanimous decision in December 2017.

The boxing ability and power was on Ortiz’s side tonight. Ortiz bloodied Hammer’s nose in the 5th round with a big shot to the head. However, Ortiz’s nose was bloodied as well by Hammer, who hit him with a looping right hand to the head that did the damage. Ortiz was wide open for Hammer’s right hand the entire fight. Ortiz never did a good job of being able to block those shots. Hammer hurt him in the fifth when Ortiz foolishly dropped his guard and invited Hammer forward. Hammer took advantage of that by tagging Ortiz with a right to the head that caused his legs to go to jelly. Hammer landed some good single shots from time to time in the fight, but he failed to put his punches together to try and ad to the ones he would land. It’s quite possible that Hammer didn’t want to take a risk of running out of gas if he had expended a lot of energy.

Hammer celebrated afterwards about not being knocked out by Ortiz, treating almost as if it was a moral victory. Hammer looked proud for having gone 10 rounds against a fighter that a lot of other heavyweights have no interest in facing.

“Ortiz is a very good and experienced fighter,” Hammer said. “He’s technical and smart, but he’s not as intimidating as people say he is. I respect Ortiz, but I don’t think he’s the best fighter I’ve ever faced. I’m very confident going forward. I know that I can go the distance with anyone and I’m willing to fight anyone. People thought I’d get knocked out, but I proved them wrong.”

Joshua and Wilder would likely give Hammer a good argument that he wouldn’t be able to go 12 rounds against them, but it’s unlikely that the German based fighter is ever going to get a chance to fight them. This loss tonight will drop Hammer in the rankings, and who knows long it’ll take for him to get back to where he he is now. Hammer took Ortiz’s best shots tonight, but what contributed to him being able to take the shots was he fought more like a sparring partner than someone trying to win. When you go in the sparring partner mode, a fighter can keep from knocked out by not taking chances.

Hammer is probably right about Ortiz not being the best fighter he’s faced. Hammer was knocked out in the eighth round by Tyson Fury in February 2015. Hammer lost to Alexander Povetkin two years later in December 2017. Those are likely the fighters that Hammer was talking about when saying he’s faced better guys than Ortiz. Povetkin couldn’t knock Hammer out either. Ortiz’s were just as wide except his fight was 10 rounds rather than the 12 rounds for the Povetkin fight.

Usyk to fight Takam or Povetkin next on May 18 »