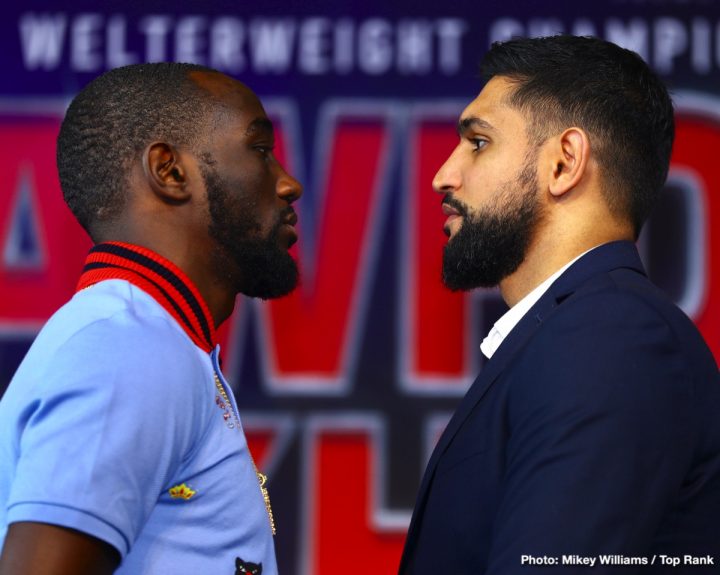 By Chris Williams: Amir Khan isn’t impressed with the resume of WBO welterweight champion Terence Crawford, and he firmly believes he’s going to hand him his first career defeat next month in their fight on April 20 at Madison Square Garden in New York. The two will be facing each on ESPN PPV next month in a fight that the boxing experts are picking Crawford to win.

Although Crawford (34-0, 25 KOs) is the favorite, there are a lot of boxing fans that are giving Khan, 32, a good shot at winning, mainly because Crawford hasn’t faced anyone good yet. Crawford’s promoters at Top Rank has been matching him against selectively in the same way they’re now doing with Tyson Fury by putting the heavyweight in with Tom Schwarz instead of the lion’s in the division.

Khan (33-4, 20 KOs) sees the same things a lot of boxing fans see when they look at Crawford’s resume, and that’s a a resume filled with weak, beatable opposition. When the best fighter on your resume is a passed his prime Yuriorkis Gamboa, it tells you that you’ve been matched carefully by your promoters. You’ve got to credit Top Rank for turning Crawford into a three division world champion without him suffering a loss, but it’s also shows you how watered down the divisions are with the numerous titles, and weak paper champions that permeate the weight classes.

“I think I’m the best fighter he’s faced,” Khan said to ESPN Deportes. “I’m going to expose him, he’s never faced someone as fast as I. I need the perfect fight, in one night, in one fight, I’ll get where I want. I want to be remembered as one of the best and this fight will give me that,” Khan said.

Whether intentional or not, Top Rank has failed to put Crawford in with the best in each weight division he’s been in. At light welterweight, Crawford never fought any of the lions like Regis Prograis, Ivan Baranchyk, Maurice Hooker, Jose Carlos Ramirez, Josh Taylor, or Kiryl Relikh. Those are the guys that Crawford should have fought to prove himself at 140, but none of those matches were made. These are the guys Crawford was matched against instead at 140: Julius Indongo, John Molina Jr., Thomas Dulorme, Viktor Postol, Felix Diaz, Dierry Jean and Henry Lundy. Those aren’t the talented fighters at light welterweight.

At best, Postol, who is clearly the most talented fighter Crawford fought while competing at 140, is no better than #7 in the division. Postol just lost to Josh Taylor, and he did a better job beating him than Crawford did. At welterweight, Crawford has only fought Jeff Horn and Jose Benavidez Jr. Those guys are arguably fringe level guys. Those guys would have to be seen as being rated below the following fighters: Errol Spence Jr., Keith Thurman, Shawn Porter, Danny Garcia, Manny Pacquiao, Yordenis Ugas, Jessie Vargas, Egidijus Kavaliauskas, Kerman Lejarraga, Adrien Broner, Amir Khan, and Josh Kelly. So in other words, Crawford has beaten two fringe contender level fighters in Horn and Benavidez since moving up to 147. It doesn’t mean anything that Crawford is the WBO welterweight champion. The guy that Crawford beat to win the WBO strap, Horn, beat Pacquiao by a controversial decision two years ago in Australia.

“I think I can win the fight,” Khan said. “A lot of people tell me that I do not have a chance, but I’m playing my legacy. I have to be very smart. I’m bigger, and I’ll be the fastest [he’s faced]. I have everything to win, and I’m at the peak of my career. Crawford, as a fighter, has everything, but I’ll be ready. If he wants to go to the front, if he wants to box, then I’ll be ready,” Khan said.

Khan points out that he’s undefeated at 147 since moving up to welterweight division in 2014. Khan is 5-0 at 147. Khan’s only defeat in the last five years came at middleweight against WBC champion Saul Canelo Alvarez in 2016. At welterweight, Khan has fought every fight he’s had. What you can fault Khan at is his inactivity, and the low level opposition he’s faced since moving up to 147. Khan’s opposition has been even worse than Crawford’s at welterweight.

Khan’s wins in the 147 lb division have come against these fighters: Samuel Vargas, Chris Algieri, Devon Alexander, Julio Diaz and Luis Collazo. There’s a good chance that Collazo would probably defeat Horn and Jose Benavidez if he fought those guys. The same with Alexander. Crawford should have fought better guys than that since moving up. Crawford is ranked #2 in Ring Magazine’s pound-for-pound list, but he’s been given that ranking for wins over weaker fringe level fighters in John Molina Jr., Felix Diaz, Indongo, Jeff Horn, Jose Benavidez Jr., Dierry Jean, Raymundo Betran and Hank Lundy. You kind of have to ignore Crawford’s pound-for-pound rating when you predict the outcome for the Crawford vs. Khan fight, because it’s misleading and it doesn’t tell you anything. It just means that Crawford has a lot of wins over guys that Khan and dozen or more other top fighters at 140 and 147 would beat.

Khan could have gotten a bigger payday fighting fellow countryman Kell Brook in a stadium fight on Sky Box Office pay-per-view, but he felt that he would gain more for his legacy in fighting highly ranked pound-for-pound fighter. Yeah, Khan probably will get more credit if he beats Crawford, but there’s also a chance the boxing public will discredit his win due to the weak opposition on Crawford’s resume.

The casual boxing fans look at Crawford’s resume, and think it’s impressive, but they don’t recognize that he’s faced mostly weaker competition. You can’t blame casual fans for not knowing when to spot a fighter that has been matched carefully by their promoters. Top Rank has done a good job of building Crawford’s resume by matching him against the right guys. They didn’t put Crawford in the World Boxing Super Series light welterweight tournament to compete with the likes of Regis Prograis, Josh Taylor, Ivan Baranchyk and Kiryl Relikh. Instead, they had Crawford move up to 147 to face Jeff Horn for the WBO welterweight title. All the time Crawford was at 140, he never fought the talented guys like the ones mentioned above. Crawford is now t 147, and he’s not being matched against the lions in that division either. As such, it’s hard to predict an outcome between Crawford and Khan, because it’s one fighter with an inflated resume [Crawford] facing a guy with a history of inactivity and chin problems in bad knockout losses to Canelo, Briedis Prescott, and Danny Garcia.


« William Hill Team Up With Lawrence Okolie And Joshua Buatsi