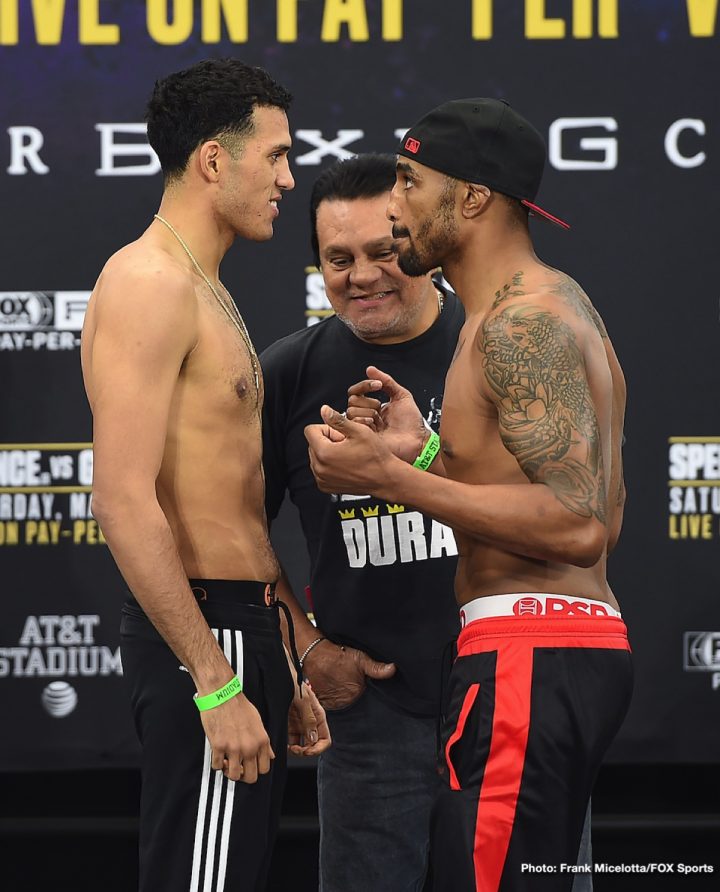 By Dan Ambrose: J’Leon Love (24-2-1, 13 KOs) danced in front of former WBC super middleweight champion David Benavidez (20-0, 17 KOs) during the face off at the weigh-in on Friday for their 10 round co-feature bout on Saturday night at AT&T Stadium in Arlington, Texas.

Benavidez and Love are the chief support on the Errol Spence Jr. vs. Mikey Garcia card. Benavidez-Love isn’t expected to be a competitive fight or last long for that matter. Benavidez needs an opponent to sharpen up his game after a long 13-month layoff, and Love is a guy that could give him some rounds possibly if he can withstand his likely early onslaught of heavy artillery.

Benavidez gave the 31-year-old Love menacing looks while he danced in front of him with his hands up in front of him. Boxing great Robert Duran, who was standing behind the two fighters during the face off, got into the act, dancing along with Love in front of an angry looking Benavidez.

Benavidez, 22, weighed in at 167 pounds at the weigh-in. Love came in at 168 1/4 lbs. Both guys looked in tip top shape. Benavidez looked a lot better for this fight than he did in his first fight against Ronald Gavril in September 2017. Benavidez, who is big for the super middleweight weight class, looked badly drained for the first fight with Gavril, and had dark circles under both eyes. Benavidez looked a lot better in their rematch last year in February, a fight in which Benavidez won easily by a 12 round unanimous decision.

This is the first fight back for Benavidez from a year-long long layoff after testing positive for cocaine last year. Benavidez was suspended for four months, and stripped of his World Boxing Council super middleweight. Now after the long break, Benavidez is getting back into the ring, and will be looking to make quick work of the Detroit, Michigan native when they face each other in the co-feature bout on the Errol Spence Jr. vs. Mikey Garcia card on Fox Sports PPV.

Love looked like he wasn’t making eye contact with Benavidez when he was dancing in front of him during the face off. At one point, a disgusted looking Benavidez turned away to face the crowd and pose. But when Love appeared to accidentally touch Benavidez with his left hand while dancing, Benavidez quickly turned around and gave him a mean look like he was ready to pounce on him. Love should be fighting at middleweight, not super middleweight. He doesn’t possess the size or the punching power to be fighting in the 168 lb division against lions like Benavidez, Gilberto Ramirez, Jessie Hart, Callum Smith or Caleb Plant. If Love moved down to middleweight, he might be able to get some interesting fights in that weight class if it didn’t take too much out of him cutting weight. Love might not like dehydrating, but he still would be better off fighting at 160 than he is right now being too small and weak to deal with guys like Benavidez. As we saw in Love’s third round knockout loss to Rogelio ‘Porky’ Medina in 2014, he’s just not a big enough puncher, and doesn’t possess the punch resistance to take the shots from the powerful super middleweights in the division.

Benavidez says he wants to “put Love to sleep” on Saturday night, and a make a statement. Benavidez wants to get a lot of attention in his fight, so he can start building a fan base. He’s been out of the ring for a year, and it prevented him from being involved in some big fights along the way. Benavidez should have entered the World Boxing Super Series tournament, because he could have fought the likes of Callum Smith, George Groves, Chris Eubank Jr., Juergen Braehmer and Rob Brant. That was a missed opportunity on Benavidez’s part. 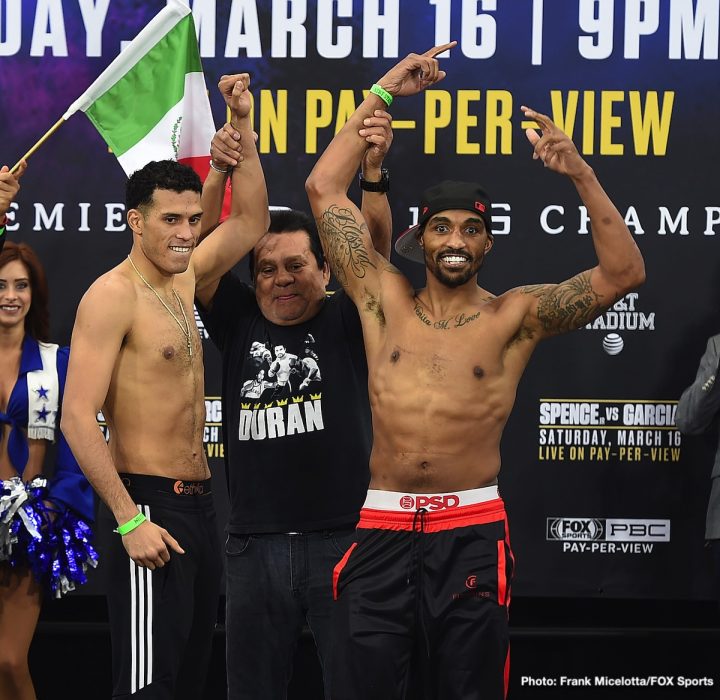 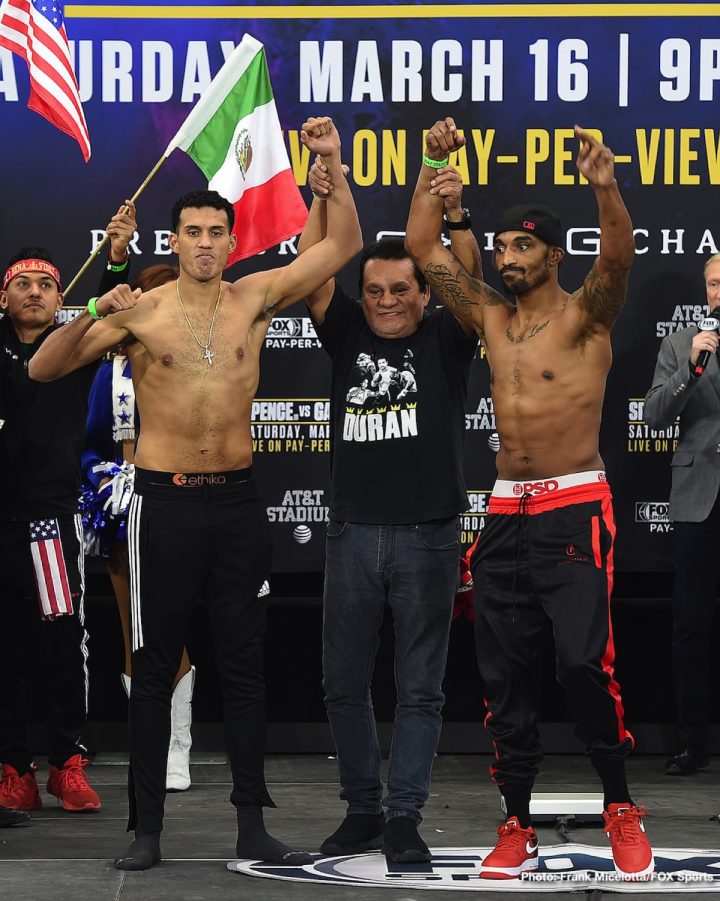 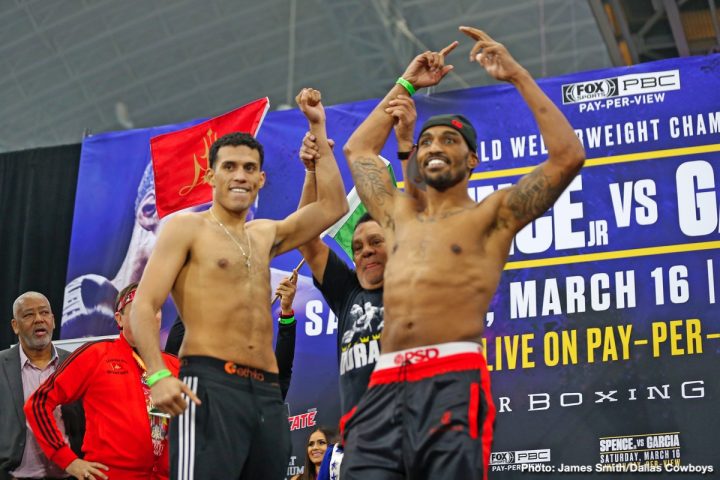