Finkel expects Wilder vs. Breazeale deal done by next week 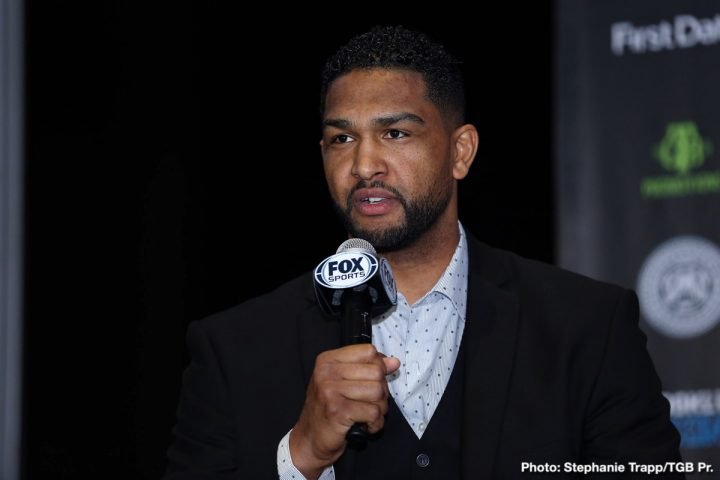 By Scott Gilfoid: With Tyson Fury dropping out of his planned rematch with WBC heavyweight champ Deontay ‘Bronze Bomber’ Wilder, the WBC has rescinded their previous order for the Dillian Whyte vs. Dominic Breazeale fight for the interim WBC title, and instead has ordered a Wilder-Breazeale contest to take care of the WBC mandatory that had previously been ordered. As such, Wilder vs. Breazeale will be taking place on May 18 at the Barclays Center in Brooklyn, New York.

Wilder’s co-manager Shelly Finkel believes the negotiations will be wrapped up quickly between Deontay and Breazeale (20-1, 18 KOs) well before the April 4 purse bid is due at the World Boxing Council’s headquarters in Mexico City, Mexico.

Wilder (40-0-1, 39 KOs) and Breazeale are both managed by Al Haymon of Premier Boxing Champions, which makes it simple for the negotiations to be completed quickly for this compelling fight, which is expected to be televised on SHOWTIME World Championship Boxing.

This could have been lineal champion Fury (27-0-1 19 KOs) that is fighting Wilder for his WBC title, but Tyson signed with Top Rank Boxing at ESPN, and he plans on fighting on that network for whoever they want him to fight. Fury is said to have signed a monstrous five-fight, $100 million deal with Top Tank, which some fans believe has taken away the hunger that he once had to face the best.

“We’re hoping to get it done. Hopefully, it will happen this week or next week and hopefully it’s done. At this point it’s not done,” Finkel said to ESPN.com. “But I think (Breazeale) is a competitive and viable opponent.”

Although Dillian Whyte’s fans are royally up in arms over the news of the WBC ordering the Wilder-Breazeale fight, the fact of the matter is the original plan by the sanctioning body was for Wilder to face his mandatory challenger Breazeale to satisfy his mandatory, which had been waiting since 2017. The WBC only chose to order the Whyte vs. Breazeale fight for their interim heavyweight title AFTER the Wilder vs. Fury 2 rematch was sanctioned because of the uproar over their previous fight last December. Once Fury chose not to fight Deontay next on May 18, then there was absolutely no reason for the Whyte vs. Breazeale fight to go ahead for the WBC interim title. It would have been a pointless fight. Why should Breazeale, the WBC mandatory, fight for the WBC interim title, when the champion Wilder has an open schedule for his next fight? It would have been pure lunacy for the WBC to still have Breazeale fighting Whyte for the interim strap once Fury chose not to fight Deontay again.

“WBC world heavyweight champion Deontay Wilder shall fulfill his mandatory obligations by fighting Dominic Breazeale next,” WBC president Mauricio Sulaiman said in a news release on Wednesday morning. “This order constitutes the start of the free negotiations period. If no agreement is reached between the camps, the WBC shall conduct a purse offer ceremony on April 4, 2019 at the WBC offices in Mexico City, Mexico.”

The chances of a purse bid for the Wilder vs. Breazeale fight are slim and none. Both guys being with PBC boss Al Haymon makes it extremely unlikely that a purse bid will take place. But even if it does, it’s no bid deal. The Wilder-Breazeale fight will get made, and the giant 6’7″ heavyweight talents will go at it on May 18 at the Barclays Center in Brooklyn.

Wilder vs. Breazeale will pit two U.S Olympians against each other. Wilder won a bronze medal in the 2008 Olympics for America, whereas, Breazeale fought in the 2012 Olympics for the U.S at super heavyweight.

This will be the second time Breazeale, 33, has fought for a heavyweight world title. He lost to IBF champion Anthony Joshua by a seventh round knockout in June 2016 at the O2 Arena in London, England. Breazeale gave it a good go, but he didn’t possess the fire power at the time to stand up to the younger, more powerful Joshua at the time of the fight. Breazeale has been working on his punching power since then, and he’s produced three consecutive stoppage wins over Izuagbe Ugonoh, Eric Molina and Carlos Negron. Breazeale fought well in each of the fights, showing a lot of punching power. Now that Breazeale has grown into his size, he’s sitting down on his shots a lot more than he was back when he fought Joshua in 2016. Dominic’s a completely different heavyweight now compared to back then.

As for Dillian Whyte, his promoter Eddie Hearn will have to find hims someone else to fight, because it’s not going to be Breazeale, as originally planned. Whyte had a chance to fight Joshua for his IBF/WBA/WBO titles recently, but he failed to accept the offer that was made to him. It might be best for Whyte to try and take the WBO mandatory route if he can. If the World Boxing Organization pushed Oleksander Usyk to their #1 spot in the heavyweight rankings, there won’t be anything that Whyte can do about it other than wait for the smoke to clear from a Joshua vs. Whyte fight. It’s unlikely that Whyte would want to scrap with Usyk to earn a title shot against Joshua. That could go all wrong for Whyte if he gets out-boxed by the crafty Usyk, who is looking out of this world good right now. Whyte can can wait his turn, and eventually get his shot against Joshua. If Whyte signs with Top Rank Boxing on ESPN, he can potentially fight Tyson Fury at some point, as the American promotional company likes to do a lot of in house fights. Whyte might get lucky and get two or three fights with Fury, depending on how many of the matches they want to put together. That could be a good thing or a bad thing for Whyte. If Fury out-boxed Whyte like he did in his two wins over Dereck Chisora in the past, Dillian could see his once promising career implode to the point of no return. As such, signing with Top Rank could be a disastrous move on Whyte’s part if it means he’ll be facing Fury two to four times.