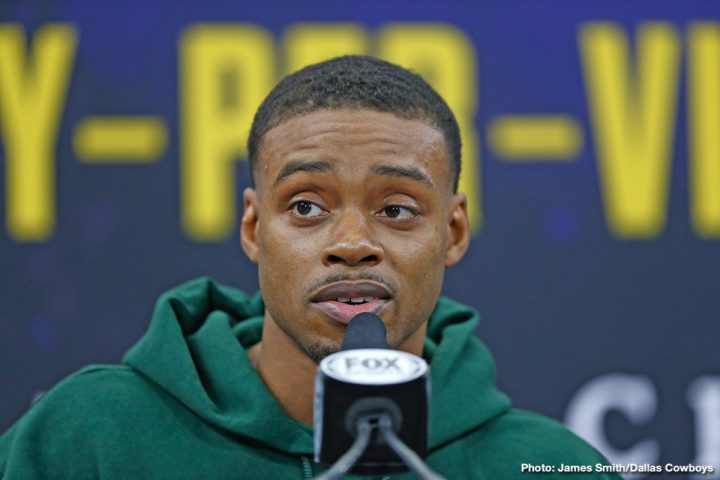 By Mike Smith: WBC welterweight champion Shawn Porter “took the easy way out” instead of fighting a unification match against IBF champion Errol ‘The Truth’ Spence; at least that’s the way Spence sees it.

Spence says he wanted to fight Porter (30-2-1, 17 KOs), but Porter chose instead to defend against former Cuban amateur star Yordenis Ugas (23-4, 11 KOs) last Saturday night on March 9, and he barely defeated him by a controversial 12 round split decision at the Dignity Health Sports Park, in Carson, California.

Porter, 31, says he’s going to enter the ring after the Spence vs. Garcia fight this Saturday night to challenge the winner. Spence’s popularity will be sky high after he destroys Mikey. Whoever ends up as Spence’s next opponent will have a great deal of attention on them. Porter is obviously hoping to take advantage of that. Whether Spence will give Porter the time of day is unclear.

With the taint that is following Porter from his controversial win over Yordenis Ugas, Spence would be better of steering clear of him, and focusing on guys that aren’t being followed by a dark cloud from a controversial win. Spence would do better to ignore Porter, and focus instead on challenging Keith ‘One Time’ Thurman, Manny Pacquiao or Terence Crawford. Thurman or Pacquiao would be the better options for Spence to fight than Porter.

It would be smart for Spence and his management to make sure that Porter isn’t allowed into the ring on Saturday night, because if he’s able to get inside the ring to call him out, there’s going to be pressure for him to take that fight rather than one against the arguably more popular Pacquiao or Thurman. Spence can’t gain much fighting Porter with him coming off a controversial decision win over Ugas.

The fighter that Porter should be facing next is Ugas. He should give him a rematch so that he can prove to the boxing public that he’s the better fighter. Right now, a lot of fans feel that Porter was given a win he didn’t deserve. Spence would be hurting himself by agreeing to fight Porter right now. Even if Porter had looked good in beating Ugas, he’s still not a good opponent to face in comparison to Pacquiao or Thurman. Those guys are more popular, and either of them would be ideal for Spence to fight following his win over Mikey.

Porter got the nod by the scores 116-112, 115-113 for Porter, and 117-111 for Ugas. It was a bad performance by Porter. The game plan looked like it was put together on the fly without much thought behind it, and Porter’s execution was equally poor. Porter looked like an old fighter, and not an elite one. That was Porter at his worst.