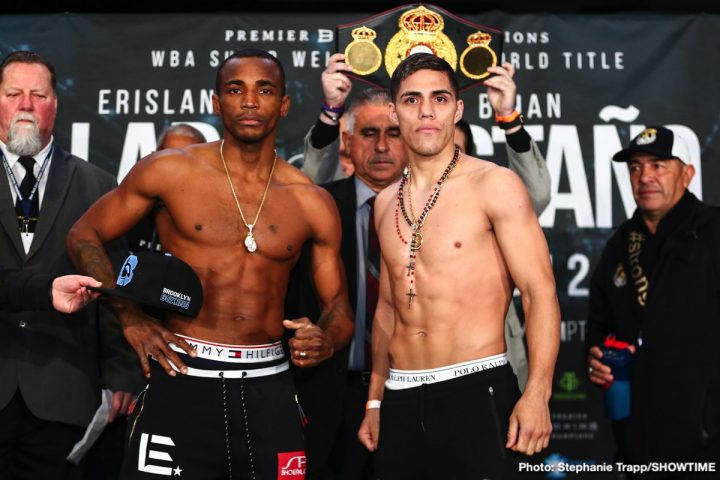 Castano has only one gear to his game, and that’s high gear. He’s going to jump on the soon to be 36-year-old Lara from the moment the bell rings in the first round, and force him to fight at a pace that he’s not accustomed to fighting. Lara prefers to fight at a slow, measured pace for his fights, because that allows him counter and take plenty of rest breaks. Castano is the opposite. He’s a fighter that likes to go at full speed, forcing his opponents to live with him at at pace that requires superb stamina.

Castano beats guys with his aerobic ability. There hasn’t been anyone yet that can match Castano for his conditioning. A huge puncher like Jarrett Hurd, Jaime Munguia or Jermell Charlo are guys that would give Castano problems with their power, but someone like Lara, who doesn’t have that kind of punching power, is going to be forced into fighting a fast pace for 12 rounds for him to have a chance of winning.

There was a time when a fight between Lara and Castano would have been an easy one to predict an outcome for, but not anymore. Lara, 35, has lost a step, and he’s coming off of a defeat to Jarrett Hurd last April.

“I worked so hard for this fight because I know how much is at stake,” Castano said. “I’ve been looking for this fight, even before Lara lost to Hurd. Luckily everything came together for me to fight Lara on Saturday.”

Lara has not been fighting lately, and he didn’t look great in losing his last match against the 6’1″ Hurd. Castano is not as much a risky fight for Lara as Hurd was, but it’s a bad style match-up for him due to the high punch output and fast hands that the Argentinean fighter is known for.

Castano was a standout amateur from Argentina, who has looked very good since turning pro seven years ago in 2012. Castano’s promoters unfortunately have been slow in pushing him against better fighters in the 154 lb division. Had Castano been with different management, he likely would have captured a world title years ago, and been involved with a lot of big fights already. Instead, Castano has been languishing, competing in Argentina against low level competition most of his career until recently when he traveled to France to defeat Michel Soro and Cedric Vitu in back to back fights. Castano could have done a lot better if he would have been fighting in the U.S against Jarrett Hurd, Jermell Charlo, Tony Harrison, Julian ‘J-Rock’ Williams, Jaime Munguia, Kell Brook, Austin Trout, Erickson Lubin, Maciej Sulecki, Carlos Adames, Sergio Garcia and Jeff Horn. As the saying goes, better late than never. Castano is still young at 29, and he’s more than ready to take on the lions in the 154 lb division, provided that he can past Lara tonight in what should be a very interesting contest from start to finish.

This is a make or break fight for Lara, who really needs a win right now to get back to where he was in his career. Lara held the WBA 154 lb title from 2014 to 2018. Lara was a disappointing champion, who chose to mostly milk his World Boxing Association junior middleweight title against Ishe Smith, Vanes Martirosyan, Yuri Foreman, Delvin Rodriguez, Jan Zaveck and Terrell Gausha. A lot of those fighters didn’t deserve to be fighting for a world title, and it clear that they were picked out due to them being a non-threat to Lara. If Lara is able to beat Castano tonight, it’s easy to predict that he’ll go back to making soft title defenses against weak opposition to milk his WBA ‘regular’ 154 lb title.

Can Erislandy Lara keep up with the fast pace from Castano?

Lara might have a little more power on his shots than Castano, but he can’t match the Argentinian for hand speed or work rate. Castano is MUCH faster, and he he never stops throwing punches. Castano is like a bigger version of the late great former IBF/WBA light welterweight champion Aaron ‘Hawk’ Pryor (39-1, 25 KOs), a fighter that was known for his ability to throw continuous punches an entire 12 round fight. Pryor wasn’t the hugest puncher, but he made up for it by his ability to throw nonstop punches. Castano is the same type of guy, and that makes him a nightmare for the fighters like Lara, who is more of single punch type of a fighter. Lara increased his punch output for his last fight against Jarrett Hurd last April, but he was still outworked by him. Hurd landed 217 of 824 punches for a 26% connect rate, according to CompuBox. Lara landed 176 of his 572 shots for a 31% connect rate. Down the stretch is where the fight was lost by Lara, as Hurd upped the tempo considerably in the championship rounds in 9 through 12. Hurd waited until the later rounds to start throwing massive amount of shots, and that enabled Lara to build a lead over him. Tonight it could be far different. Castano isn’t going to wait until the last three rounds to start putting heat on Lara. He’s going to do it from the very start, and force him to boil over on the side of the road like an old car if he can’t keep up with his fast pace.

“I am a crowd-pleasing fighter. I’m going to be aggressive,” Castano said. “That’s just my style. But I can also adapt to my opponent. You have to do different things to win a fight of this caliber.”

If anything, it’s going to be Lara that is going to have to adapt to Castano. If Castano fights Lara’s fight, he’s going to be slowing his game down, and giving the aging Cuban his only chance of winning the fight.

Lara is going to be sneaky and try to win rounds based on his counter punching, but that’s not going to be enough for him to get the job done against a smart fighter with the kind engine that Castano possesses. Castano’s training team has already dissected Lara’s past fights, and noted that he didn’t do well against Hurd when he turned up the heat on him in the final four rounds. Castano is going to push a pace that Lara is uncomfortable with, and can’t sustain. Ultimately, Castano will be too much for Lara, and he’ll win this fight going away in defeating him by a lopsided 12 round unanimous decision. Lara will make it exciting as always, but he won’t have enough in the tank to get the job done. This writer sees Castano winning by a 116-112 score over Lara. You can’t rule out a knockout if Castano goes to the body, as Lara hates getting hit to the body. Canelo beat Lara with body shots, and Carlos Molina and Alfredo Angulo gave him problems when hitting him in the midsection as well.

The co-feature bout will see Cuban heavyweight knockout artist Luis Ortiz (30-1, 26 KOs) looking for a highlight reel knockout against Christian Hammer (24-5, 14 KOs) in a fight that is scheduled for 10 rounds. There are no titles on the line, and this isn’t an eliminator, unfortunately for the two heavyweights.

In the first fight of the televised SHOWTIME card tonight,
featherweight Bryan De Gracia (24-1-1, 20 KOs) will be fighting Eduardo Ramirez (21-1-3, 8 KOs) in a 12 round fight that promises to be action packed from start to finish. This fight has a good chance of stealing the show with two superb fighters ready to go at it for 12 rounds.

« Deontay Wilder wants Joshua rather than Fury fight after Breazeale