Dillian Whyte to fight on July 13 in London 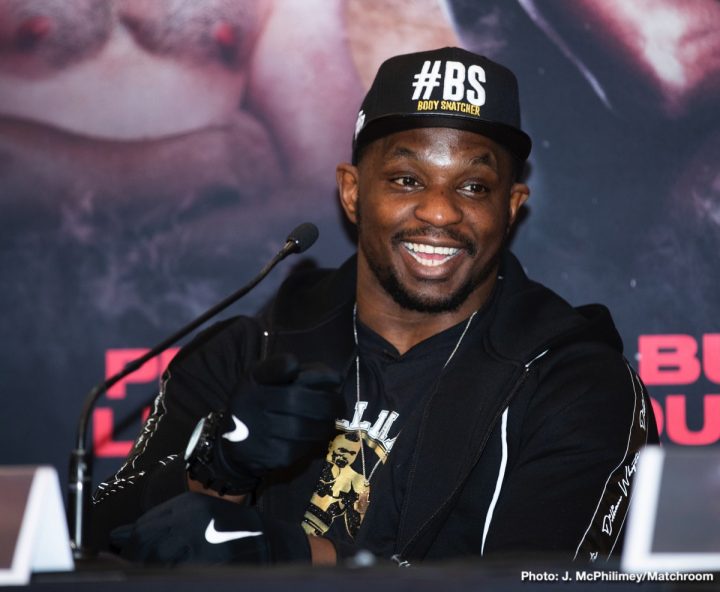 By Scott Gilfoid: Heavyweight contender Dillian Whyte will be returning to the ring on July 13 in London, UK to face a still to be determined opponent, according to his promoter Eddie Hearn. WBC mandatory challenger Dominic Breazeale is the desired opponent for Whyte (25-1, 18 KOs) to be facing on 13th of July date, but that will depend on whether WBC heavyweight Deontay Wilder chooses to face Dominic next or not in his May 18 fight.

Wilder (40-0-1, 39 KOs) wants to gets his WBC mandatory out of the way by fighting Breazeale (20-1, 18 KOs) next. However, Hearn says he’s going to speak to the World Boxing Council to have them confirm that their previously ordered Whyte vs. Breazeale fight be for the WBC mandatory, as well as the interim title. As such, Hearn wants the Wilder vs. Breazeale to be ruled as voluntary defense for Deontay, and not him taking care of a mandatory.

Dillian will be fighting on July 13th. That’s the date we’re penciling in right now for London,” Hearn said. “Hopefully it’s against Breazeale. That’s the fight where he wanted to go. If he [Wilder fights Breazeale] does, we’re saying Dillian Whyte should be the mandatory, and then he can have a fight on July 13th, and then wait for the winner of Wilder vs. Breazeale,” Hearn said.

It would be surprising if the World Boxing Council sides with Hearn by saying that Wilder’s fight with Breazeale is just a voluntary defense for him, and not him taking his mandatory. Breazeale, 33, has been Wilder’s mandatory for two years since 2017, and the WBC has chosen, for whatever reason, not to order the fight. The WBC recently decided to order Breazeale to face Whyte for their interim WBC heavyweight title due to Wilder being potentially tied up in defending against Tyson Fury in a rematch that was supposed to have been taking place on May 18. But now that the Wilder-Fury 2 fight WON’T be taking place on May 18 due to Fury signing with Top Rank Boxing, and them choosing to have him take an interim fight, it frees Wilder up to take care of his mandatory challenger Breazeale on the May 18 date. In other words, there’s no reason for Breazeale to face Whyte any longer, because isn’t fighting Fury, and he’s available to make his defense rather than fight for the interim WBC strap.

The whole reason the WBC ordered the Whyte vs. Breazeale fight was because Wilder was busy with the Fury rematch. Now that he’s not busy, then there’s no longer need for the Whyte-Breazeale fight to take place for the interim WBC strap. The fight is no longer necessary. Hearn will still likely persuade the WBC president Mauricio Sulaiman to make the Wilder vs. Breazeale fight a voluntary defense of Deontay’s WBC title, but it’s unlikely that’s going to happen, because the whole reason the sanctioning body ordered Breazeale to face Whyte in the first place was because of the Wilder-Fury II rematch taking place on May 18.

“Yeah, he’s not looking for a tick over,” Hearn said about Dillian Whyte’s July 13th fight not being an easy mark. “He’s not going to fight Tom Little on a pay-per-view show.,” Hearn said.

Hearn says Whyte’ July 13 fight will on Sky Box Office pay-per-view, which means it’ll be necessary for him to find a quality opponent for him to face. Hearn can’t cart in journeyman Dereck Chisora again for a third time to face Dillian, because that tired retread has been played out already. Hearn needs to bring in some new blood for Dillian to fight, and he’s not likely going to be able to bring in Luis ‘King Kong’ Ortiz, not that he would ever seriously consider having him as the option for the July 13 date. Having Chisora facing Joseph Parker on Whyte’s undercard on July 13 will help justify having it televised on Sky Box Office rather on regular Sky, which you can argue is where it should be if Hearn has Dillian fighting another over-matched guy like we’ve seen from him in fights against Lucas ‘Big Daddy’ Browne and Robert Helenius.

There aren’t a lot of options for Hearn to choose from for Whyte’s opponent on July 13. Since the fight is on Sky Box Office, it’s got to be someone that won’t cause the British boxing fans to turn up their noses at paying to see Dillian. It’s obviously hard enough paying to see him fight guys that they know he can beat, but to take on someone that zero chance of beating him, it’s off putting. It doesn’t matter that Chisora (29-9, 21 KOs) is fighting Parker on the undercard. Chisora has lost 2 out of his 4 fights, an Parker (25-2, 19 KOs) has been beaten in 2 out of his last 3. It’s a race to the bottom for these two heavyweight, and it’s hard to imagine boxing fans being eager to pay to see them fight. That’s why it’s important that Hearn find a live body for Whyte to fight in the main event on July 13. It can’t be another Big Daddy Browne, Robert Helenius, Malcolm Tann or Ivica Bacurin level heavyweight for Whyte to fight if Hearn wants to bring in the PPV buys on Sky Box Office. Unfortunately it’s going to probably one of these guys that Whyte will be facing in July:

It might not even be a heavyweight at this level that Whyte faces on July 13, because why would they want to risk their top 10 ranking by fighting him? Unless Hearn is going to through a bucket of money to get one of them to fight Dillian, it’s likely he’s going to be facing someone even below these guys, which is going to be a major disappointing because his next fight is on Sky Box Office.

“I want to make the Parker fight for the undercard of Dillian on July 13th,” Hearn said to IFL TV about Chisora facing Parker on the Whyte undercard on July 13 in London. “So, Dereck will come out in a 10 round fight on April 20, and then hopefully win, and then come out an fight Joseph Parker on July 13th.”

The April 20th card is going to be headlined by Lucas ‘Big Daddy’ Browne vs. Dave Allen, which is horrible fight in Gilfoid’s opinion. It’s a decent undercard fight, but it’s not a main event level fight. Browne (28-1, 24 KOs) is coming off of a controversial six round 57-56 points win over journeyman Kamil Sokolowski (6-15-2, 3 KOs) last Saturday night at the Trump Turnberry, in Turnberry, Scotland. Browne, 39, was knocked down in the second round by the 32-year-old Sokolowski, and beaten to the punch the entire six-round fight. Browne came close to winning none of the rounds. This writer had Sokolowski winning all six rounds of the fight. Each time Browne would lurch forward to throw one of his wild right hands from the outside, Sokolowski would catch him with a left hook to the head that send him backwards. Browne looked like a clueless amateur in the fight with the way he was throwing uppercuts from the outside and getting continually caught with left hooks from Sokolowski. If you look at social media, most boxing fans saw Browne losing badly to Sokolowski last night. The casual boxing fans will likely not be aware of Browne’s controversial win over Sokolowski, so they might be interested in seeing him fight Allen. It’s still arguably a poor fight for a main event. It’s more like a fight that one would see in the match on a card or even an off TV type fight.

“The WBC ordered [Dominic] Breazeale against [Dillian] Whyte before they ordered Fury against Wilder. So, the winner of that [Breazeale vs. Whyte] is the mandatory to fight Wilder,” Hearn said in discussing the WBC mandatory situation. “Now if Wilder fights Breazeale, which looks very likely, then they will try to make it the WBC] mandatory fight. That’s what we’re saying [how can they do that?]. Wilder will try and say, ‘I’m getting my mandatory out of the way.’ No, that mandatory was ordered to be contested between Breazeale and Dillian. So my argument to the WBC is no, no, no. We can’t stop Wilder from fighting Breazeale, but that’s a voluntary defense, and Dillian is the straight mandatory. That’s how it should be in my opinion. So that’s what we’re hoping for, and we’ll see what we get to,” Hearn said.

As you can see, Hearn is going to try his best to keep the Wilder vs. Breazeale fight satisfying Deontay’s WBC mandatory defense. Hearn is trying to force Whyte on the winner of the Wilder vs. Breazeale fight. It doesn’t make sense at all for Hearn to do this, unless he’s trying to force Wilder to take the Joshua fight. Hearn doesn’t need to do that, because Wilder is now saying that he’s given up the Tyson Fury fight now that he’s signed with Top Rank Boxing, and wants to let their rematch marinate. Wilder says he wants to fight Joshua after his May 18 fight, so it’s not necessary for Hearn to push Whyte onto him. The only reason it would make sense for Hearn to be insisting that Wilder fight Whyte is if he’s worried about Deontay beating Joshua. If the idea is for Whyte to take care of Joshua’s problem with Wilder, then yeah, it makes sense for Hearn to want Whyte to fight Deontay after he defends his WBC belt against Breazeale on May 18.


« Usyk to fight Takam or Povetkin next on May 18

Daniel Jacobs: ‘The judges will have pressure on them’ »