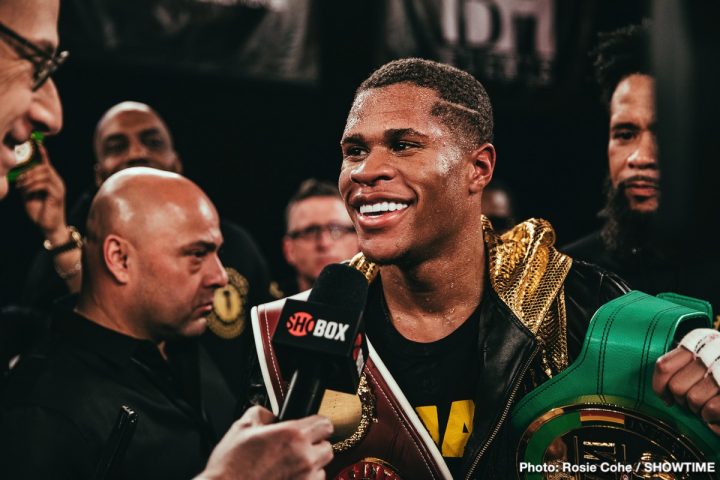 By Jim Dower: Unbeaten lightweight contender Devin Haney (21-0 13 KO) met with Matchroom Boxing USA/DAZN promoter Eddie Hearn on Friday to discuss a promotional deal with the company. There’s no word yet whether Hearn will be able to sign the young 20-year-old Haney, but if he does add him to his growing promotional company, he would be adding a very talented fighter that could make waves in boxing in the future.

Haney, #4 WBC, is in position to potentially fight for the WBC lightweight title against Luke Campbell if WBC champion Mikey Garcia chooses to vacate his title after he faces IBF welterweight champion Errol Spence Jr. on Saturday night in their fight on Fox Sports PPV at the AT&T Stadium in Arlington, Texas.

It’s still too early to know whether Haney’s meeting with Matchroom boss Eddie Hearn will result in him signing with his company. With the big contract that former heavyweight world champion Tyson Fury recently was given in with Top Rank Boxing, it might be in Haney’s best interest to continue to shop around to see if he can get a better deal elsewhere.

It’s unclear whether Haney is popular enough to go straight to DAZN to negotiate with Executive chairman John Skipper the way that former middleweight champion Gennady Golovkin and Golden Boy Promotions superstar Saul Canelo Alvarez both did. Haney might be able to get a big deal with DAZN if he meets with them.

Since turning pro four years ago in 2015, Haney has steadily improved his game, and is now looking like a cant’t miss future world champion. He has wins over Juan Carlos Burgos, Mason Menard in addition to his recent victory over Ndongeni.

Hearn has surprised a lot of American boxing fans with the impact he’s made with his promotional company Matchroom USA. When Hearn first made it clear last year that he was going to look to make some noise in promoting fights in the U.S, he wasn’t taken seriously by a lot of fans. But he’s quickly shown that he’s a serious promoter, and his goal is to sign as many top fighters as possible for them to fight on DAZN platform. They already have Canelo, Golovkin, Daniel Jacobs, Demetrius Andrade and Oleksander Usyk. WBC heavyweight champion Deontay Wilder recently met with DAZN and was reportedly given a big offer, which he is said to have rejected. Haney signing with Matchroom would be another future start heading towards DAZN. As the saying goes, ‘the rich get richer.’