David Lemieux vs. John Ryder added to Canelo-Jacobs card on May 4 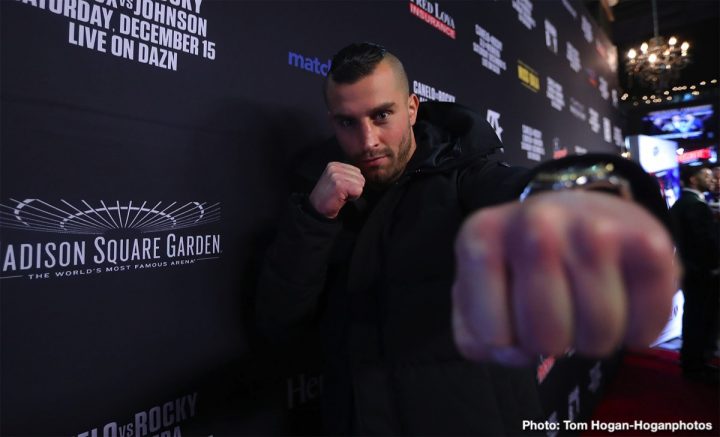 By Dan Ambrose: David Lemieux vs. John Ryder has been added to the May 4 DAZN card headlined by Saul Canelo Alvarez vs. Daniel Jacobs at the T-Mobile Arena in Las Vegas, Nevada. Lemieux-Ryder will take place at super middleweight. The winner of the fight will be the mandatory challenger to WBA Super World super middleweight champion Callum Smith.

Ryder, 30, is already the mandatory for Callum Smith, but he apparently is willing to take the risk of losing that spot by facing the big punching former IBF 160 lb champion Lemieux in order to get some high visibility fighting on the Canelo-Jacobs card.

#1 WBA Ryder (27-4, 15 KOs) is an excellent fighter with wins over Jamie Cox, Patrick Nielsen and Andrey Sirotkin. However, Ryder’s aggressive come forward slugging style of exactly the type of style that Lemieux likes. Ryder is going to be there to be hit by #5 WBA & #5 WBC Lemieux, who will be fighting in a weight class where he won’t need to struggle to make weigh-in limit. Lemieux, 5’9 1/2″, has been struggling to make weight for his fights at middleweight for the last couple of years. The effort that Lemieux (40-4, 34 KOs) has put in to lose weight has sometimes caused him miss weight, cancel fights and put in look bad. But when he’s gotten his weight right, he’s been devastating in knocking out the likes of Curtis Stevens, Gabriel Rosado, Gary O’Sullivan and Fernando Guerrero.

Ryder has come up short when he’s stepped it up against Rocky Fielding, Jack Arnfield, Billy Joe Saunders and Nick Blackwell. Lemieux is clearly a cut above those types of fighters. Ryder’s punch resistance might help him in this fight. He has been knocked out once in his career in losing to Blackwell by a seventh round TKO in 2015. But that loss was more of a case of Ryder struggling with the high work rate from Blackwell. Ryder won’t have to worry so much about the boxing ability of Lemieux or his high work rate, but rather the sheer punching power. If Ryder can’t get out of the way of Lemieux’s huge shots, he’s going to need to count on his chin being able to withstand his blasts for 10 to 12 rounds. Can Ryder do that? That’s the major question. Lemieux won’t be weight drained for this fight, so he’s going to be punching with massive power from start to finish.

Both fighters have lost to Billy Joe Saunders in the past. A weight drained Lemieux was soundly beaten by Saunders by a one-sided 12 round unanimous decision in December 2017. Ryder lost a close 12 round unanimous decision to Saunders in 2015. The fact that Ryder did a better job in losing to Saunders than Lemieux did doesn’t necessarily mean he’s going to beat him. Ryder was more comfortable with Saunders’ slick fighting style than Lemieux, and he wasn’t weight drained for the fight. Lemieux arguably should have moved up to super middleweight three years ago after his eighth round stoppage loss to Gennady Golovkin in 2016. That fight was a clear sign that Lemieux needed to move up to 168. Instead of doing that, Lemieux stuck it out at middleweight for the next two years, and had mixed results in beating six of his last seven fights, but losing in an embarrassing fashion to Saunders in 2017. Lemieux’s wins in the last two years have come against Cristian Fabian Rios, Gary ‘Spike’ O’Sullivan, Karim Achour, Marcos Reyes, and Glen Tapia.

Lemieux hasn’t fought too many southpaws during his 12 year pro career, so it’s going to be interesting to see how well he adapts to the left-handed stance of Ryder. It might not matter. If Lemieux is punching with full power in this fight, Ryder isn’t going to last long once he starts getting hit flush.