Beterbiev vs. Kalajdzic & Ancajas vs. Funai set for May 4 on ESPN 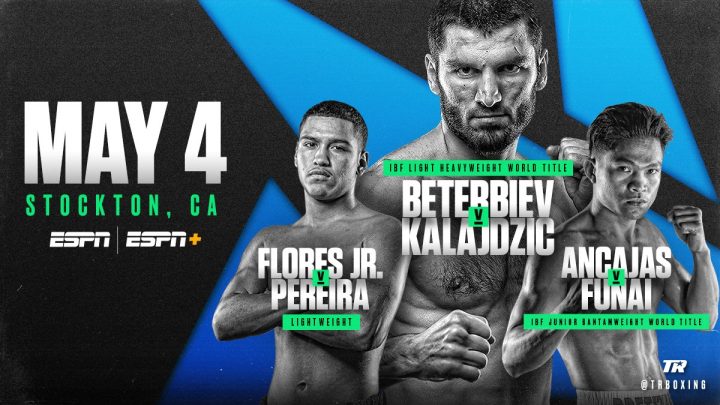 By Jim Dower: Light heavyweight world champion Artur Beterbiev will be defending against Radivoje “Hot Rod” Kalajdzic in the headliner, and IBF super flyweight champion Jerwin Ancajas will be facing Ryuichi Funai (31-7, 22 KOs) in the chief support in a Top Rank Boxing promoted card on May 4 on ESPN & ESPN Deportes at the Stockton Arena in Stockton, California. The card starts at 10:00 p.m. ET/ 7 p.m. PT.

This is going to be an interesting card. We may even see an upset in the main event with Beterbiev, 34, who has show problems with his punch resistance, and now he’s facing a big puncher capable of landing a lot of shots on his chin in 27-year-old Kalajdzic. This will be only the second title defense for Beterbiev of his International Boxing Federation 175 lb title he captured two years ago in November 2017.

Top Rank and ESPN’s decision to put the Beterbiev vs. Kalajdzic card on May 4 means they’re looking to compete with the far bigger fight between WBA/WBC middleweight champion Saul Canelo Alvarez (51-1-2, 35 KOs) and IBF champion Danny Jacobs (35-2, 29 KOs) on DAZN on the same night. What the wisdom is in Top Rank putting the Beterbiev-Kalajdzic & Ancajas-Funai card against Canelo-Jacobs is unknown. Top Rank isn’t doing Beterbiev and Ancajas any favors by having them fight on the same night as a Canelo vs. Jacobs. Even if more boxing fans tune in to watch the Beterbiev vs. Kalajdzic card, it’s not likely going to be nearly as many boxing fans as it would be if they were put on a date that didn’t have a major star like Canelo fighting.

As long as Beterbiev and Ancajas are fine with their fights likely seen by far fewer boxing fan, it’s all good. You have to assume that the fans, given a choice, are going to veer in the direction of watching the Canelo-Jacobs fight, because it’s a fight involving guys that are much well known than Beterbiev and Kalajdzic. Canelo vs. Jacobs isn’t just a small fight. Its a MAJOR one, and Top Rank has decided to let Beterbiev and Ancajas, two guys that they’re trying to build into stars, fight on the same night. It doesn’t make sense at all.

You’ve got to feel more than a little sorry for Beterbiev and Ancajas, because their fights are going to suffer greatly for lack of eyeballs to watch them due to someone’s decision at Top Rank to stage their fights on the same night as Canelo-Jacobs. That’s like staging a fight on the same night as Floyd Mayweather Jr. vs. Manny Pacquiao and hoping that a trickle of fans somehow find their way over the the network you’re showing your fight. If Beterbiev and Ancajas are going to become stars, you’ve got to hope for their sake that Top Rank doesn’t continue to have them fighting on the same night as MUCH bigger names and bigger fights.

There’s nothing wrong with Beterbiev fighting Kalajdzic and Ancajas defending against Funai. The only problem is those fights pale in comparison to the Canelo vs. Jacobs fight. Ancajas vs. Funai is a mismatch. Ancajas is a much better fighter, and he’s likely going to batter Funai around the ring like a punching bag in a fight that will be so one-sided it won’t be interesting. It’s certainly not interesting on paper. Funai, 33, has lost to guys like Sho Ishida, Rolly Lunas, Masahiro Ishida, Shinsuke Yamanaka and Takahiro Furukawa. Those are guys that Ancajas would have no problems beating.

Top Rank recently signed Beterbiev, and it’s possible they’re going to have him fighting a lot more than what he’s been doing since he turned pro in 2013. It would be surprising if they’re able to get more than a couple fights a year out of him. Beterbiev has never been a super active fighter, and it’s unlikely that he’ll suddenly start fighting three times a year. Beterbiev, 34, didn’t look great in his last fight in knocking out Callum Johnson by a fourth round knockout in a war last October. Beterbiev fought only one time in 2017 and 2018. As long as Beterbiev stays injury free, he should be able to fight at least two times a year.

The hard hitting Kalajdzic (24-1, 17 KO) will be looking to win his fourth consecutive fight since losing to Marcus Browne by a controversial 8 round split decision in April 2016. Browne looked like the loser, and got very generous scoring by the set of judges that worked the fight. Although talented enough to face upper level opposition, Kalajdzic has been fed weak opponents in Travis Peterkin, Brad Austin and Alex Theran. Those are obscure guys that reflect the weak opposition that Kalajdzic has had.

IBF 115 champion Jerwin Ancajas (30-1-2, 20 KOs) has looked unimpressive in his last three fights against Alejandro Santiago Barrios, Jonas Sultan and Israel Gonzalez. Ancajas, 27, fought to a 12 round draw against Barrios last September in Oakland, California, and he was quite fortunate to get a draw. Those three fights showed that Ancajas likely won’t hold onto his title for too much longer unless Top Rank backs him off of fighting good opposition. That’ll be bad news for Ancajas’ career if Top Rank starts feeding him fodder, but there’s not much else they can do for him. He’s not talented enough for him to be put in with the top guys, which you can argue is why Top Rank is matching him against Funai rather than a good fighter like Juan Francisco Estrada, Srisaket Sor Rungvisai or Donnie Nietes. Ancajas is young enough to improve his game, but the problems he showed in his last three fights are simply areas that will always be there.

The 33-year-old Funai has been around for awhile as a pro. He’s been winning lately since losing a 10 round majority decision to Sho Ishida three years ago in 2016. Although Funai is ranked #1 by the International Boxing Federation, in truth he should be ranked lower than that based on the lackluster opposition he’s been fighting. Winning shouldn’t be enough. Sanctioning bodies need to figure in the level of opposition when they rank fighters, and it doesn’t appear they did that with giving Funai a #1 ranking.


« Manny Pacquiao could be fighting in June in U.S