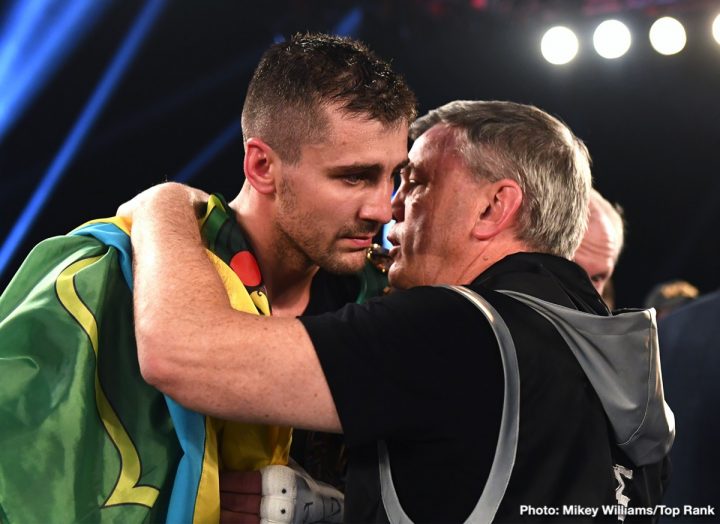 Ngumbu, 37, bowed out of the fight in the fifth round complaining of a calf injury to his right calf. The fight was stopped by referee Eric Dali at 0:58 of round five.

The victory for Gvozdyk, 31, was his first successful title defense of his World Boxing Council light heavyweight title that he won last December in stopping 41-year-old long-time champion Adonis ‘Superman’ Stevenson in the 11th round. The stoppage loss by Stevenson left him hospitalized with a brain injury, which required surgery. Despite being 1- years older, the 41-year-old Stevenson was beating Gvozdyk, and doing it basically on aggression. Gvozdyk was showing very little offense throughout their fight. It was only until the last seconds of the 10th, that Gvozdyk finally came to life after being hurt by Stevenson with a big left hand to the head that sent him flying into the ropes. The referee failed to make the knockdown call from that shot by Stevenson.

Gvozdyk fought in a lackadaisical manner throughout last Saturday’s fight against Doudou, and rarely did he turn it on. It looked at times like Gvozdyk was half asleep out there. Some believe that he was struggling with Ngumbu because he was dealing with an awkward guy that was holding a lot, and moving around the ring. However, Gvozdyk often struggles with his opponents, this was par for the course for him.

“He did what he had to do, but people wanted to see more,” Ward said about Gvozdyk’s performance against Ngumbu last Saturday night. “I think Gvozdyk showed what he’s always shown. He’s a really good boxer, he’s technical, he’s accurate, but he’s only going to get so much in terms of offense. If a guy brings a fight to him, you’re going to get more offense, but I don’t know if he has another gear mentally. He’s going to need that if he faces those other dudes in the light heavyweight division,” Ward said about Gvozdyk.

While some boxing fans may interpret Ward’s criticism of Gvozdyk to be a case of jeolousy, it appears to this writer that he’s keeping it real by pointing out obvious flaws in the Ukrainian fighter’s game. Against Ngumbu and in his previous fight against Stevenson, Gvozdyk didn’t look like he was mentally aged in the fights. He looked like he wasn’t focused and motivated properly for some reason. At times we saw Gvozdyk come alive and look like a different fighter, but mostly he fought like he lacked self-confidence. Ward reasons that Gvozdyk has trainer Teddy Atlas on his team to mentally motivate him, since Atlas is a guy that is known for being able to get into the psyche of his fighters to get the most out of them when they doubt themselves.

“Yeah, of course, absolutely,” Ward said when asked if unbeaten 2012 U.S Olympian Marcus Browne will give Gvozdyk a hard fight. “He’s a young guy that a lot of people are talking about. So if he keeps training and staying humble and hungry, he can give anybody in the light heavyweight division problems,” Ward said.

World Boxing Association light heavyweight champion interim Marcus Browne (23-0, 16 KOs) would be a lot of problems for Gvozdyk if those two were to fight. Browne has power, speed, boxing ability and athleticism that Gvozdyk hasn’t shown. A fight between them could wind up as a one-sided affair with Browne dominating, and Gvozdyk needing a late fight knockout to win. It could wind up being a more one-sided fight than Gvozdyk’s recent match against Stevenson. The good news for Gvozdyk is Browne is heading towards a fight against WBA 175 lb champion Dmitry Bivol.

Browne isn’t in Gvozdyk’s radar right now. Further, it’s questionable whether Gvozdyk’s promoters at Top Rank Boxing would ever show interest in matching him against Browne. They matched him against Ngumbu, and before fighting Stevenson, they had Gvozdyk fighting Mehdi Amar. With the exception of the Stevenson fight, which was a case of catching a fighter at the right time with him being old at 41, Top Rank hasn’t matched Gvozdyk against guys that could give him problems like Browne.

“I’ve watched him several times. I’ve been around the sport since I was a baby,” Ward said. “I also gauge him by talking to him. ‘Hey man, how do you feel about unifying the titles?'” Ward said in talking about a conversation he had with Gvozdyk. “‘Ah man, I just want to defend my belt.’ That’s not really something he’s eager to do, which doesn’t tell you everything, but it does tell you his mental makeup, and that’s part of why he may have Teddy Atlas on his team, to try and get him riled up, and to make sure he stays focused, because he showed in previous fights he has mental lapses,” Andre Ward said about Gvozdyk.

Well, if Top Rank keeps Gvozdyk isolated in his own separate league by having him only defend his WBC belt against the top contenders with that organization, then he might be able to hold onto his title for a little while. Although Browne is ranked #1 with the World Boxing Council at light heavyweight at this time, he’s expected to challenge Bivol for his WBA title. If Browne wins that fight, then he’ll be the new WBA 175 lb champion. Gvozdyk and Top Rank wouldn’t need to worry about Browne at that point. They would instead need to worry about WBC contenders Badou Jack, Eleider Alvarez and Sullivan Barrera. All three of those fighters are highly ranked, highly talented, and guys that could unseat Gvozdyk just based on being more focused in each round than him. All it takes is for those guys to outwork the disengaged, uninspired Gvozdyk for seven or eight rounds, and they’ll beat him by a decision. Having Atlas as a trainer will help Gvozdyk, but he’s not going to be able to get him to come alive every round. Last Saturday, Atlas’ pep talks didn’t do much to get Gvozdyk to put out a lot of effort. It was always sporadic stuff from the Ukrainian fighter. Atlas is going to have to work on Gvozdyk if he wants to keep unbeaten for much longer. Right now, Gvozdyk looks vulnerable, and nowhere near as polished as the other champions at light heavyweight. Top Rank likely will have Gvozdyk just defend his title against the WBC’s challengers. The guys that Top Rank are looking to match tough are Artur Beterbiev and Sergey Kovalev. Those guys look like they have more grit to them than Gvozdyk.