Whyte: ‘No one knows Oleksander Usyk” 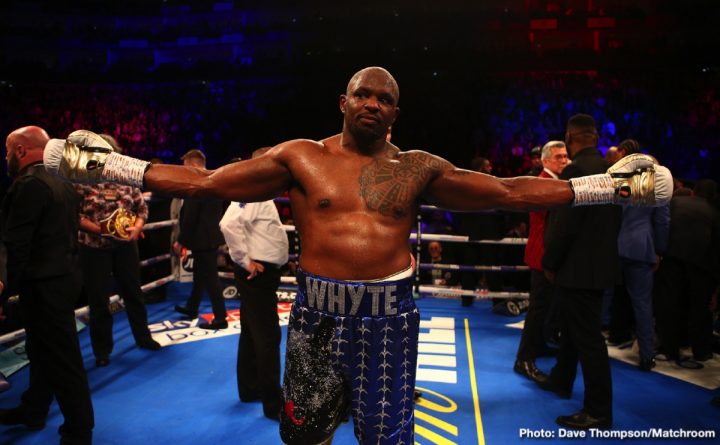 By Scott Gilfoid: Dillian Whyte (25-1, 18 KOs) seems unconcerned that he’s poised to lose his #1 ranking with the World Boxing Organization to unified cruiserweight champion Oleksander Usyk (16-0, 12 KOs) as soon as the 2012 Olympic gold medalist moves up to heavyweight to begin campaigning at that weight.

Whyte is currently ranked #1 with the WBO, and in the perfect position to get a good paying title shot against IBF/WBA/WBO heavyweight champion Anthony Joshua (22-0, 21 KOs). That spot could disappear immediately once Usyk, 32, schedules his first fight at heavyweight.

According to Matchroom Boxing promoter Eddie Hearn, Usyk will be fighting on May 18, against one of these three notable fighters from the division: Alexander Povetkin, Joseph Parker or Luis ‘King Kong’ Ortiz. Any of those guys would send shock-waves through the division if Usyk faces them and defeats them in his first fight in that weight class, especially if it’s Ortiz. Whyte still hasn’t fought the talented Cuban, who many boxing fans feel is the rightful #4 fighter in the heavyweight division, behind Joshua and WBC champion Deontay ‘Bronze Bomber’ Wilder and Tyson Fury. Whyte is viewed as number #4 by a lot of fans.

“Who? No-one knows what that guy is,” said Whyte to skysports.com. “Nothing surprises me in heavyweight boxing, nothing.”

The fact of the matter is, the talented Usyk is quickly making a name for himself in the boxing world, and he could make a lot of noise if he can take a scalp from the likes of Ortiz, Parker or Povetkin in his next fight. Those guys are all supposedly in the mix or Usyk’s first fight at heavyweight when he moves up to the division on May 18. It’ll make Whyte look incredibly bad if Usyk takes on Ortiz in his first fight in the division, because this is a guy that Dillian has never shown interest in fighting. The WBC wanted Whyte to fight Ortiz in secondary WBC title eliminator a long time ago, but there was no interest. Whyte could have been a mandatory ages ago if he took the fight with Ortiz and beat him. Ortiz’s name was brought up by Whyte recently as a potential opponent for his December 22 fight last year. Instead of taking on Ortiz and making the boxing fans happy, Whyte took a retread match against aging 35-year-old journeyman Dereck Chisora. It wasn’t the fight that the fans wanted to see, and the outcome of that match was just as controversial as the first fight. If Usyk smashes Ortiz, Povetkin or even Parker, he’s going to be a big name for Joshua to fight at some point in the near future, be it in late 2019 or early 2020. If Usyk takes Joshua’s scalp, it’s going to put Whyte on the backburner even further. Usyk’s next would be a rematch with Joshua for big cash. Joshua’s promote Eddie Hearn probably won’t risk a third fight between AJ and Usyk if Joshua loses the first two. Joshua’s career would royally implode if he lost twice in a row to Usyk. So, what we would see then is Usyk moving on and facing the winner of the Wilder vs. Fury 2 rematch. Whyte would continue to sit and wait. Whyte couldn’t just sit back and wait without fighting. He would have pressure on him to take on the likes or Ortiz, Povetkin, Parker, Adam Kownacki or Kubrat Pulev. If Whyte has to fight at least two of those guys while waiting for an eventual title shot, there’s a very good chance he’ll lose to one or even all of those guys if there’s quality officiating working the fights. It would be bad news for Whyte’s career, as he wouldn’t get a title shot the terms that he wants. Obviously, Whyte would still get the fight that he wants against Joshua, but his purse split clearly wouldn’t be what it could have been due to him losing. If Joshua is no longer the IBF/WBA/WBO champion after losing to Usyk twice, then that makes AJ vs. Whyte 2 essentially a domestic level clash, similar to what the boxing fans will be seeing between Amir Khan and Kell Brook later this year.

Whyte will be fighting on April 20 at the O2 Arena in London, England. According to Hearn, the three fighters that Whyte will be choosing from for that fight date are these guys: Alexander Povetkin, Luis Ortiz and Dominic Breazeale. However, Whyte, 30, has made it abundantly clear that he wants the 2012 U.S Olympian Breazeale (20-1, 18 KOs). A win for Whyte over the 33-year-old Breazeale would make him the new mandatory challenger for World Boxing Council champion Wilder (40-0-1, 39 KOs), and it would ensure that he gets a shot at fighting the winner of the Wilder vs. Fury II fight, which is expected to take place in the next two to three months. It’s a risky thing for Whyte to go in the direction of trying to take on the Wilder-Fury 2 winner, because he could lose to the 6’7″ Breazeale or get beaten in a championship fight against Deontay or Fury. Whyte was on his way to losing his last fight against Dereck Chisora last December when the referee stepped in and took a point away Dereck for throwing an elbow. This caused Chisora to lose his cool and throw a wild shot that Whyte countered with a left hand to score an 11th round knockout. Some boxing fans think the referee was being very helpful to Whyte throughout the fight. Whyte’s previous fight against Joseph Parker also had a referee that had a HUGE impact in the outcome of the fight with him blowing a call in the 2nd round, which gave Whyte credit for a knockdown that never actually happened. It was a head-butt from Whyte that knocked Parker down, and had him hurt. The referee blew the call. The rest of the fight, Whyte literally got away with murder with his roughhouse tactics against Parker, which arguably should have resulted in repeated point deductions.

If you look at Whyte’s last two fights against Chisora and Parker, he could have lost both of those fights with different officiating working the matches. As such, Whyte isn’t someone that can be considered a lock to beat a guy like Breazeale. Of course, if he a referee that gives him credit for head-butt knockdowns, then yeah, he’s got a good chance of beating Breazeale by roughing him up, and getting credit for non-legit knockdowns. But if it’s a referee that has his eyes open, and doesn’t blow calls on easy to see knockdowns, then Whyte could lose to Breazeale. It’s debatable whether Breazeale will even put himself in the position to put his WBC mandatory spot on the line if it means that he has to travel to the UK and fight Whyte over there, and potentially find himself on the receiving end of being roughed up or have something very odd take place. It would be better for Breazeale to stand pat, and wait for the smoke to clear from the Wilder vs. Fury rematch so that he can fight the winner of that match in the U.S where he wouldn’t have to worry about being the visiting fighter to a foreign country like he would if he fought Whyte.

Whyte believes he’ll find out who his April 20th opponent will be by next week. He’s hoping it’ll be Breazeale, but some boxing fans expect it to be Parker in a rematch. Povetkin, as well as Ortiz’s names have been mentioned, but most believe those were just thrown into the air by Hearn and Whyte in order to make the boxing public happy. The fans obviously don’t want to see a retread fight between Whyte and Parker, especially given the way their previous fight went with the blown call on the knockdown in the 2nd round, as well as the non-calls on Dillian’s fouling.


« How far can Oleksander Usyk go at heavyweight?