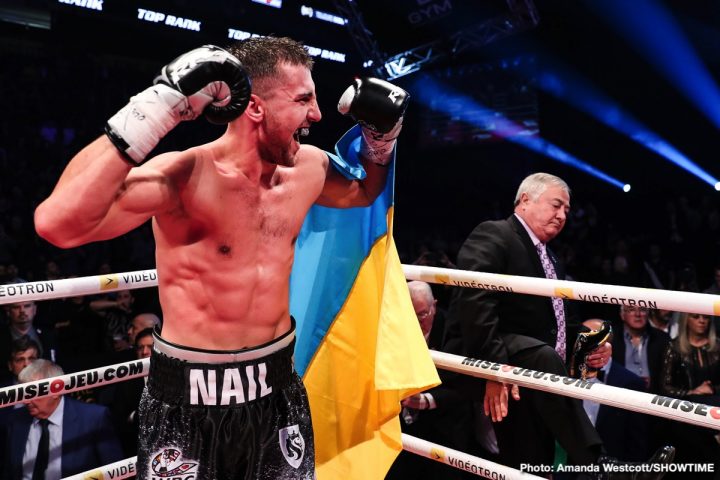 By Allan Fox: WBC light heavyweight champion Oleksander Gvozdyk (16-0, 13 KOs) will be making his first defense of his title against #8 WBC Doudou Ngumbu (38-8, 14 KOs) on March 30 in Philadelphia, according to Lance Pugmire of the LA Times.

This isn’t quite the title defense that some boxing fans were expecting from Gvozdyk after he defeated longstanding World Boxing Council 175 lb champion Adonis Stevenson in tragic fight last December that ended with the talented fighter suffering a brain injury. With Marcus Browne having recently beaten Badou Jack by a 12 round unanimous decision in a WBC eliminator, it would be too soon for him to return to the ring to taken on Gvozdyk.

Ngumbu, 36, hasn’t done much to deserve a title shot during his 12 year pro career unless you count losing each time he’ stepped it up as earning a title shot. He was beaten by Igor Mikhalkin by a 12 round unanimous decision in December 2017. That was the third time Ngumbu has lost to Mikhalkin. It’s unclear why Ngumbu has continued to fight Mikhalkin after losing to him the first time. Ngumbu, who come from Congo and lives in France, has additional career losses to Andrzej Fonfara, Umar Salamov, Nadjib Mohammedi,Pawel Glazewski and Isaac Chilemba. Ngumbu is more of a journeyman than a fringe contender at this point, and it makes you onder why Top Rank has picked him out of the pile for Gvozdyk to defend his newly won World Boxing Council title against for the first time.

Ngumbu does appear to have good punch resistance, as he’s only been knocked out once during his 12-year pro career to the hard hitting Nadjib Mohammedi. Gvozdyk punches about as hard as Mohammedi, so there’s a chance that he might be able to knockout Ngumbu if he can put hands on him often enough in the fight. With a KO percentage of just 30%, Ngumbu isn’t much of a puncher. If Gvozdyk wants to try and get Ngumbu out of there, he won’t have to worry about being clipped by something big like he was in the 11th round of his fight against Mehdi Amar last March. Gvozdyk was trying to knockout Amar when he got nailed with a big right hand that buckled his knees in the eleventh round.

Told that Oleksandr Gvozdyk will make first defense of his @WBCBoxing light-heavyweight belt March 30 in Philadelphia on @espn vs. Doudou Ngumbu (38-8, 14 KOs).