Naoya Inoue vs. Emmanuel Rodriguez announced for May 18 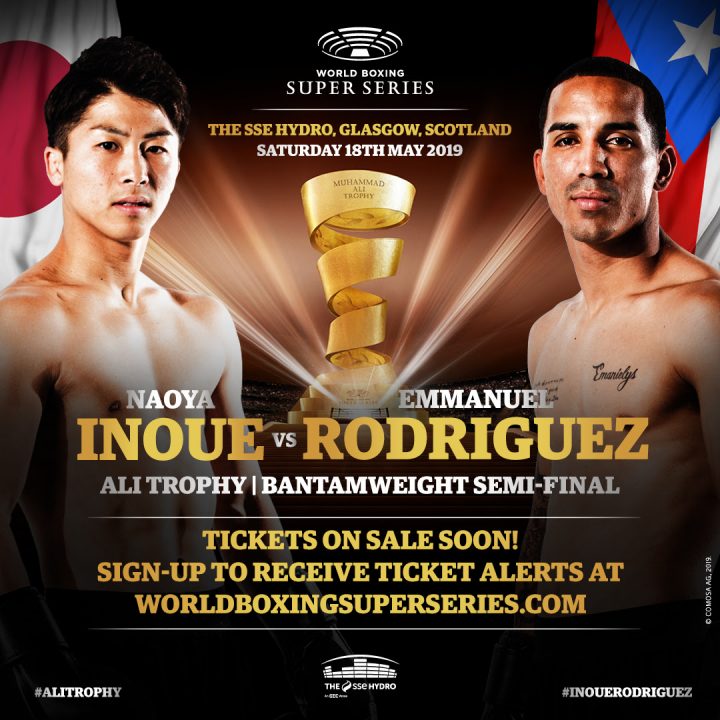 By Jim Dower: WBA bantamweight champion Naoya Inoue (17-0, 15 KOs) will be meeting up with unbeaten IBF 118 lb champion Emmanuel Rodriguez (17-0, 12 KOs) on May 18 in the semifinal of the World Boxing Super Series [WBSS] tournament on the same card as the WBSS light welterweight semifinal fight between Josh Taylor and Ivan Baranchyk at the SSE Hydro Arena, Glasgow, Scotland.

Rodriguez, 26, has got his work cutout for him in facing knockout artist and former three division world champion ‘Monster’ Inoue. This is the wrong time for Rodriguez to be running into Inoue, who has knocked out his last two opponents in the first round.

In his quarterfinal fight in the World Boxing Super Series tournament, the 25-year-old Inoue stopped Juan Carlos Payano in round 1 after hitting him with a powerful left-right combination that put him down face first on the canvas in their fight last October in Yokohama, Japan. THe fight was over with in 70 seconds of round one.

Payano is a good fighter, but Inoue made easy work of him. In Inoue’s previous fight, he destroyed former World Boxing Association World Bantamweight champion Jamie McDonnell by a 1st round knockout last May. That was a very impressive performance, as McDonnell is a good with a lot of talent. No one had ever done that to him before during his 14-year-old pro career.

McDonnell had never been knocked out before until facing Inoue, and he made it look easy. If Inoue hadn’t gotten McDonnell put of there with a shot to the body, he would have likely knocked him out with a head shot in the same round. McDonnell was completely over-matched in that fight. Right now, it’s not even fair how good Inoue is looking in comparison to his opponents. There’s no one that can handle his power long enough to get their own big punches in to make a fight of it.

International Boxing Federation bantamweight champion Emmanuel Rodriguez isn’t going into the semifinal fight in the same strong position as Naoya. Rodriguez looked shaky in beating his WBSS quarterfinal opponent Jason Moloney (17-1, 14 KOs) by a narrow 12 round split decision last October. That fight was too close. Rodriguez was barely better than Moloney. If anything, those two need to fight a rematch rather than having Rodriguez progress to the semifinal. The judges scored the fight 115-113, 115-113 for Rodriguez and 115-113 for Moloney.

“I cannot wait to box in the United Kingdom in front of their loud fans and I will show them a ‘Monster’ performance!” Inoue said.

In other semifinal match in the wBSS super bantamweight tournament, Nonito Donaire will be facing Zolani Tete.

Dillian Whyte and Dominic Breazeale willing to face each other »