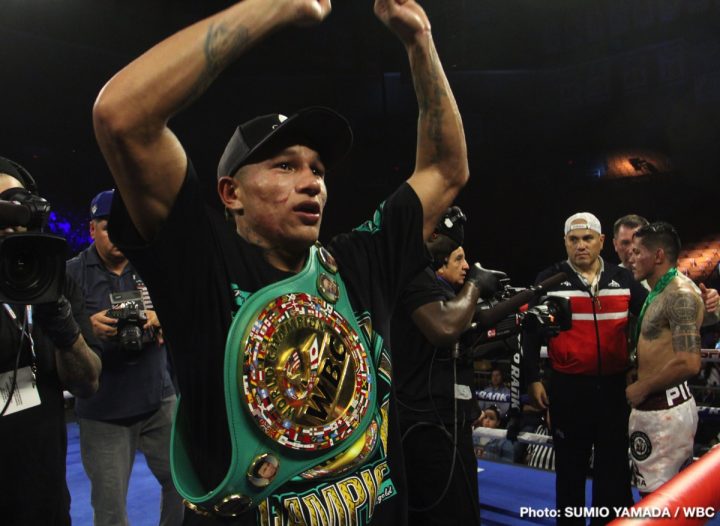 By Chris Williams: WBC super featherweight champion Miguel Berchelt (35-1, 31 KOs) has suffered a hand injury training, and his March 23 fight with former WBC 130 lb champion Francisco Vargas (25-2-1, 18 KOs) has subsequently been postponed. The February 23 card will still go ahead, but with a different main event.

The two were supposed to fight each other on Top Rank Boxing on ESPN at The Forum in Inglewood, California.

There was the possibility of World Boxing Organization featherweight champion Oscar Valdez (25-0, 20 KOs) fighting in the co-feature bout on the March 23 card, according to Dan Rafael. Valdez had an easy time in returning to the ring last Saturday night in destroying Carmine Tommasone by a 7th round knockout on the undercard of Sergey Kovalev vs. Eleider Alvarez 2 on ESPN+ at The Ford Center at The Star in Frisco, Texas. However, Top Rank will have Valdez fight later this year.

Top Rank vice president Carl Moretti says they want to reschedule the Berchelt vs. Vargas fight for May.

“We’re going to try to reschedule the fight as soon as possible, as soon as Berchelt can go. Hopefully, we can do it in May,” Moretti said to ESPN.com.

Berchelt already beat Vargas, 34, by an 11th round knockout two years ago in January 2017 to capture his World Boxing Council super featherweight title in a one-sided fight. Vargas landed some good shots in the fight, but Berchelt was the much superior fighter.

Vargas hasn’t been that active since the loss to Berchelt, fighting just twice in beating Stephen Smith and Rod Salka. The age and inactivity of Vargas might be an issue for him when he gets inside the ring with Berchelt. However, Vargas was over-matched anyway against Berchelt last time, so it probably doesn’t matter if he had been active all this time.

Berchelt was at another level talent-wise than him. Vargas would have had a good chance of picking up a title at super featherweight in the last two years if he’d gone after the WBA ‘regular 130 lb title, which is now in the possession of Alberto Machado, IBF champion Tevin Farmer or WBO belt holder Masayuki Ito. Those are all guys that Vargas would match up well against. There’s little chance that Vargas would have been able to beat beat WBA Super World super featherweight champion Gervonta ‘Tank’ Davis or former WBO champion Vasyl Lomachenko. You can’t blame Vargas for not fighting those guys.

There are a lot more interesting fights out there for Berchelt at super featherweight than a tired retread fight against a fading Francisco Vargas. The boxing world would love to see Berchelt fight the following fighters:

There are some good fights out there for Berchelt, but it doesn’t look like he’s going to be put in with of those guys. Hopefully this will be the last time Berchelt faces Vargas. It’s kind of forlorn to make rematches when one guy gets dominated and knocked out the way Vargas was against Berchelt.