Luis Ortiz vs. Christian Hammer this Sat., March 2 on SHOWTIME 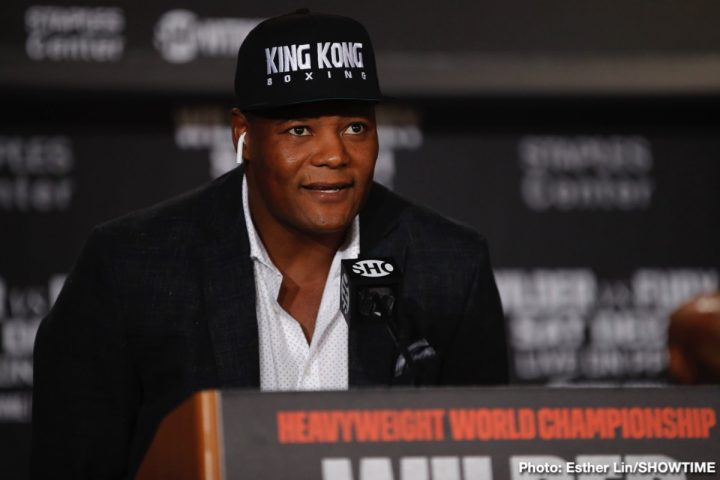 By Allan Fox: #3 WBC ranked former heavyweight world title challenger Luis “King Kong” Ortiz (30-1, 26 KOs) will be fighting this Saturday night against Christian Hammer (24-5, 14 KOs) in a 10 round fight LIVE on SHOWTIME on the Erislandy Lara vs. Brian Castano card at the Barclays Center in Brooklyn, New York.

This is a big fight for Ortiz, 39, with a lot on the line, as he needs a win over #12 WBO Hammer to stay in the hunt for a title shot against World Boxing Council heavyweight champion Deontay ‘Bronze Bomber’ Wilder and IBF/WBA/WBO champion Anthony Joshua. Recently, Joshua said that if he can’t get a fight against Wilder of Tyson Fury for later thi year, he would be looking at defending against Ortiz in a voluntary title defense. Ortiz is ranked #3 with the World Boxing Council and #8 by the WBA. To keep himself in position for a shot against Joshua or Wilder, Ortiz needs to defeat the 31-year-old Hammer this Saturday on SHOWTIME Championship Boxing and look good in doing so.

Ortiz had a chance to fight Joshua if he’d looked good in his fights against David Allen and Malik Scott in 2016. Joshua’s promoter Eddie Hearn of Matchroom Boxing wanted to put Ortiz in with him, but the way he labored to beat Allen and Scott in dull fights, it ruined his chances of getting the fight. Hearn decided against putting Ortiz in with Joshua and having the British boxing public turned off by the dull fight. It would be up to Joshua now though whether he would take the fight with Ortiz. If it’s up to Hearn to decide, he likely will never put him in with Ortiz, because he’s a threat due to his southpaw stance, power and his boxing skills. Ortiz is a better fighter all around than most of the guys that Hearn has matched against Joshua during his career.

Ortiz didn’t look that great in his last fight against Travis Kauffman last December at the Staples Center in Los Angeles, California. Fighting on the undercard of the Wilder vs. Fury contest, Ortiz stopped Kauffman in the 10th round, but he looked lazy at times, and not the same fighter that had shined in wins over Bryant Jennings, Tony Thompson, Daniel Marz and Razvan Cojanu. Perhaps you can chock that up to Ortiz possibly not being motivated against a guy that wasn’t in the same class as him in 33-year-old Kauffman. When Ortiz did turn up the heat on Kauffman in the 10th round, he got him out of there without any problems.

It’s important that Ortiz look spectacular against Hammer, because he needs to get the boxing public in the U.S excited about him so that it can lead to Joshua wanting to give him a title shot. Wilder already beat Ortiz by a 10th round knockout last March, so he’s not likely going to give him a rematch unless the WBC orders the fight if he can eventually work his way back to become the mandatory challenger for him. Ortiz almost knocked Wilder out in the 7th round after hurting him. That’s another reason why Wilder likely won’t get Ortiz a rematch unless he absolutely has to. There’s a possibility that Wilder might give Ortiz a rematch if he can’t negotiate a second fight with Tyson Fury, who recently signed with Top Rank, which will make it difficult to put together a second fight between them. Joshua is likely interested in fighting Ortiz because he realizes that he’s a bigger name in the U.S than Dillian Whyte, and is arguably seen as a better fighter than him. Whyte is rated highly in the UK where he lives, but he’s not rated as high by the U.S hardcore boxing fans, who view Ortiz as the better talent.

Hammer was beaten a year and a half ago by former WBA heavyweight champion Alexander Povetkin by a 12 round unanimous decision in December 2017. It was a mismatch with Povetkin dominating Hammer and winning by the scores 120-108, 119-109 and 120-107. Hammer didn’t have the talent to compete with the more accomplished Povetkin in that fight. Hammer lost to Tyson Fury by an eighth round stoppage in February 2015. Fury used his size to dominate Hammer for the entire one-sided fight. It wasn’t competitive at all. Hammer also has losses to Mariusz Wach and Tara Bidenko in 2010. hose fights took place a long time ago before Hammer had developed into the fighter he is today. He’s a much better fighter than he was nine years ago. Hammer was beaten in his first pro fight by Robert Gregor after suffering a shoulder injury in the first round in 2008. In the last four years of Hammer’s career, he’s beaten David Price, Michael Wallisch, Erkan Teper, Michael Sprott and Shermn Williams.

The big southpaw Ortiz will need to take the fight to Hammer if he wants to knockout him out, because he’s very good at soaking up rounds to stay in there with good heavyweight. Hammer was able to last the full 12 rounds against Povetkin in 2017. Povetkin looked like he really wasn’t trying to knock him out, though. Hammer will likely try and box Ortiz the way he was doing with Povetkin, and the fight could turn into a match where the judges need to decide who did the slightly better work each round. Hammer could make it ugly in order to win a narrow decision. If he tries to slug with Ortiz, he’s going to wind up getting planted. Ortiz has too much punching power, and his southpaw stance will be a nightmare for Hammer.