Kovalev to fight in June on ESPN, possibly against Sullivan Barrera 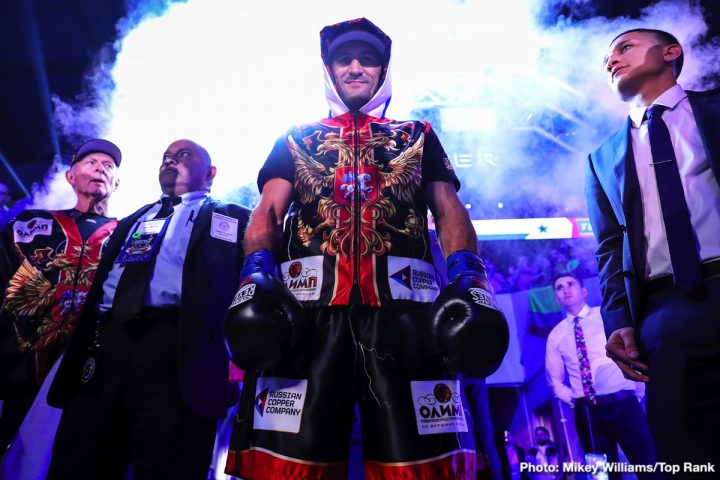 By Allan Fox: WBO light heavyweight champion Sergey Kovalev (33-3-1, 28 KOs) will be making his first defense of his title in June on ESPN, potentially against #7 WBO ranked Sullivan Barrera (22-2, 14 KOs), according to ESPN.com.

This will be a voluntary defense for Kovalev, 35, who regained his World Boxing Organization 175 lb title earlier this month in defeating Eleider Alvarez (24-1, 12 KOs) by a 12 round unanimous decision in their rematch on February 2 in Frisco, Texas. Kovalev had lost to Alvarez by a seventh round knockout last August in Atlantic City, New Jersey.

“We’re waiting for a date in June on ESPN,” Kovalev’s promoter Kathy Duva of Main Events said to espn.com.

It’s not a certainty that Kovalev will be defending against Barrera. He’s someone that Kovalev’s promoters at Main Events are thinking about putting in with him for a fight in June in New York or New Jersey. Whether it happens it happens or not will depend on how the negotiations go. Barrera is now longer with Main Events. If he was still with them, the chances of the Kovalev vs. Barrera fight getting made would be excellent.

It’s hard to imagine Barrera not taking this fight. It would be a great opportunity for Barrera to fight someone that has shown to have stamina and a chin problem in the recent past. Barrera can punch, and he’s a smart fighter. Barrera will look to throw body shots against Kovalev to wear him down just like Andre Ward did in his two fights with him. Eleider Alvarez beat Kovalev last year by focusing on head shots, so he’s beatable either way.

Barrera, 36, had been in negotiations for a title shot against IBF light heavyweight champion Artur Beterbiev (13-0, 13 KOs), but the two were unable to put together a deal. Barrera was knocked out last March by WBA champion Dmitry Bivol in the 12th round. Barrera was competitive in the later rounds of the fight before being stopped in the 12th round after Bivol got his second wind. The first half of the fight was one-sided with Bivol hitting the former Cuban amateur talent Barrera with a lot of hard shots, which he took well.

The reason Kovalev can’t fight Beterbiev next is Main Events wants him to fight in June. Beterbiev won’t be available to fight during that time due to Ramadan. Beterbiev will fight in May, and that’s not when Kovalev is fighting. He’ll be going in June.

Beterbiev called out Kovalev after his win over Eleider earlier this month, but it doesn’t appear that the two champions will be looking to make their unification fight between them just yet. Kovalev posted on social media last week that he’s interested in fighting Beterbiev in a unification match, but he’s not sure when it’ll happen. Kovalev says he doesn’t make the fight. He has promoters that put his matches together. But he does see the Beterbiev fight taking place in the future at some point, as long as the two keep winning.

The WBO is taking their time in ordering a fight title shot for #1 contender Anthony Yarde (17-0 16 KOs). That’s who Kovalev should be fighting if the WBO would get around to ordering the title defense. Whether Yarde would accept the title fight with Kovalev is another thing. The British fighter is trying to build experience fighting different guys to prepare him for an eventual title shot for the WBO belt. The sanctioning will likely order the Kovalev vs. Yarde fight soon. When that happens, it’s going to be interesting to see if Yarde takes the fight or turns it down. Yarde will lose his #1 ranking with the WBO if he says no to the fight.