Joshua v Miller: Ticket Information, How & Where to Watch 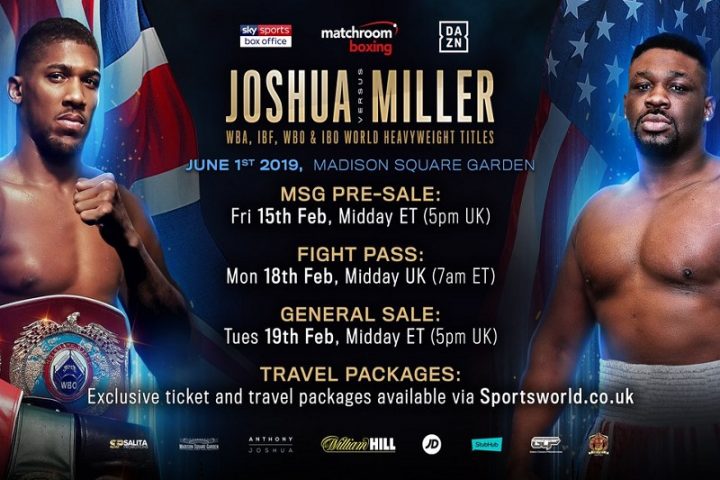 Anthony Joshua’s World Heavyweight title clash with Jarrell Miller at Madison Square Garden is already the hottest ticket in New York after becoming the highest grossing pre-sale for a boxing event at the famous arena.

Joshua defends his WBA Super, IBF, WBO and IBO crowns against Miller on June 1 in the Big Apple, live on DAZN in the US and on Sky Sports Box Office in the UK – and fight fans showed their appetite to see the Briton make his American debut in the backyard of the unbeaten Brooklynite, breaking the highest grossing pre-sale in MSG boxing history inside two hours of the midday on-sale.

Tickets go on general sale at midday on Tuesday February 19 following Monday’s pre-sale for Matchroom Fight Pass members, and fans hoping to snap up the chance to see the World’s premier Heavyweight lock horns with the dangerous ‘Big Baby’ should move fast on Tuesday to avoid missing out on this blockbuster night.

“We know that AJ is a huge box office hit in the UK but to break the pre-sale record at the iconic Madison Square Garden is astounding,” said promoter Eddie Hearn. “We are building a huge event on June 1 and we look forward to the all the build-up beginning with next Tuesdays press conference in New York.”

“We are thrilled with the early excitement for tickets,” said Joel Fisher, executive vice president, MSG Marquee Events. “Anthony Joshua versus Jarrell Miller will be an epic event at Madison Square Garden and we encourage fans to purchase tickets now because this fight will sell out.”

Oleksander Usyk vs. Alexander Povetkin planned for May 18 in Chicago »