Jose Ramirez vs. Ray Beltran in the works for summer 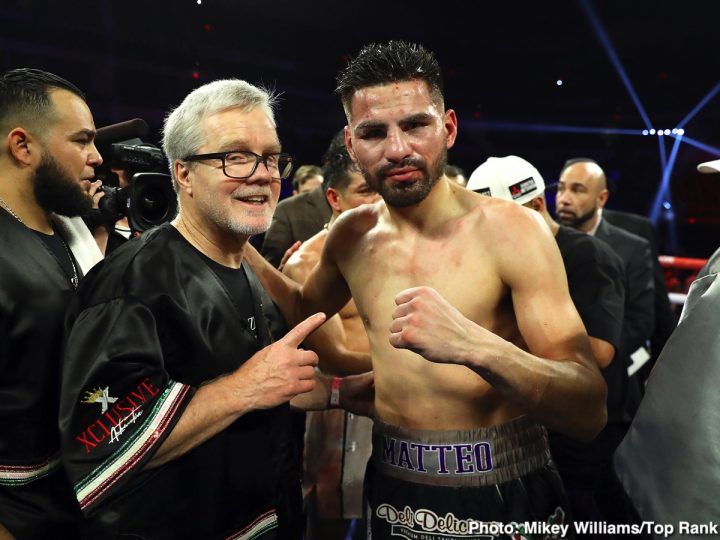 By Chris Williams: Negotiations have started for a fight between WBC light welterweight champion Jose Carlos Ramirez (24-0, 16 KOs) and former WBO lightweight champion Raymundo Beltran (36-8-1, 22 KOs) for a fight this summer, according to Mike Coppinger. Beltran and Ramirez are both with Top Rank, so it’s going to be an easy fight for them to make.

Beltran is ranked #12 with the World Boxing Council at 140, so this obviously isn’t the case of the best fighting the best. Beltran was recently beaten by Jose Pedraza by a one-sided 12 round unanimous decision two fights ago in August of last year. Beltran lost his WBO lightweight title in that fight. Beltran had recently won the vacant WBO belt in February of last year in defeating 40-year-old Paulus Moses by a 12 round unanimous decision.

Ramirez vs. Beltran will be seen as a disappointing fight in the eyes of a lot of boxing fans, because they wanted to see Jose finally face someone good instead of him taking easy fights. There’s nothing wrong with Beltran, but he’s about to turn 38-years-old in July, and he was recently beaten. With Ramirez not taking part in the World Boxing Super Series tournament to face the best guys at 140, he could make some fans happy if he chose to defend his WBC title against the likes of Viktor Postol, Sergey Lipnets or Yves Ullysse Jr. instead of an older guy that is seen better days like Beltran.

This fight was expected to be made after Beltran fought on the undercard of Ramirez’s last fight against Jose Zepeda (30-2, 25 KOs) earlier this month on February 10 at the Save Mart Arena in Fresno, California. Beltran defeated Hiroki Okada (19-1, 13 KOs) by a ninth round knockout in his first fight at 140 after moving up in weight from the 135 lb division. For his part, Ramirez, 26, have a real nightmarish time beating Jose Zepeda (30-2, 25 KOs) by a controversial 12 round majority decision in his hometown of Fresno, California. A lot of boxing fans thought Zepeda did enough to deserve the victory. The results of that fight were controversial enough to rate a rematch, but it doesn’t look like it’s going to happen based on today’s boxing news.

The fight that the fans want to see Ramirez in is against Regis Prograis (23-0, 19 KOs), who won the interim WBC light welterweight title last year in March in stopping Julius Indongo in the second round. Top Rank wanted to wait to let the Ramirez vs. Prograis fight marinate before they let it happen. Had Top Rank let Ramirez fight Prograis last year, there’s an excellent chance that he would have lost his title in his first defense, and he would be in a much different situation now than he currently is. The decision to let the Ramirez vs. Prograis fight marinate worked out well in Top Rank’s favor.

Prograis decided he didn’t sit around and wait for his mandated title shot, so he chose to enter the World Boxing Super Series light welterweight tournament. Prograis won his quarterfinal fight in beating former WBO lightweight champion Terry Flanagan by an easy 12 round unanimous deciison, and he’ll next be facing WBA ‘regular’ 140 lb champion Kiryl Relikh. Prograis is expected to win the WBSS tournament, and then set his sights on fighting Ramirez. It’s possible Ramirez will wind up vacating his WBC 140 lb title before Prograis gets a chance to fight him, because there’s a chance he might move up and go after WBO welterweight champion Terence Crawford in the near future. If Ramirez doesn’t move, he’s going to have to face Prograis if he wins the WBSS tournament like many expect him to.

Since winning the WBC 140 lb title last year in March in defeating Amir Imam by a 12 round unanimous decision, Ramirez has successfully defended his WBO title twice in beating Antonio Orozco and Jose Zepeda. This will be Ramirez’s third title defense in defending WBC belt against Beltran.

The Freddie Roach trained Jose Ramirez will likely be a huge favorite to defeat Beltran this summer when that fight takes place. Beltran looks good when matched against certain guys, but he’s not in the same league as Ramirez. Beltran will have major problems dealing with Ramirez’s size, high work rate and youth.


« Deontay Wilder vs. Tyson Fury II NOT happening next