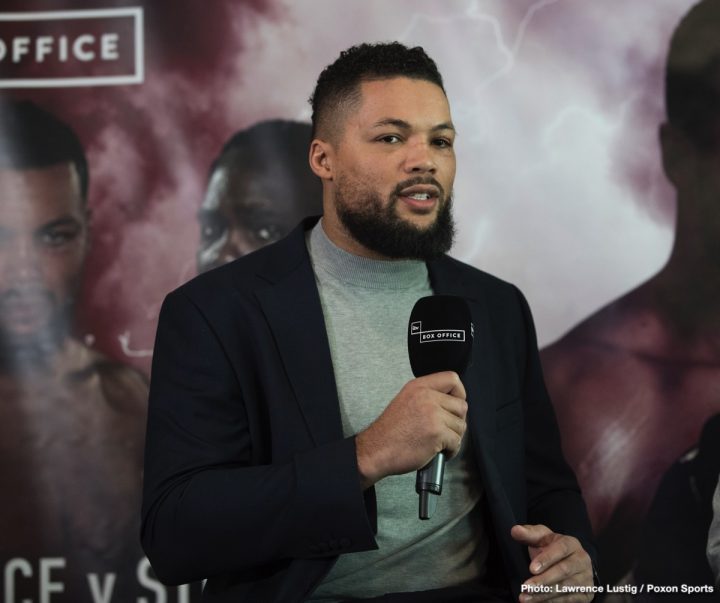 By Mike Smith: Joe Joyce’s fight with inactive heavyweight Bermane Stiverne (25-3-1, 21 KOs) has been elevated to a WBA heavyweight title eliminator by the sanctioning body for their 12 round fight this Saturday night at the O2 Arena in London, England.

The winner of the ‘Juggernaut’ Joyce (7-0, 7 KOs) vs. Stiverne fight will the mandatory challenger to WBA ‘regular’ heavyweight champion Manuel Charr (31-4, 17 KOs). It’s more than a little strange for the World Boxing Association to have made the Joyce-Stiverne fight an eliminator given that Stiverne hasn’t fought since his first round knockout loss to WBC champion Deontay Wilder in November 2017. That was 15 months ago, and was an embarrassing knockout loss for the then 39-yer-old Bermane.

Stivene hasn’t done anything to deserve being in the WBA’s title eliminator against Joyce unless you losing to Deontay as a way of earning the spot.

It would have been a reasonable move for the WBA to name a fight between Joyce and Luis ‘King Kong’ Ortiz a title eliminator, but obviously that fight failed to happen due to Joe’s trainer Abel Sanchez not wanting the ‘Juggernaut’ to face the more experienced Cuban. Joyce vs. Ortiz would have been a worthwhile fight for a WBA heavyweight title eliminator. Joyce vs. Stiverne clearly is not. Stiverne hasn’t won a fight in four year since his 10 round unanimous decision win over Derric Rossy in November 2015.

Joyce said in an interview that he wants to possibly fight Ortiz later this year. However, Joyce didn’t sound sure that the fight with Ortiz, 39, would get made. He just said that it’s one that he would like. With his trainer Abel Sanchez saying not to Ortiz, it’s not probable that he’ll change his mind about that later this year. At this point it doesn’t even matter. The WBA has made up their mind that the Joyce vs. Stiverne fight is going to be a title eliminator for their WBA ‘secondary’ heavyweight title. As such, the winner of the Joyce vs. Stiverne fight with be the mandatory for that title. If the WBA turns around and orders the winner of the fight to face Charr, then Ortiz won’t be an option, which it doesn’t sound like he is anyway. Sanchez says he wants Joyce to gain experience for Stiverne’s fighting style. That sounds like code for, Sanchez wants a punching bag style opponent. Joyce has already beaten a guy just like Stiverne in Ian Lewison in his first fight as a pro. Even Joyce admits that Stiverne is just like Lewison with the way he fights.

Charr, 34, will be an easy mark for the winner of the Joyce-Stiverne fight. Charr has been out of the ring for 15 months since his win over Alexander Ustinov in November 2017. That inactivity won’t help Charr for when he gets inside the ring with Joyce or Stiverne. Both guys would have a good chance of knocking out Charr without any problems.

Brandon Rios – Humberto Soto on Saturday – Where and How To Watch »