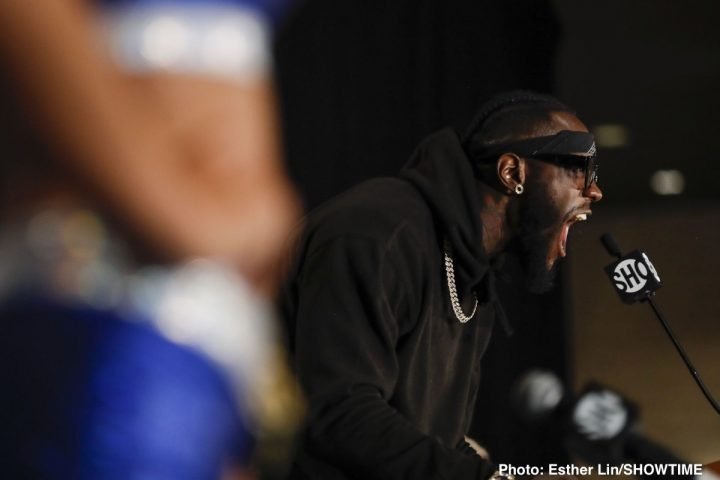 By Chris Williams: Eddie Hearn says he’s willing to offer WBC heavyweight champion Deontay Wilder a two-fight deal with DAZN after the unbeaten champion revealed last Tuesday night that he’s a promotional free agent, and can fight on any network.

For Wilder to sign with Hearn and DAZN, he would need to trust the British promoter, and he’s said recently that he doesn’t trust him. With all the baggage from the two failed negotiations for the Joshua vs. Wilder fight, it’s nearly impossible to believe that Deontay would sign with DAZN to make Hearn happy. If Wilder does sign with DAZN, then that could immediately impact his chances of getting the rematch with Tyson Fury. Right now, that fight is doable due to Wilder being a promotional free agent. He can fight Fury on ESPN. But if Wilder inks with DAZN, then that could result in him narrowing his options being stuck with just fights with Hearn’s Matchroom fighters Joshua, Jarrell Miller and Dave Allen.

It’s important for Wilder that he face Fury in a rematch in order to clear up the controversy of their last fight on December 1, which was scored as a 12 round draw. Wilder can make a lot of money in the rematch with Fury. However, if Wilder signs with DAZN, then he’ll get good money for signing, but then he could lose the Fury fight, which would put him back to square one. Wilder might not be coming out ahead if he inks with DAZN, and loses the Fury rematch in the process. The Joshua will be there, but it might not be under the terms that Wilder wants it to be.

Hearn wants to sign Wilder (40-0-1, 39 KOs) to DAZN, and have him fight his first fight of the deal in the summer before facing Anthony Joshua in a unification fight with all the heavyweight titles on the line. Joshua (22-0, 21 KOs) holds the IBF, WBA and WBO heavyweight titles. He’s got a fight coming up on June 1 against Matchroom Boxing USA fighter Jarrell ‘Big Baby’ Miller (23-0-1, 20 KOs) ob DAZN at Madison Square Garden in New York.

Hearn sounds like he’s just now hearing that Wilder doesn’t have an exclusive deal with SHOWTIME. If he’s only now finding out, then he make try and actually sign Wilder. Whether that leads to an eventual fight between Wilder and Joshua is debatable. Wilder wants the fight with Joshua, but it has to be a two-way street. If Wilder does sign with DAZN, it could be a good deal for the boxing fans. There would be the Joshua fight for Wilder, and maybe even a match against Jarrell Miller or Filip Hrgovic. Wilder and Miller are said to have sparred with each other in the past, and it didn’t turn out too well for ‘Big Baby.’

Wilder is still hoping to get a rematch with Tyson Fury on May 18, but that fight is now up in the air with the news of Tyson signing with Top Rank Boxing on ESPN. Wilder made it clear this week that he can fight Fury on ESPN, that’s not a problem for him. What is potentially a problem is Top Rank promoter Bob Arum talking about wanting to delay the Wilder vs. Fury rematch until September so that the fight can marinate and bring in more pay-per-view buys. Arum believes the Wilder-Fury rematch could pull in 1 million to 2 million viewers on ESPN. Their fight last December brought in 325,000 buys on SHOWTIME. Arum isn’t saying who Fury would be fighting in the meantime to help build his popularity on ESPN, but it probably one of his guys with his Top Rank stable.

DAZN and ESPN has a good relationship,” Hearn said to the media when asked whether it’s possible to put a fight together between Matchroom fighter Anthony Joshua and Tyson Fury, who signed with Top Rank Boxing this week and will now be fighting on ESPN. “Can we make that fight? Yes, I believe we can.”

Joshua vs. Fury could be a much tougher fight to put together than Hearn says it will. With Joshua still not a big name in the U.S, he needs to fight more guys than just the 315 pound Jarrell Miller for him to become a big star in the U.S. Just beating Miller isn’t going to do the job for Joshua in transforming him into a major star in the U.S. Joshua might become popular in New York city after he beats Miller, but there’s rest of the country that won’t be impressed with him, and won’t care too much that he beat an unproven New Yorker with a weight problem. Top Rank obviously wants to put on Joshua vs. Fury fight at some point, but probably not right away until the match gets a chance to marinate more. It’s the same with the Wilder vs. Fury 2 rematch. If Top Rank wants Wilder and Fury to become more popular before they make that fight, then they’re not going to pull the trigger in letting it happen in May of this year.