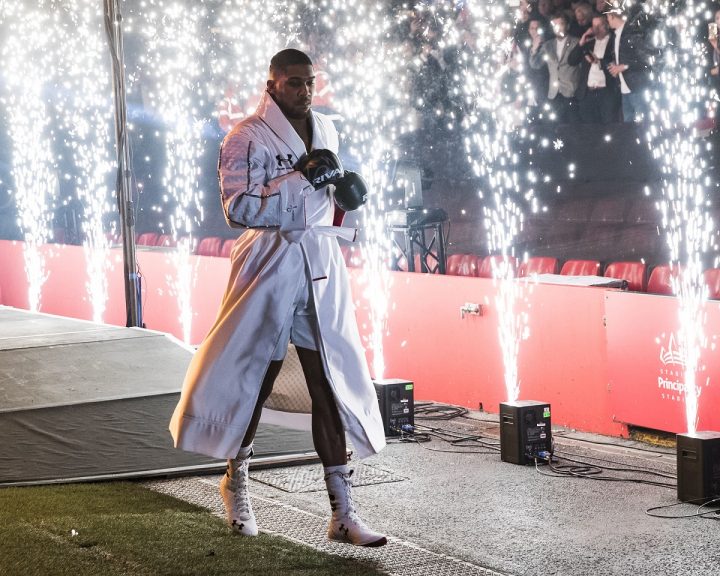 By Dan Ambrose: Eddie Hearn says Anthony Joshua was left with no other choice but to defend his heavyweight titles against Jarrell ‘Big Baby’ Miller on June 1 after coming up empty in trying to get fights with Deontay Wilder, Tyon Fury and Dillian Whyte.

Fury and Wilder weren’t available to fight Joshua (22-0, 21 KOs), because they’re facing each other in a rematch in May. Further, Hearn’s negotiation attempts with Whyte were unfruitful. The two failed to agree on a deal for Joshua’s next fight. That left Miller (23-0-1, 20 KOs) as the last man standing.

There were other options obviously for Joshua if Hearn were willing to look in the direction of Luis ‘King Kong’ Ortiz, Kubrat Pulev, Adam Kownacki, Joe Joyce, but Hearn liked the idea of matching AJ against unbeaten New Yorker Miller, who he also co-promotes. Having Miller as one of Hearn’s Matchroom stable fighters clearly helped make the choice easier.

“Miller is undefeated and a local to New York,” Hearn said to skysports.com in giving his reasons for picking him as Joshua’s opponent for June 1. “The public demand was for the Wilder or Fury fight, but with those set for a rematch ordered by the WBC, we were left with the options of Dillian Whyte or Big Baby Miller. We weren’t able to close the Dillian Whyte fight. The time was right for a change,” Hearn said.

The only change really for Joshua was the location of the fight with it taking place inside the U.S rather than in the UK where he’s been fighting. Miller, 30, isn’t much different from the guys that Joshua has been facing. Miller is obviously built different, and he fights differently the the opposition that Joshua, 29, has been beating since he turned pro in 2013, but he’s about the same talent level of the recent guys AJ has been beating. Joshua has recently beaten Alexander Povetkin, Joseph Parker and Carlos Takam. Miller fits in nicely with those guys as far as his ability. Miller is no better or no worse than those guys. Povetkin is more talented, but he’s almost 40-years-old now, and not the guy he was years ago. Miller at this point is about where Povetkin is right now. Joshua isn’t changing the the talent level of his opposition. He’s changing the location only crossing the Atlantic Ocean to fight in New York against one of Hearn’s Matchroom stable fighters.

This is a fight that Hearn is hoping will transform Joshua into a star overnight in America. Hearn is idealistic and more than a little naive in him projecting how Joshua will be perceived afterwards by American boxing fans. Perhaps if America was the size of Idaho, for example, Joshua would make a big splash by beating Jarrell Miller on June 1. If the U.S was a tiny country where everyone knew who Miller was, and they all thought he was the greatest thing since sliced bread, then a victory by Joshua would create a big stir. However, even then you’re talking about boxing fans that probably wouldn’t like the idea of seeing one of their local fighters being beaten by a foreign fighters, so they wouldn’t necessarily become big fans of Joshua.

Did American Errol Spence become a huge fan favorite for UK boxing fans after he knocked out Kell Brook? No, he didn’t. Spence hasn’t been adopted by UK boxing fans after his win over homegrown guy Brook. It’s no different with American fans. They’re not going to become huge fans of Joshua just because he beats Miller.

“This is a major moment in his career to branch out and become and international star,” Hearn said about Joshua.

In truth, this fight for Joshua in the United States will likely be a one and done thing. Once Joshua is done with Miller, Hearn will probably book a large stadium like Wembley for his next fight against someone like Whyte, and then hope that 90,000 boxing fans fill it. Hearn isn’t going to bring Joshua vs. Whyte over to the U.S to have the fight fought in front of a small crowd. The fight will be back in the UK. Hearn has made it clear that if Wilder faces Joshua, the first fight would be in the UK.

Obviously if Fury faces Joshua, it’s going to be fought in the UK as well. So all this talk from Hearn about Joshua supposedly branching out to fight in the U.S to become a star over there, it’s ‘pie in the sky’ type of talk from him. It sounds nice to listen to Hearn talk about Joshua becoming a star in the U.S by fighting there, but it’s unlikely to be realized. You hate to be the one to burst Hearn’s bubble, but the fact of the matter is, Joshua is not going to become a star by fighting the 315 pound Miller in the U.S, and then returning to the UK to have his next three to five fights all take place there. Hearn doesn’t want to give up what he and Joshua have helped build over in the UK with massive amounts of fans coming to see him fight live in large football stadiums. It’s unclear how much money Joshua makes from the game from selling out large 70,000 to 90,000 seat stadiums, but it must be significant enough for Hearn o be talking about this a lot.

Once Joshua is done with Miller, if Hearn can’t put a deal together with Fury or Wilder, then AJ is likely going to be facing Whyte in the UK for his next fight. Hearn wasn’t able to put a deal together with Whyte this time, but if he beats Dominic Breazeale in their World Boxing Council ordered fight for the interim WBC title, then Eddie will likely try harder to make that. Of course, Hearn might choose to wait until Whyte faces the winner of the Wilder vs. Fury fight before he makes a decision whether to match Joshua against him. Hearn seems to want Whyte to beat the Wilder-Fury winner. That’s a strange thing for Hearn to want.

If Whyte beats the winner of the Wilder vs. Fury, then reduces the number of big fights for Joshua to just one. Instead of Joshua making big money fighting Whyte as well as the Wilder vs. Fury 2 winner, he would only be getting the one fight with Dillian. It’s a bad deal for Joshua. That’s why you have to wonder why Hearn badly wants Whyte to beat whoever emerges as the winner in the Fury vs. Wilder rematch. It looks to this writer like Hearn sees Wilder and Fury as threats to Joshua, so he’s hoping that Whyte will remove that threat. Then Joshua won’t have to ever fight Fury or Wilder. It kind of shows you much confidence Hearn has in Joshua If Hearn believed in him, he would keep Whyte away from Wilder and Fury, and he would have Joshua fight them.