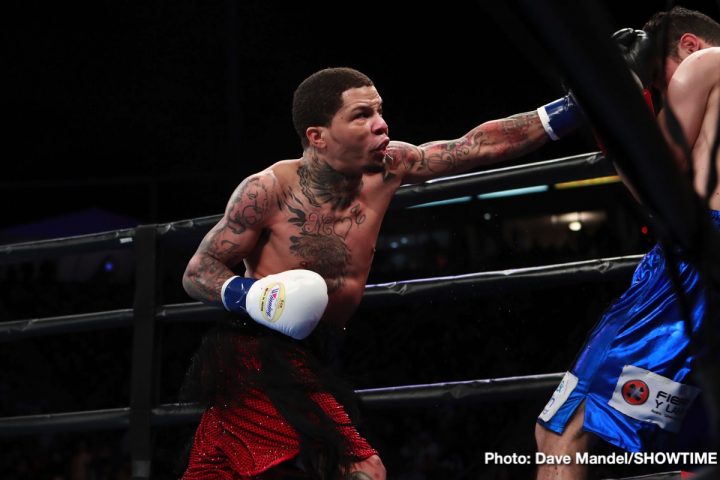 By Chris Williams: Gervonta ‘Tank’ Davis out-punched WBC heavyweight champion Deontay Wilder and the highly ranked contender Dominic Breazeale earlier this week at the PBC Fox studio on a machine that is designed to gauge the punching power. What the test showed is Davis punches with the same power as the heavyweights.

Tank Davis has got heavyweight punching power. You can only imagine what would happen to someone like Vasyl Lomachenko or anyone in the lighter weight classes if Davis hits them cleanly.

Wilder had earlier tested at 927 on the machine. To the surprise of many, the 5’5 1/2″ WBA Super World super featherweight champion Davis (21-0, 20 KOs) tested with great punching force than Wilder and Breazeale.

When it came time for the southpaw Davis to punch, he registered a 939 with a left-hand punch. Moments later, Breazeale tested at considerably weaker than Tank Davis at 889 with a punch with his right hand. Breazeale then said, “Oh man, it’s rigged,” in claiming that that there was something out of sorts for him to be testing weaker than a guy that fights nine weight classes below him.

Did he just beat The Champ? @BronzeBomber challenges @Gervontaa and @TroubleBoxing to see who really packs the biggest punch! 😳 pic.twitter.com/WaD2YSU2tq

Some boxing fans compare Davis to Mike Tyson with the way he was built in a short, compact manner, and he would knockout guys with tremendous shots.

In fairness to Wilder, the 927 that he registered on the punching machine came from a left hand punch instead of a fight hand shot. Wilder is right handed, and he’s a tremendous puncher. It’s unlikely that Gervonta Davis would have been able to out-punch Wilder on the machine. But what Davis’ power did show is he’s a major puncher at super featherweight. This is bad news for Top Rank Boxing star Vasyl Lomachenko, because if he faces Davis, who punches like a heavyweight, he’ going to be in a world of hurt each time he gets hit with anything from him.

Davis is coming off of a first round knockout over former WBC super bantamweight champion Hugo Ruiz on February 9 in Carson, California. No one had ever knocked Ruiz out so quickly before. Davis’ power is extraordinary. In three out of his last four fights, Davis has knocked out his opponents early within three rounds. He stopped former WBA featherweight champion Jesus Marcelo Andres Cuellar (28-3, 21 KOs) in the third round last April in an impressive performance. In 2017, Davis stopped Liam Walsh in the third round.