This is going to be a tough fight for Lara in facing 29-year-old amateur star Castaño on Saturday night at the Barclays Center in Brooklyn, New York. Castaño beat Errol Spence Jr. in 2011 when the to were in the amateurs competing at the 1st Pan American Games Qualifying Tournament. Both fighters were 21-years-old. You can’t say that Spence was at a disadvantage in facing the Argentinian Castaño in terms of his age, because both guys were the same age. Castaño was just a lot quicker than Spence, and he got the better of him with his combination punching to defeat him by a 20-11 score. Castaño also defeated Sergiy Derevyanchenko in the World Series of Boxing in 2012-2013 competition. Castaño was too quick for Derevyanchenko.

#2 WBA Lara is getting a fast title shot after losing his last fight 11 months ago. It’s good for Lara to be given a crack at a title without having to work his way into position for the fight.

This will be the first fight back for the 35-year-old Lara since he lost his WBA Super World 154 lb title to IBF champion Jarrett Hurd last April in a unification fight. Lara barely lost the fight to the hulking Hurd in getting beaten by a 12 round split decision. The fight looked to be going in Lara’s direction heading into the final round, but Hurd was able to turn up the heat to score a knockdown to get the victory. The final judges’ scores were 114-113, 114-113 for Hurd, and 114-113 for Lara.

Lara vs. Castaño is presented by Premier Boxing Champions, and will be taking place at the Barclays Center in Brooklyn, New York.

“It’s great to have another chance to fight for a world title and work toward getting my top spot back,” Lara said.

You can’t say that Lara was ever the #1 fighter at 154. Even though Lara held the WBA title from 2014 to 2018, he never proved that he was the best fighter in the junior middleweight division. There was overlap during those years with Hurd and Saul Canelo Alvarez fighting in that weight class. Lara lost to Canelo n 2014. During the four years that Lara was the WBA 154 lb champion, he was spoon-fed lesser opposition by his management. Lara’s wins as the WBA champion came against these fighters: Terrell Gausha, Yuri Foreman, Vanes Martirosyan, Jan Zaveck, Delvin Rodriguez and Ishe Smith.

It would have been nice to see how Castaño would do against #1 WBA Kell Brook. That’s the guy that should be fighting for a world with the World Boxing Association right now, but the British fighter is waiting for a big money fight against Amir Khan.

“I’m here to win and show everyone that I’m the best 154-pounder in the world,” Lara said. “I’m going to take a big step in cleaning out the division on Saturday. I’m going to be at my best and bring home the victory.”

The talented former Cuban amateur star Lara isn’t going to out-speed Castaño in this fight. If Erislandy wants to win, he’s going to have to turn the fight into a brawl, and hope that he can out-punch Castaño. It’s not going to work for the southpaw Lara to try and out-box Castaño, because he’s going to be forcing him to punch with him just like Jarrett Hurd did. Castaño doesn’t possess the size or the power that Hurd has going for him, but he’s very quick, and he throws a lot of punches. Lara will need to catch Castaño with a perfect shot for him to hurt him.

The much bigger Derevanchenko wasn’t able to hurt Castaño in their fight years ago. Lara will need to land a good shot if he wants to score a knockout. Castaño is more of a big welterweight than a true junior middleweight. If and when Castaño ends up taking on a big guy like Hurd or possible Jaime Munguia, his lack of size will become apparent against those fighters. Castaño got away with being the smaller guy against Derevyanchenko, because their fight was only six rounds. If Castaño had to go 12 rounds against a bigger guy, he would likely get chewed up and worn down. Hurd and Munguia would be really hard fights for Castaño, because he puts himself in harm’s way to to throw a lot of shots. He can’t do that against the bigger guys in the division. Lara did a pretty good job of staying there with Hurd for the first 11 rounds in matching him punch for punch. If Lara is able to do that against Castaño on Saturday, he’ll likely beat him. Castaño can’t take the kind of shots that Lara was landing on Hurd without coming apart.

“My experience, the styles of the fighters and our power. It’s all going to play a big role in this fight,” Lara said.

As good as Castaño is, his experience as a pro is extremely limited. His best win came recently with him stopping Cedric Vitu (47-3, 19 KOs) in the 12th round last year in March. Castaño defeated Michel Soro (33-2-1, 22 KOs) by a 12 round split decision in July of 2017. Soro and Vitu are both from France. They’re good fighters, but not in the same class talent-wise as Hurd, Lara and Munguia. Castaño barely beating Soro suggests that he might lose to Lara on Saturday night. Castaño should have been able to beat both guys with ease, but he struggled at times against both. Lara has a pretty good idea of what he’s facing in Castaño. The fact that Lara is so confident suggests that he believes he’s going to win on Saturday without any problems. Lara has the boxing pedigree to win this fight, as long as he doesn’t get outworked by the Argentinean fighter.

On paper, Castaño is a bad style match-up for Lara. With Lara’s low punch output, he’s going to get outworked if he fights stationary for any length of time. Lara has to land the harder shots, move, and hope that he can knockout Castaño. It may prove to be too difficult for Lara to win a decision against this guy. The fighters that stand a better chance against Castaño are the bigger punchers like Jermell Charlo, Hurd and Munguia. 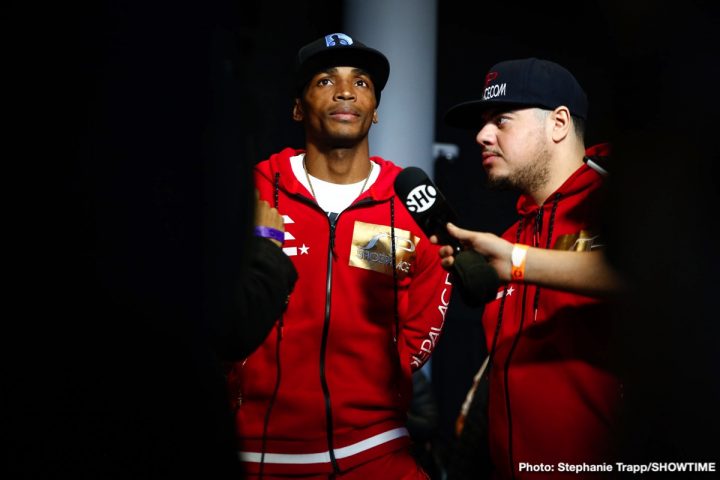 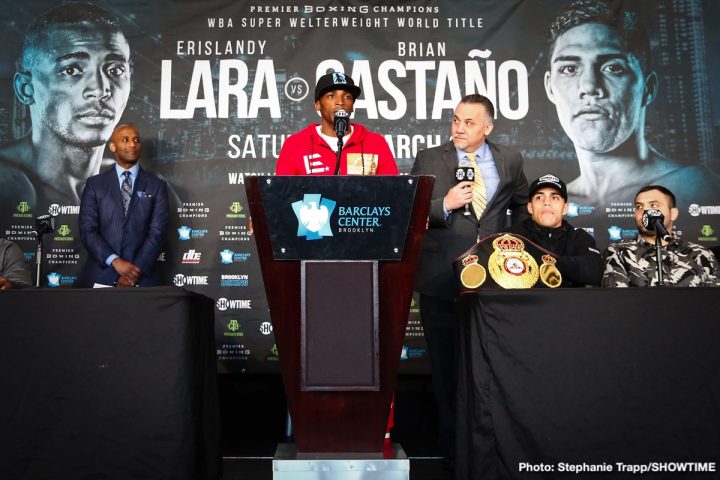 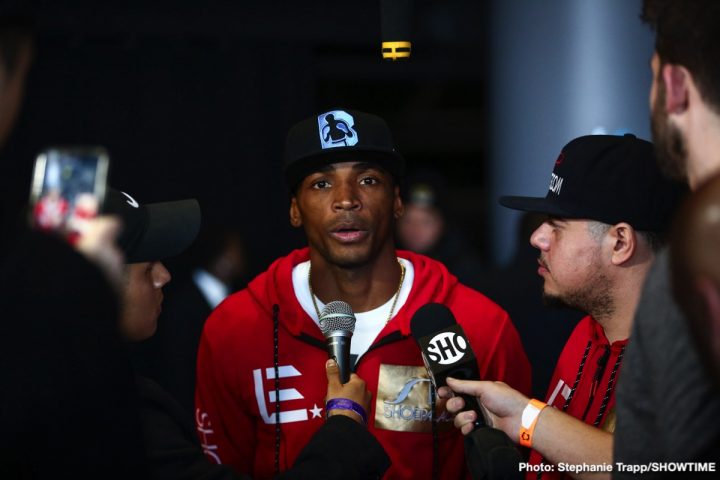 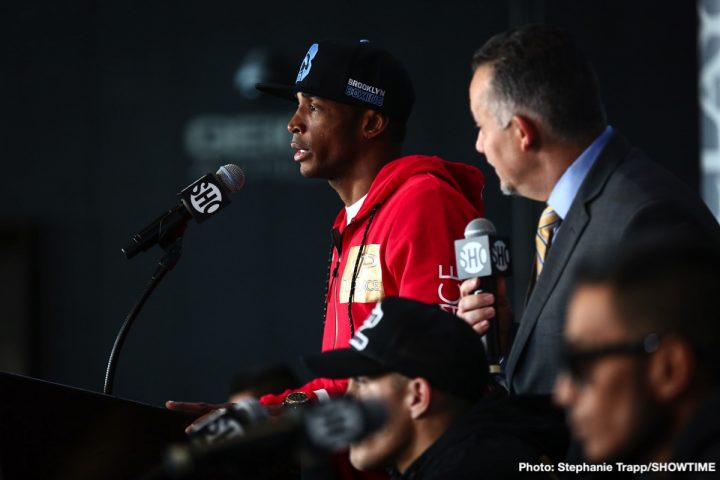 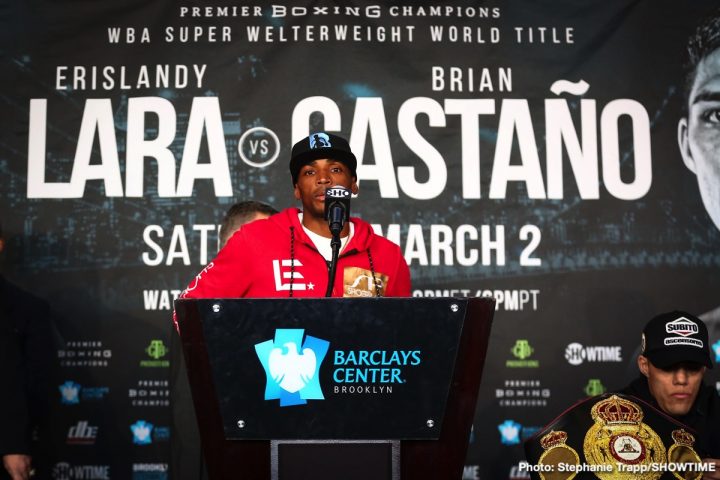 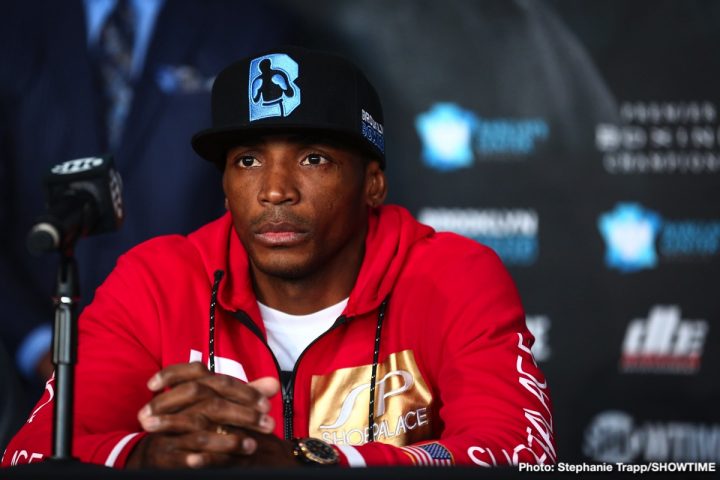