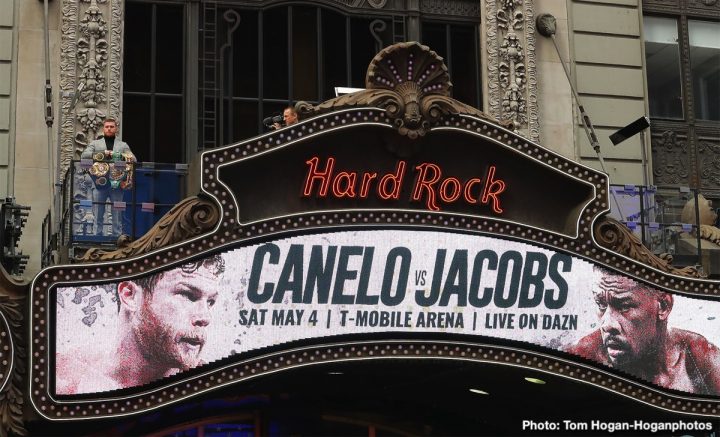 By Aragon Garcia: There seems to be some disagreement between Daniel Jacobs and Golden Boy Promotions, the promoters for Saul Canelo Alvarez, in regards to the second day weigh-in that will be taking place on the day of the fight on May 4.

The secondary weigh-in limit is 170 pounds on the morning of the fight. If Jacobs needed to rehydrate into the 180s for the fight, then it might be a problem for him to withhold fluids to keep his weight at 170 and below.

Jacobs (35-2, 29 KOs) is saying that Golden Boy Promotions insisted on the 10 pound rehydration limit for the second weigh-in being part of the contract for the fight, even though the International Boxing Federation had done away with that rule for unification fights. Canelo was asked about the weigh-in, and he said it was part of the IBF’s rules. Jacobs is saying that’s not so. He says it’s Golden Boy wanted the second day weigh-in on the day of the fight, and he doesn’t like it. Jacobs sees it as a move by Golden Boy for them to try and game the system to get an advantage for their fighter Canelo (51-1-2, 35 KOs) on the night of the fight. Theory would be that if Jacobs has to keep his weight down within 10 lbs overnight after weigh-in on Friday, May 3, he’ll be potentially weakened on the night of the fight on May 4 due to the secondary weigh-in that he’ll need to participate in. If it’s part of the contract for the Canelo-Jacobs fight, it might not be a situation where Jacobs can simply skip the secondary weigh-in on the night of the fight like he did against Gennady Golovkin in their unification match in 2017.

“The IBF ruled out for unification bouts that there’s no second-day weigh-in,” Jacobs said to Fighthub. “But Golden Boy put it in the contract, so that would be a question that I would like to know.”

With both fighters needing to comply with the secondary weigh-in on the day of the fight, it’s hard to see where Canelo and Golden Boy Promotions are coming out ahead in the fight. Further, Jacobs admits to taking part in a secondary weigh-in for his last fight, so it shouldn’t be a problem for him to do it once again unless he’s bulked up during training camp for the Alvarez fight. It would be an issue if Jacobs has bulked up for the fight. But if not, then it’s non-issue, except in Jacobs’ mind.

Jacobs was shocked at learning that Golden Boy are saying that the IBF is the one behind the rehydration limit on the morning of the fight. Jacobs had to deal with the rehydration limit in his last fight against Sergiy Derevyanchenko last October in battling for the vacant IBF 160 lb title. Jacobs still won the fight by a 12 round split decision by the scores 115-113, 115-113 for Daniel, and 114-113 for Derevyanchenko. The secondary weigh-in is going to effect Canelo as well as Jacobs. It shouldn’t be an issue for the fight. Both guys are said to be big enough to compete at super middleweight, so it’s not like one of them is going to be hurt more than the other. One can still understand Jacobs being upset if he feels that Golden Boy was trying to gain a little edge for Canelo, such as it is. The location of the fight with it taking place at the T-Mobile Arena in Las Vegas, Nevada, might be a much bigger problem that Jacobs, 32, is facing than the secondary weigh-in that Golden Boy supposedly inserted into the contract to keep Danny from rehydrating a massive amount overnight after weighing in on May 3.

“So we got this on camera? Golden Boy said [that],” Jacobs said. “I think [Golden Boy] is looking for any way, shape or form, to get an advantage. And this is not something that they’re not used to doing.”

If Golden Boy Promotions did put this in the contract for the fight, it was more of a mind game move than one that will improve Canelo’s chances of beating Jacobs on the night. Since both guys appear to rehydrate into the low to mid-180s for their fights, it means they’re equally going to be effected. Golden Boy might have put the 10 pound rehyration limit in to get Jacobs to blow his stack, and lose focus on what’s really important. If Jacobs can’t calmly handle minor issues like this, then he’s going to be easily thrown off his game on the night of the fight, and wind up losing to Canelo. Jacobs needs to roll with the punches, and learn to deal with the smaller things like the rehydration limit. If Jacobs loses the fight, it won’t be due to the weight. He’ll lose because he fought a more talented fighter than him.

The problem is we don’t know what Canelo or Jacobs rehydrate to nowadays, as neither of them have had their recent weights revealed on the night of their fights when they were both fighting on HBO. The network used to ask fighters to weigh-in on the night of their fights. While some fighters like Gennady Golovkin, for example, would agree to be weighed in by HBO on the night of his fights, but others wouldnt agree to it. Canelo and Jacobs are two fighters whose weights weren’t revealed, so it’s difficult to know for sure which of them is going to be effected more by the secondary weight check on the morning of their fight on the 4th of May.

All these different, it’s not the essence of boxing,” Jacobs complained. “This is not championship behavior. Golden Boy and Oscar De La Hoya, he’s a fighter himself, so he knows. It’s very insulting to us as champions and to the sport because you’ve got this #1 guy that regardless of who it was is going to sell out, is going to get the mass public, so you use that to your best benefit which is not right to the sport,” Jacobs said.

In the interview, Jacobs said he didn’t see the second day weigh-in as an issue, and yet he then made a big production out of it, as if the outcome of the fight with Canelo depends on it. If the second day weigh-in isn’t a big issue for Jacobs, then why is he making a federal case out of it by complaining long and hard instead of just accepting it as part of the things that one has to go through to compete at the highest levels in boxing. Jacobs wanted this fight. If wasn’t willing to agree to smaller things like the second day weigh-in, then he shouldn’t have taken the fight. Canelo didn’t need him. He’s got plenty of other fighters he can compete against, like Gennady Golovkin, Demetrius Andrade, Billy Joe Saunders, Rob Brant and Jermall Charlo. Jacobs has wanted the fight with Canelo for years, and now that he finally has the fight, he’s complaining about smaller issues that effects both fighters.

If Jacobs needs to have a weight advantage over Canelo to win, then tells you something about him. Jacobs should be able to win his fights without a weight advantage if he wants to consider himself as one of the best fighters at 160.