Deontay Wilder vs. Tyson Fury II likely for May 18 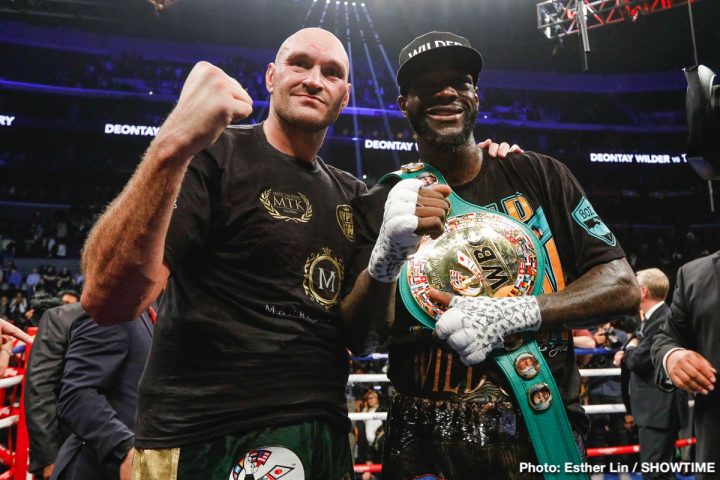 By Trevor McIntyre: WBC heavyweight champion Deontay Wilder says his rematch with Tyson Fury will be taking place in May. Wilder (40-0-1, 39 KOs) doesn’t have a date or venue yet, but Mike Coppinger says he’s hearing May 18 could be the date.

Wilder says he’s going to make sure that when he knocks Fury down, he doesn’t get back up like he did last December in their fight on SHOWTIME PPV at the Staples Center in Los Angeles, California. Wilder dropped the 6’9″ Fury twice in the later rounds, but he kept getting back up, and was able to salvage a draw. Wilder thinks that referee Jack Reiss gave Fury a long, which allowed him to beat the count. Some boxing fans wondered why there was a count given at all to Fury in the 12th, as he appeared to be unconscious for the first five seconds of the count. In this day and age, referees stop fights right away when a fighter appears to be unconscious. Wilder says Fury won’t make it past the seventh round the next time around, as he’s going to take his time, stay calm, and not rush the job like last time.

“It’ll be in May. We don’t know the specific date yet, but it’ll be in May,” Wilder said to Helen Yee Sports about when his rematch with Tyson Fury will take place. “It’s going to be an amazing fight. Like I said, I told you I was going to make him go timber. I told you I was going to knock him out. I did both of those things. He got up, but this time, I guarantee you, he will not get up. He will go down. He will not get up. America has a bad ass in Deontay Wilder. I’m going to do it, baby,” Wilder said.

Fury will likely be using even more movement, and feints to keep Wilder off balance. Wilder mentioned that he gave up on throwing body shots too early in the fight. He’s not going to do that in the rematch. The midsection is one area where Fury is vulnerable, because he’s soft there, and he cant duck away from those type of shots the way he can with his head. Fury did a lot of movement and leaning away from Wilder when he would try and hit him to the head, and that made it next to impossible for him to land.

“I started out in the first round working the body, and then I switched it up. I wanted to get him out of there,” Wilder said about Fury. “I wanted to do what I always do anyways, which is to knock him out. I got overly excited. So I’m going to go in there [in the rematch with Fury] and be calmer, and I’m going to follow through with the game plan. I’m going to get him out a little easier, and faster than the first time. I can tell you right now this fight isn’t going passed the 7th round. I can tell you that for sure,” Wilder said.

Wilder did well when Fury would stop moving. When Fury was stationary, Wilder landing some big shots. Many of the rounds that went to Fury were ones where Wilder hit him with four or five very hard punches that would have knocked out a lot of heavyweights in the division. The judges seemed to to ignore Wilder’s harder landing shots, and focus instead on Fury’s lighter shots. The scoring seemed to be going Fury’s way with the judges preferring his jabs over Wilder’s power shots. At the end of the fight, the scoring came down to the whims of the judges. They felt that Wilder’s harder shots weren’t as important as Fury’s movement, which was basically him trying to minimize the amount of shots that he would get hit with. Wilder needs to understand that in the rematch, he might get a set of similar judges, and he’s going to need to make sure that the fight doesn’t go to the scorecard if he wants to win.

“It [the count] was definitely too long,” Wilder said in talking about the count that referee Jack Reiss gave to Tyson Fury after he was knocked down in round twelve. “I think Jack Reiss had some smelling spray on his breath or something like that. I definitely felt the count was very long. I saw him ref another fight after that one, and the count was very fast. The guy was getting up at the count of nine, and he waived it off at 10. I was like, ‘What was the situation in my fight?’ Controversy sells, and it’s a blessing in disguise to have this. The people that watched the fight the first time probably doubted Fury. This time I’m going in there and there’s going to be more excitement. They saw how the fight was. It was two warriors in there going to war. We knew he had good skills,” Wilder said.

It didn’t appear to be a long count from the referee Jack Reiss in the 12th round of the Wilder vs. Fury fight. It looked more like Reiss decided not to stop the fight when it was pretty clear that Fury was out cold. That’s the thing that was the most questionable about what Reiss did. When you got a guy that hurt, it looks bad if you’re going to give him a count. What would have happened if Fury was seriously hurt, and the seconds that Reiss wasted in counting while he was unconscious were seconds that delayed the medical team from entering the ring to help him. That’s the issue that a lot of boxing fans had with the way Reiss handled the knockdown in the twelfth round. A lot of referees would have stopped the fight right away if they saw Fury in the same condition he was in the twelfth round after Wilder knocked him down with a vicious right-left combination to the head.

Sources: Deontay Wilder and Tyson Fury have agreed on most of the major deal points for their heavyweight title rematch. The PPV fight will likely take place May 18, but April 27 also in play. The two sites under consideration: Barclays Center and MGM Grand Garden Arena