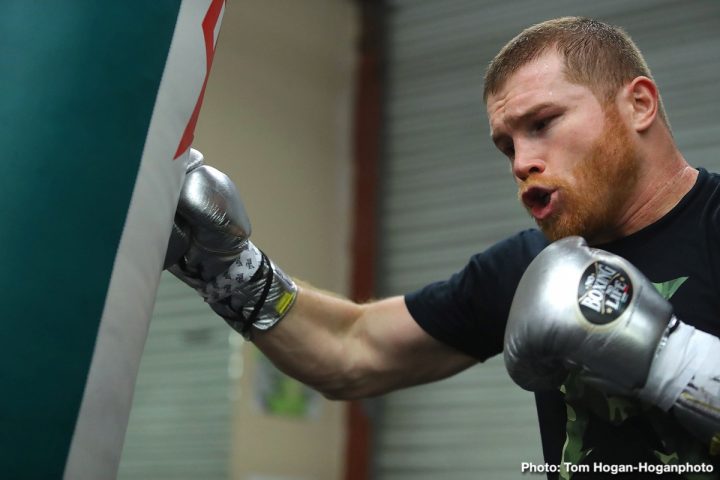 By Aragon Garcia: Saul Canelo Alvarez says he’s “already training” for his May 4 unification fight against IBF middleweight champion Danny Jacobs (35-2, 29 KOs) on Cinco de Mayo on DAZN. There’s almost three months to before the Jacobs fight, and Canelo (51-1-2, 35 KOs) is getting a jump on his competition in preparing for their fight.

Alvarez battered Gennady Golovkin in their rematch last September, and had him so upset afterwards that he stormed out of the T-Mobile Arena in Las Vegas without giving an interview with HBO Golovkin’s loyal boxing fans didn’t like see him get beaten, but there was nothing he could do about it. Golovkin came up against the superior force in Canelo, who really took him to school and showed him how it’s done in beating him on the inside. Ever since that loss, Golovkin has gone quiet, and not said much of anything. Normally fighters complain to the media when they feel they’ve been robbed. When they realize they’ve been beaten, they go quiet and disappear from public view. Golovkin’s low profile since his loss to Canelo can be interpreted to mean that he knows he was beaten, and badly.

Canelo is looking lightning quick with his hand speed, and very powerful right now. He doesn’t look like he has an ounce of fat on him. If the two division world champion Canelo decides he’s going to shoot for an earlier knockout on May 4, Jacobs is going to need to be ready for a hard fight right from the start.

Look at that hand speed from Canelo. His hand speed is at another level than Jacobs’ right now. It might not be easy, Jacobs, 5’11 1/2″, has the height and reach advantage over the 5’8″ Canelo. This isn’t Rocky Fielding that Canelo will be inside the ring with on May 4. Canelo is going to need to go to the body of Jacobs from round one to wear him down, and keep him from running around the ring for the entire fight like he did against Gennady Golovkin two years ago in their fight in 2017. Jacobs gave GGG major problems in losing a controversial 12 round decision. Golovkin fought a poor fight by not pressuring Jacobs, and not investing to the body the way that Canelo will.

Earlier on Wednesday, it was revealed by Canelo’s promoters at Golden Boy Promotions that his fight with Jacobs, 32, will be taking place at the T-Mobile Arena in Las Vegas, Nevada. This venue has become far and away Canelo’s favorite spot for him to fight.

“I’m thrilled that this huge night has landed in Las Vegas,” Jacobs said. “I made my debut there in 2007, but I haven’t boxed there for nearly nine years. Scheduling the biggest fight of my career at T-Mobile Arena is the perfect occasion to return to the bright lights and shine on a massive stage,” Jacobs said.

Jacobs would still prefer that the fight with Canelo take place in his hometown of New York. Jacobs’ management was able to negotiate a fight with GGG in New York, but Canelo isn’t going to put himself at a disadvantage the way Golovkin did.

Canelo has the power to take Jacobs out if he goes to the head. Jacobs’ chin has betrayed him in the past in his knockout loss to Dmitry Pirog in 2010, and he’s also been hurt against Golovkin, Sergio Mora, Ishe Smith and Michael Walker.

“My legacy is on the line and I have a lot to gain,” Jacobs said. “I want to be a Hall of Famer one day, and this is the sort of fight that will get me there.”

Jacobs is too focused on the end of his career rather than fight by fight, which is what true warriors think about. They don’t worry about how they’ll be perceived at the end of their career. They put emphasis on winning each fight.