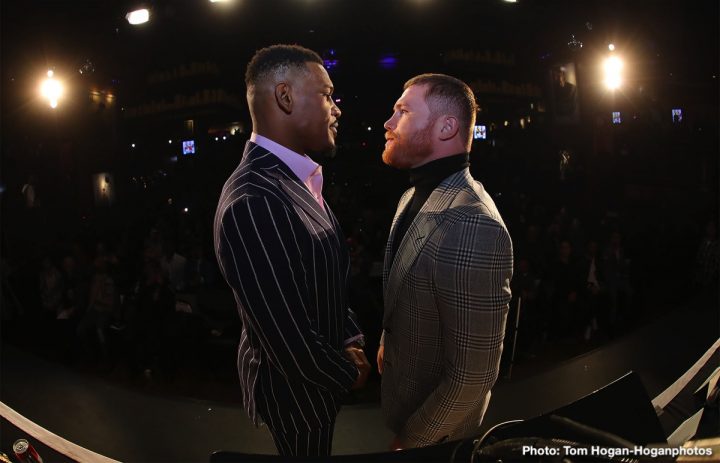 By Sean Jones: A taller than normal looking Saul Canelo Alvarez met with IBF middleweight champion Daniel Jacobs on Wednesday for their New York City press conference to discuss their unification fight on DAZN on May 4 at the T-Mobile Arena in Las Vegas, Nevada. The two fighters said the basic stuff about how they were going to prepare hard to win the important 160 lb unification fight on the 4th of May, but what was really interesting was how tall Canelo looked. Canelo looked he’d undergone a recent growth spurt since his last fight against Rocky Fielding last December. Is Canelo still growing at 28?

This writer isn’t the only that noticed that the 5’8″ looked a couple inches taller than normal during the news conference. The question did Canelo intentionally wear lifts in his shoes to brig his height closer to the 5’11 1/2″ Jacobs, and if so, will he use those same elevator shoes on the night of the fight? Will Canelo gain and advantage if he’s platform shoes on the night? It’s going to be amusing to say the least if Canelo walks into the ring and is suddenly the same height as the 5’11 /1/2″ Canelo.

“In boxing anything can happen,” Canelo said on Wednesday at the New York news conference with Danny Jacobs, when asked if he believes he’ll score a knockout on May 4. “We go in there looking for a knockout, but we prepare for 12 rounds, and we expect the unexpected. We’re ready for it,” Canelo said.

It would be better for WBA/WBC middleweight champion Alvarez (51-1-2, 35 KOs) not to try too hard looking to get a knockout in this fight. If Canelo starts throwing left hooks with mean intentions, he could get knocked out in the first round like Peter Quillin did when he came out swinging in his fight with Jacobs in 2015. Quillin thought he could nail Jacobs with left hooks, he got clipped with a right hand, and badly stunned. Jacobs then flurried on him until the referee had to step in and halt the fight. Canelo is better off focusing on trying to win a 12 round deciion like in his last fight against Gennady Golovkin last September. Fighting smart is the best thing Canelo can do in this fight, because that’s what Jacobs will be doing. No, obviously, Jacobs will be looking for a knockout, because he knows he’s fighting in Canelo’s venue at the T-Mobile Arena in Las Vegas on the night, and it might not be possible for him to win a decision in that place unless he really whips him badly. When you’re the visiting fighter, you have to figure that you start the fight five rounds down right from scratch. Jacobs will need to come out guns blazing from the opening round in order to catch up to Canelo to even the fight out.

“I’m going to train to see the best Canelo we’ve yet to see,” Jacobs said when asked if he thinks Canelo will do a better job than Golovkin. “When I step into the ring on May 4, it’ll be the last hurdle I have to step in, because I’ll become the middleweight champion, the best fighter in my division.”

It’s pretty clear that Golovkin is the better fighter than Canelo. We saw that in their two fights. Never mind that GGG failed to get the win against Canelo, the boxing public still saw GGG as the better fighter of the two. Jacobs matches up better against Canelo than he did against Golovkin. Jacobs has NEVER lost to to a short fighter of Canelo’s stature. Jacobs has ALWAYS done well against shorter fighters. The only guys that have given Jacobs problems during his career was the 5’11” Dmitry Pirog and 5’10 1/2″ Golovkin. Canelo is considerably shorter those two guys. Of course, if Canelo wears lifts in his shoes on the night of the fight, it could put him close to the same height as Jacobs. That might not help Canelo either though, because even thought he’d be taller if he were wearing elevator shoes, he’ll still have the shorter reach than Jacobs by three inches. That’s not something that Canelo will be able to change no matter how tall he is if he were platform shoes.

“When I saw him [Jacobs] fight Gennady Golovkin, and the final bell rang, I said, ‘Jacobs has done it! Jacobs has done it,'” Matchroom Boxing USA promoter Eddie Hearn said about Jacobs. “I thought the Gods are going to give him this win. They didn’t, because they waited for this moment for him [to beat Canelo to become the unified champion] to out on this platform [DAZN] against the best in the world to create a legacy that is never forgotten in the sport of boxing. I’ve never been so confident in a 50-50 fight. I believe on May 4th, we’ll [Jacobs] become the unified champion of the world. Cinco de Mayo is a great celebration for Mexican people, but not this year,” Hearn said.

Jacobs’ promoter Eddie Hearn was obviously worked up at the news conference on Wednesday in New York, so you kind have to ignore his exuberance. Jacobs did a good job in the second half of the fight against GGG in 2017, but he still lost the fight. Jacobs didn’t do enough in the first half of the contest, because he ran from Golovkin, and got knocked down. If Jacobs had stayed on his feet, and mixed it up with Golovkin in the first six rounds, he would have had a chance of winning. But if Jacobs had slugged with Gennady early on, he might have gotten knocked out. Jacobs did what he felt he had to in order to have his best shot at winning, and that was to avoid Golovkin like the plague until round seven. You give away the first six rounds like Jacobs did against Golovkin, you’re not going to win the fight.

It’s going to be a difficult fight for Canelo, because Jacobs is taller, faster, stronger and he moves better. Jacobs almost every advantage in the fight other than the venue, which as this writer pointed out, could prove to be a big advantage from the very start for Alvarez. If Jacobs can come on strong from the very beginning, he might be able to get the decision. 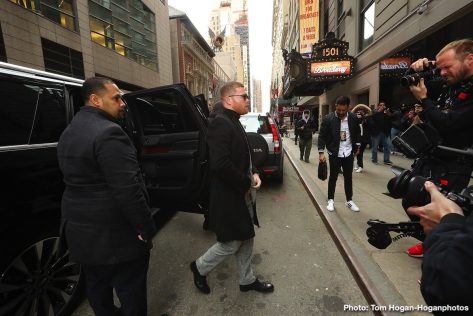 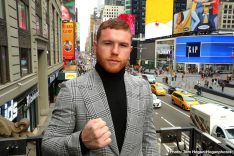 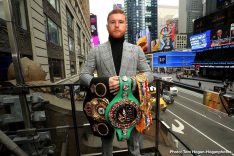 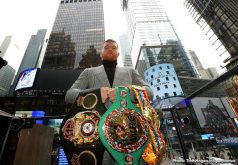 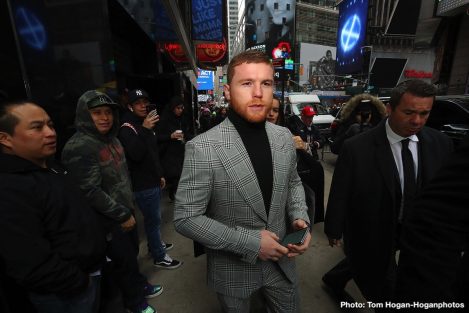 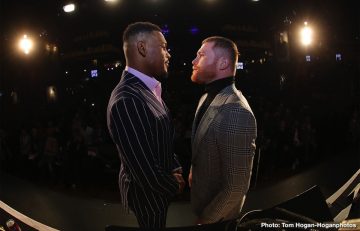 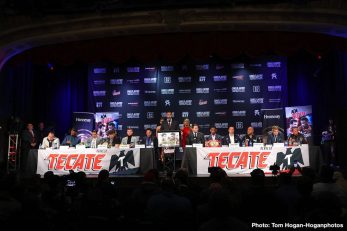 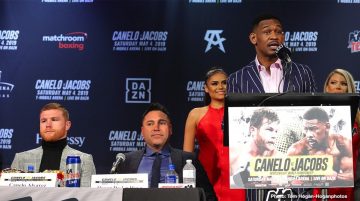 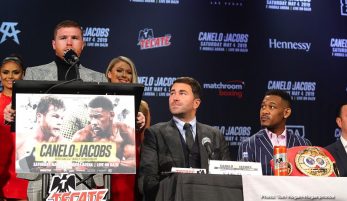 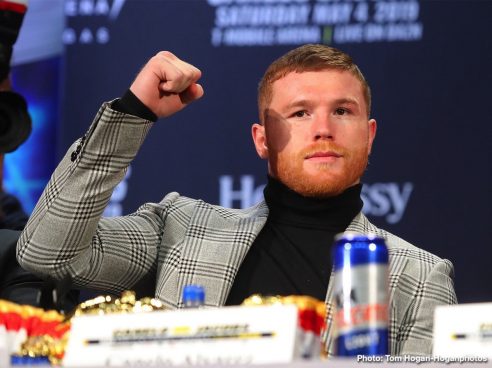 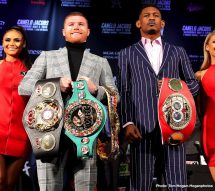 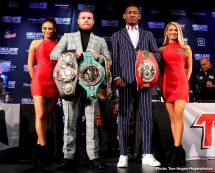 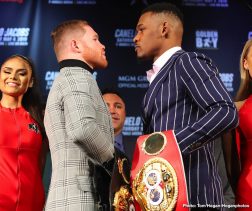 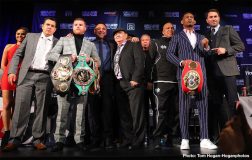 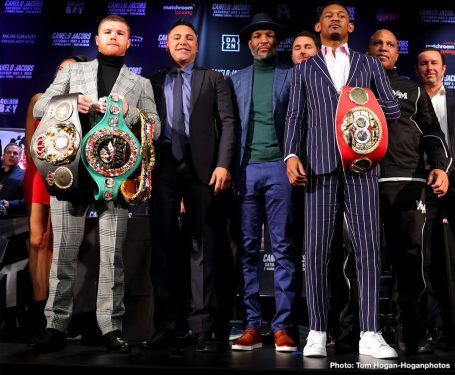 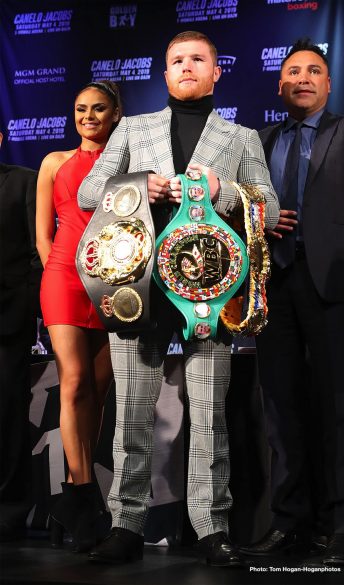 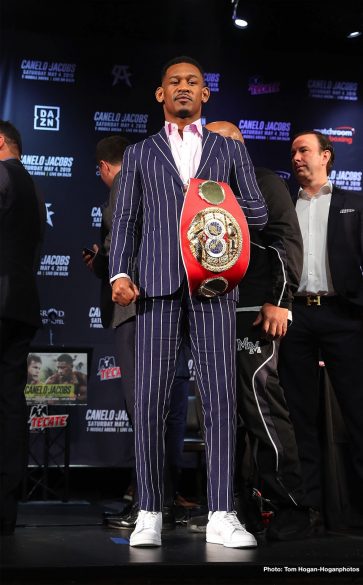 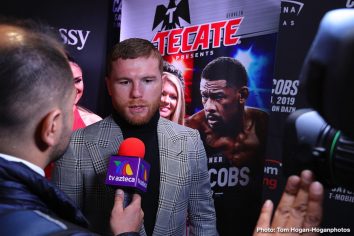 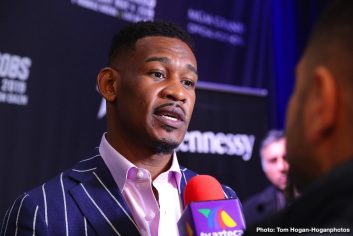