Terence Crawford vs. Amir Khan at MSG, NY on April 20 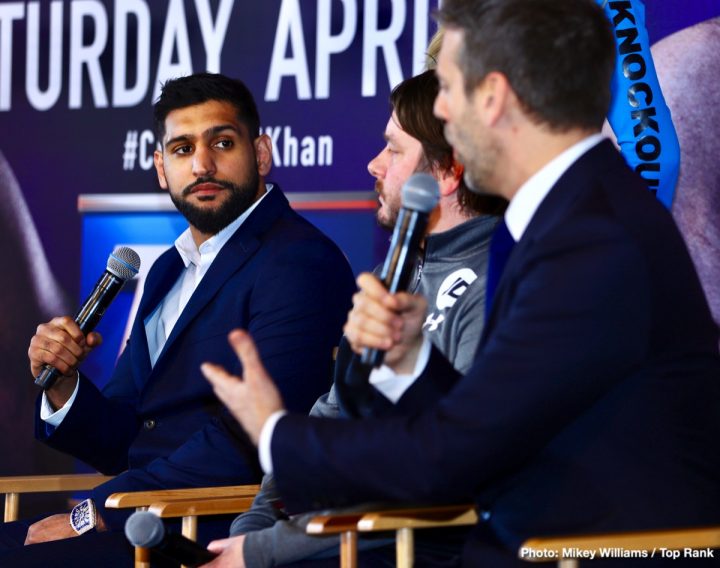 This is a good venue for both Crawford and Khan, as there will be a lot of boxing media that will be on hand to see it. Crawford has been fighting a lot in his hometown of Omaha, Nebraska, which is kind of an out of the way venue for a lot of fans. The Crawford-Khan fight will be shown on ESPN pay-per-view. This is ESPN’s first pay-per-view fight for boxing. Given that how little Khan has done with his career in the last eight years, it’s going to take a lot of marketing from Top Rank and Matchroom Boxing to get fans interested in purchasing the fight on PPV.

Khan lost his IBF/WBA light welterweight titles to Lamont Peterson in 2011, and he’s been been a champion ever since. Eight years is a long time for a fighter like Khan to be stuck in the contender stage. Guys like Adrien Broner was able to win four division titles despite having less than the best talent, whereas Khan hasn’t been able to snatch another world title belt since his loss to Peterson. Khan challenged WBC middleweight champion Saul Canelo Alvarez for his title in May 2016, but he was stopped in round six after being unconscious by the Mexican star.

Crawford, 31, wants to become a star outside of his home state of Nebraska. The best way for him to do that is to start fighting in California, New York and Las Vegas, Nevada. Crawford could have chosen to keep fighting in Omaha, Nebraska for the remainder of his career, and done well fighting in that city. He would never be the star that he wants to be. However, it’s not enough for Crawford to fight in cities like New York and Las Vegas. He also needs to fight better opposition. Khan would have been a great choice for Crawford to fight if this contest had taken place eight years ago in 2011, before Khan was beaten in consecutive fights by Peterson and Danny Garcia. But for the Cawford-Khan fight to take place right now, it’s not the fight to make Terence a bigger name in boxing. Crawford needs to fight the likes of Errol Spence Jr., Mikey Garcia, Shawn Porter, Manny Pacquiao, Danny Garcia and Keith ‘One Time’ Thurman. Of those six fighters, Spence is Crawford’s best option of the bunch. Spence wants to fight Crawford. The other fighters from that group hasn’t expressed interest in fighting him.
.
This will be the second time for Crawford to fight on pay-per-view. He fought Viktor Postol on HBO PPV in 2016 in a fight that brought in 50,000+ PPV buys. Arum is predicting Crawford vs. Khan does 1 million+ buys on ESPN. That’s an incredibly high total given Crawford’s previous effort on HBO PPV. Arum still thinks the Crawford-Khan fight will do one million buys because of ESPN being a “mega-phone” with the huge reach the network has in attracting a lot of casual boxing fans that will stumble on the Crawford vs Khan fight and promptly order it for the $75.99 that it sells for.

Crawford defeated challenger Jose Benavidez Jr. by a 12th round knockout last October. It wasn’t the best performance from Crawford, who was taking shots the entire night by the taller 5’11” Benavidez. Without the huge size advantage that Crawford had enjoyed while fighting at light welterweight, he looked like a completely different fighter. Things obviously aren’t going to be as easy for Crawford at 147 as they were when he was beating up smaller fighters at 140.

Khan surprised a lot of boxing fans by choosing not to take the bigger payday fight against Kell Brook. That was the fight that was being slowly built by his promoter Eddie Hearn. Khan switched things up and chose to fight Crawford for his WBO welterweight title instead of taking the bigger payday against Brook. Khan has made it clear to Hearn that he’ll be facing Brook next. The interest in the Khan-Brook fight might not be the same though if Khan suffers a knockout loss to Crawford like many boxing fans believe will be the case.