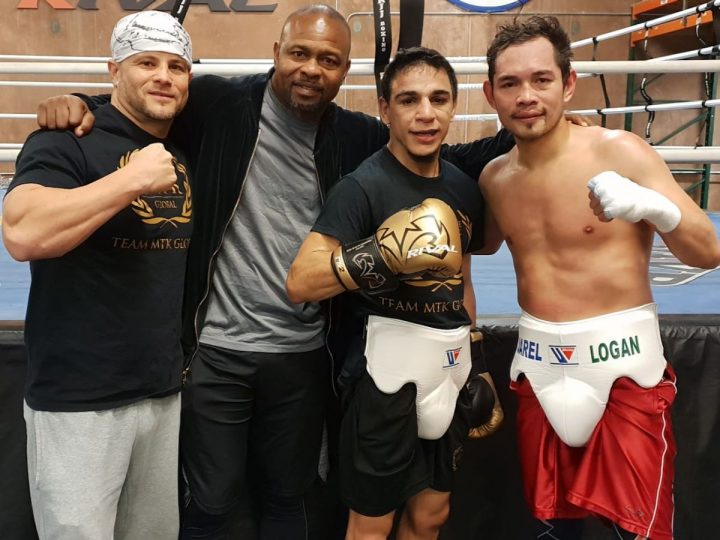 Boxing legends Roy Jones Jr and Nonito Donaire are in no doubt Nordine Oubaali will be successful in his bid to become world champion on January 19.

Bantamweight Oubaali (14-0-KO11) clashes with Rau’shee Warren in Las Vegas for the WBC world title and after a fantastic spar with Donaire, hopes the famous belt is heading to France are high.

Both boasting world titles in FOUR weight divisions, both Donaire and Jones Jr are in buoyant mood in Oubaali’s camp.

Donaire said after the spar: “Nordine is an amazing fighter and I think he’ll become world champion in this fight.

“His power is something you really feel when you’re in there with him and I really think he’s going to go in there and do a good job.”

Jones Jr added: “To see two world class guys go in and for Nonito to come and help Nordine out, you don’t find better people in the world than that.

“These guys are my favourites. These are the type of people who come through when you need it. No southpaw would give him rounds but Nonito came through and he gave him rounds.

“Nordine did a great job and he’s on point. Thanks to Nonito for coming through – now Nordine is ready to go and become champion of the world.”

Oubaali vs. Warren will be broadcast on ITV4 in the UK, Showtime in the US, ABS-CBN in Morocco and a French broadcaster to be announced in due course.

World-ranked welterweight Michael McKinson is inspired by confirmation of his fight with the hard-hitting Ryan Kelly.

Having disposed of Sam McNess in impressive style at York Hall last time out, McKinson is keen to kick off a potentially huge 2019 with victory over a man whose power he respects.

McKinson said: “There’s no doubt that Ryan Kelly is a massive threat. He’s a big puncher and he’s coming down from the weight above. He’s very strong.

“To be honest, I only really like taking these kind of fights – the ones in which people don’t back me 100% and the reason is simply because I like proving people wrong.

“Winning this will get me closer to the big names I’ve been calling for. This is a very tough test in front of me but I look forward to it. I welcome the challenge.

“The added pressure of a hostile atmosphere makes me perform better. I like it. It’s what I need and it really helps me to raise my game.”

In addition to the title fight between McKinson and Kelly, Mikey Sakyi defends his Southern Area super-lightweight crown against Id Hill with a lengthy undercard to be announced shortly.

MTK Global is proud to announce the signing of Qatar’s first ever Olympic boxer, Thulasi Tharumalingam.

‘TTT’ (4-0-KO2), who is currently based in Germany, competed at the Rio 2016 Games and has since racked up a quartet of impressive victories as a professional.

“I hope to provide a figurehead for the growth of boxing in Qatar and my ultimate aim is to become a world champion. I proved I am capable of competing at the highest level as an amateur by reaching the Olympics and I want to do even better in the professional game.

“Now I am aligned with the best in boxing management, I can fully focus on becoming the best fighter I can be safe in the knowledge the business side of my career is taken care of. I’m determined to reach the top.”

MTK Global Head of Business Development Dr. Mirko Wolf added: “I’m delighted to welcome Thulasi to the team. I’ve watched his development for some time now and the first thing I noticed about him was that his style is more suited to the professional game than the amateur game.

“Being an Olympian, ‘TTT’ has already proven himself to be not just the better fighter out of Qatar but out of the whole Arab region.

“Tharumalingam has a multi-cultural background and that is something we actively support here at MTK Global, where equality and opportunity is for everyone.”


« Hearn says Liam Smith will fight for World title in 2019