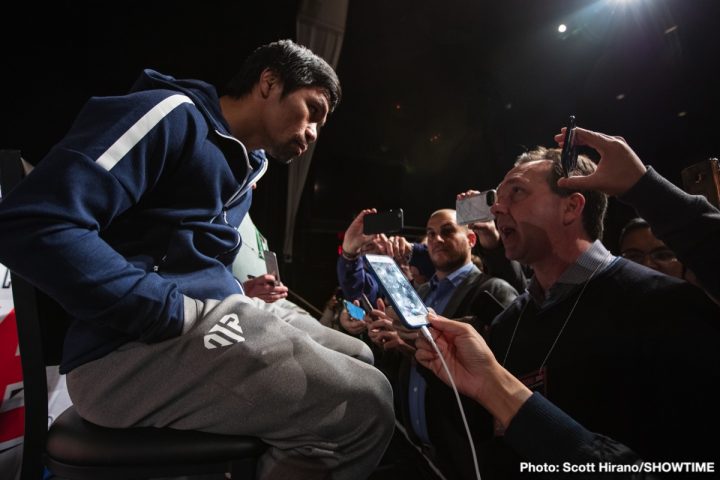 By Chris Williams: Manny Pacquiao (60-7-2, 39 KOs) will be getting a huge guarantee of $10 million plus a percentage of the profits for his title defense of his WBA secondary welterweight title against Adrien Broner (33-3,-1, 24 KOs) on Saturday night at the MGM Grand in Las Vegas, Nevada. Pacquiao-Broner will be televised on SHOWTIME PPV.

It goes for $74.99. That’s not too far off from the $99 the Mayweather vs. Pacquiao ‘Fight of the Century’ PPV bout went for in 2015. With the asking price being somewhat steep for this Saturday’s Pacquiao-Broner fight, it’s going to be interesting to see how many buys the fight hauls in.

Broner is no longer the fighter that he was years ago, and neither is Pacquiao. Although Pacquiao is currently a world champion, that’s because he only had to beat 36-year-old Lucas Matthysse to accomplish that task.

For Pacquiao, the $10 million guaranteed purse is a long distance from the $20 million he was making per fight during his best days of his career when he was with Top Rank. Pacquiao made a massive amount of money during his prime with Top Rank. His payday against Floyd Mayweather Jr. in 2015 was massive.

Depending on how many buys the Pacquiao-Broner fight generates, Pacquiao could get a big payday out of this fight. Broner too. Adrien’s $2.5 million guaranteed purse alone gives him a nice payday. That’s not bad for a fighter that is just a contender, and looking at poor prospects of him ever winning another world title again.

It’s quite possible that Broner’s days of being a world champion ended with him losing his WBA light welterweight title in April 2016, when he failed to make weight for his title defense against Ashley Theophane in 2016. Broner hasn’t fought for a world title since then unless you want to count the vacant World Boxing Council Diamond light welterweight belt as a world title. In the eyes of a lot of boxing fans, the WBC Diamond strap is just one of the WBC’s made up belts that they hand out for special events, but it’s not a world title that the other fighters look to go after in order to raise their standings in the sport.

The 29-year-old Broner a guaranteed purse of $2.5 million plus a percentage of the profits, according to Dan Rafael. That’s good money for Broner. If this fight generates 1 million+ PPV buys on SHOWTIME, Pacquiao and Broner will do extremely well with the extra money they make from the PPV upside.

The money Pacquiao and Broner will take in from this fight pales in comparison to what the winner will get if they get a fight against Floyd Mayweather Jr. in September. It’s believed that the winner of the Pacquiao-Broner fight will take on Mayweather in September in a big PPV bout. Unfortunately for Broner, he’s expected to beat Pacquiao on Saturday, so he’s not likely to get the fight against Floyd.

Other purses are as follows: