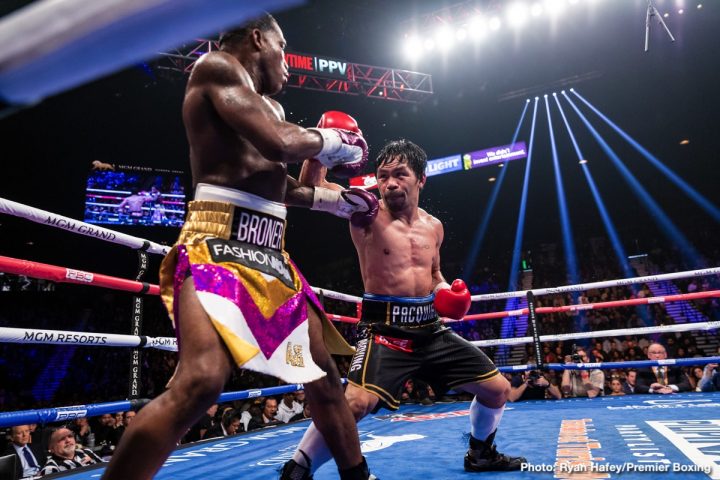 By Allan Fox: Manny Pacquiao (61-7-2, 39 KOs) put on a masterclass performance in beating Adrien Broner (33-4-1, 24 KOs) last Saturday night, and then immediately called out Floyd Mayweather Jr., challenging him to rematch if he’s willing to return to the ring. Pacquiao, 40, might have looked a little too good in beating the Mayweather-esque Broner, as he really had his way in giving him a one-way thrashing for 12 rounds in front of a packed ground at the MGM Grand in Las Vegas, Nevada.

Mayweather was at ringside last Saturday night, and he no doubt was judging whether he would be able to beat Pacquiao. The fact that Mayweather didn’t come out after the fight and say definitely that he wants to fight Pacquiao next is a strong indication that he doesn’t like his chances of winning. When you have the spotlight on you like Mayweather had last night, you take advantage of it by telling the boxing media that you want to come back and fight Pacquiao. Mayweather didn’t do that, which could mean that he doesn’t feel he’s up to it.

For Mayweather not to come back to fight Pacquiao now, it’s a huge compliment to the Filipino star, being that it shows that he doesn’t like his chances of winning that fight. As slow as Mayweather looked in his last two spectacle events against MMA fighters Tenshin Nasukawa and Conor McGregor, he would have a lot of problems with the speed and combination punching of Pacquiao. In his recent exhibition fight against 22-year-old Japanese kick-boxer Tenshin, Mayweather looked puffy, flabby and not the youthful fighter he’d been years earlier. Mayweather’s hand speed was gone, and he looked slow, hittble and not capable of beating world class fighters from the boxing world. Mayweather can still beat MMA fighters, but not elite boxers, which you can argue is why he’s not looking to fight any of them.

For the fans at ringside and the ones that ordered the Pacquiao-Broner fight on SHOWTIME pay-per-view, they witnessed an impressive performance from Pacquiao, who turned back the hands of time in beating the much younger 29-year-old Broner. The fight win for Pacquiao clearly sent a message to Mayweather. If he’s going to come back, it’s going to be a different story than the first fight between Mayweather and Pacquiao in 2015.

Mayweather won that fight, albeit against an injured Pacquiao. That fight that took place between an injured Pacquiao, who fought with a wounded right shoulder, and a healthy Mayweather. Even with only one good arm, Pacquiao made it a competitive fight. With Pacquiao now at his best, he’s ready to turn the tables on the retired Mayweather, who hasn’t fought against a true professional fighter from a boxing background since 2015.

Pacquiao might be waiting a long time if he thinks that Mayweather is going to come back. It appears that Mayweather is content to stay retired, as far as fighting against true world class boxers go. That doesn’t mean that Mayweather won’t continue to hustle fights against MMA guys for boxing events, but it doesn’t appear that he’s interested in fighting elite level fighters. Unfortunately for Mayweather, he can’t make money hustling fights against 2nd and 3rd tier boxers. The only guys that the boxing fans want to see Mayweather fight are talented boxers like Saul Canelo Alvarez, Errol Spence, Keith Thurman, Terence Crawford or Gennady Golovkin. The chances of Mayweather fighting those guys are about zero. When you’ve got a fighter that is arguably protecting his unbeaten 50-0 record, you’re not going to see them fighting world class boxers like those guys. Instead, you’ll see them talking MMA fighters into fighting in boxing events to be sold to casual fans.

With a rematch against Mayweather not a likely option, Pacquiao, 40, will need to turn his sights to facing the winner of the March 16 fight between IBF welterweight champion Errol Spence Jr. (24-0, 21 KOs) and Mikey Garcia (39-0, 30 KOs). Pacquiao would be showing huge bravery in fighting the winner of the Spence-Garcia fight, as it’s expected to be Spence winning that fight, and he’s clearly the best fighter in the welterweight division. That’s not a knock on the highly rated but untested WBO champion Terence Crawford, but Spence is on another level. He’s a big welterweight, that could be fighting at junior middleweight. Crawford is a small welterweight, who could still be fighting at light welterweight and probably should, given that he never really proved himself against any of the talented fighters in that weight class like Regis Prograis, Josh Taylor, Jose Ramirez, Ivan Baranchyk, Kiryl Relikh and Maurice Hooker.

Pacquiao looked great last Saturday night with trainer Freddie Roach back in his corner, showing that age is just a number. Pacquiao did a great job of beating a fighter with a Mayweather style in defeating Broner by a 12 round unanimous decision by the scores 117-111, 116-112 and 116-112. Boxing News 24 had Pacquiao winning 11 rounds to 1. It wasn’t a good night for Broner, who looked like a has-been inside the ring. Although Broner was in superb shape, his boxing skills and work rate were sub-par, and not nearly good enough for him to be competitive. It’s a good thing for Broner that Pacquiao wasn’t same age as him at 29-years-old, as he would have likely been knocked out by a younger version of the Filipino star. If this had been the Pacquiao that stopped Oscar De La Hoya in the 8th round in 2008, at age 29, Broner would have been in trouble from the earliest rounds of the fight. He’s not equipped to fight guys like Pacquiao or any of the top elite level welterweights.

Pacquiao’s hand and foot speed was that of a younger fighter, not a 40-year-old. Pacquiao hasn’t lost much of anything from his game in the last 10 years. For some reason, Pacquiao is one of the rare individuals in sports that isn’t aging like other athletes. Mayweather had to have seen the speed, movement and power of Pacquiao and decided that it’s safer to keep putting together fights against MMA fighters with no experience in boxing.

Canelo vs. Jacobs to include 170lb rehydration clause »